A LEGEND IN YELLOW GOLD

At the SIHH (Salon International de la Haute Horlogerie – International Fine Watchmaking Exhibition), the Le Brassus firm presented two new, extra-thin benchmark pieces with yellow gold cases – one of them also has a dial in yellow gold – in the Royal Oak collection, paying homage to their predecessors of 1972 and 1977.

In 1972, 45 years ago, a future legend was born; a luxury sports watch in steel radically different from the timepieces of the period: the Royal Oak. Designed by Gérald Genta (1931-2011), one of the greatest designers in the history of modern watchmaking, this new piece, topped with an octagonal bezel attached with eight hexagonal screws, appeared in yellow gold for the first time in 1977. This coloured metal, which suffered a decline towards the end of the 1990s and was abandoned in favour of white or rose gold, made a comeback less than two years ago. Indeed in 2016 at the SIHH, Audemars Piguet presented several Royal Oak watches in yellow gold (the quartz models, automatic models and those with the chronograph function) which enjoyed great success. The Le Brassus factory is renewing this experience this year with two new Royal Oak Extra-Thin watches. 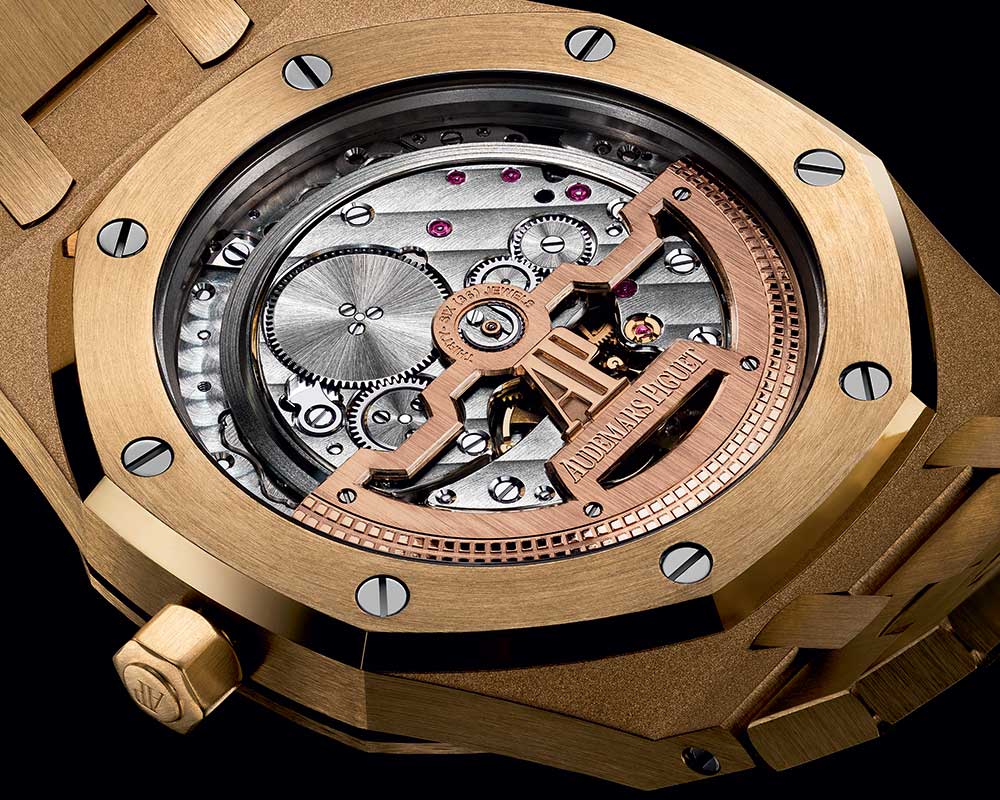 Glowing like the sun, the case of this Royal Oak Extra-Thin watch in yellow gold measures 39mm in diameter (like its predecessor of 1972) by 8mm thick. Like the original Royal Oak of 1972, it has the 2121 calibre, manufactured by Audemars Piguet. This self-winding, mechanical movement measures the hours, minutes and date, and provides a power reserve of around 40 hours.

The dial is available in two colours on this model: a slightly paler blue than the usual shade which goes beautifully with the warmth of the gold, and an intensely-luminous, golden champagne colour which is reminiscent of the elegant watches of the Seventies. These two faces decorated with the “petite tapisserie” motif – the famous checkerboard textured pattern particular to the Royal Oak collection – hold an hour rim made up of luminescent markers. Two hands placed in the centre, also outlined in phosphorescent material, display the hours and the minutes, while the date appears in a display at the 3 o’clock position.