THE SYMPHONY OF TIME AT THE SEASIDE

In tribute to the 30th “Un violon sur le sable” festival, Baume & Mercier has unveiled a limited edition whose dial comes to life with the curves of a string instrument.

The annual “Un violon sur le sable” symphony music festival has been held on Plage de la Grande Conche de Royan beach in the Charente-Maritime, South West France, in late July since 1987. The event lasts a good week and attracts around 50,000 people every night whether they love classical music or just want to see what’s happening. As night falls they come to listen to soloists accompanied by an orchestra of 80 musicians on the fine sand beach stretching 2600m by the Atlantic. Baume & Mercier has sponsored the festival for the last 7 years in a row and has brought out a piece especially designed for the 30th event of its kind: Classima “Un violon sur le sable”. 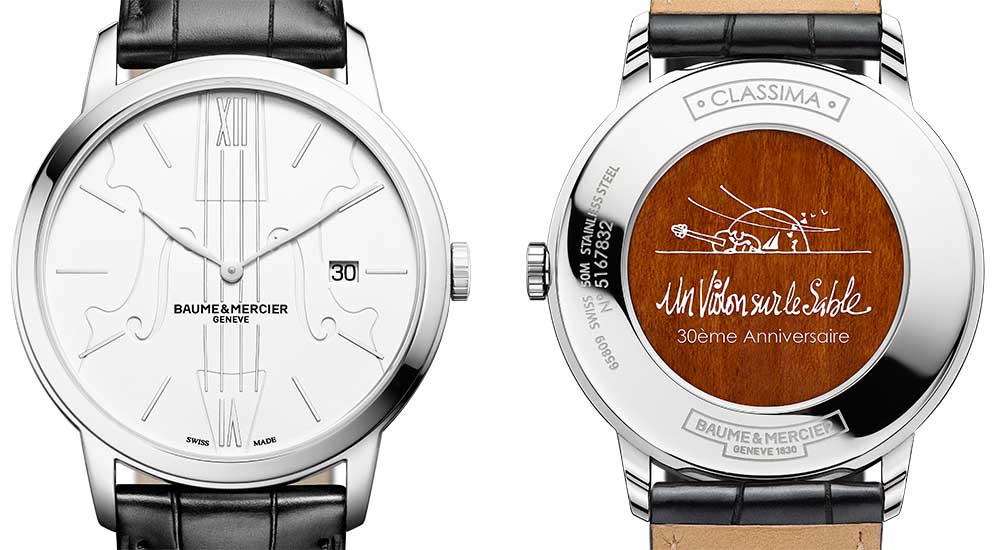 The new watch (330 available) is the third one to have festival ties as Baume & Mercier brought out the first in 2012 for the 25th anniversary of “Un violon sur le sable” and the second in 2014 for the young talent contest. 2017’s Classima “Un violon sur le sable” has a polished steel 40mm case surrounded by a slim bezel. The back is covered in a spruce disc, a type of wood popular in instrument making, bearing the festival logo and the 30th anniversary slogan. The metal case houses a quartz movement that brings to life the hours and minutes (in the centre) and the date (at 3).

The dial is adorned by a silhouette of a violin whose sound boards feature two Roman numerals (12 and 6). Two slim silver leaf-shape hands in the centre track the hours and minutes.