As part of the roadshow inauguration, Alain Delamuraz, Vice-President and Head of Marketing for Blancpain; Laurent Ballesta, marine biologist, photographer and Blancpain partner; and Jörgen Eldevik, Brand Manager Blancpain for the Swiss market, welcomed journalists and friends of the brand to Zurich Airport. Alain Delamuraz discussed the Blanpain brand values: “Our innovative spirit reflects our long- term approach. We invented the Fifty Fathoms, the first modern diving watch, more than 60 years ago. Since then, we have developed significant relationships with scientists, divers, government organizations and other ocean pioneers. Against this background, I am delighted to inaugurate this exhibition and introduce you to our new BOC II.”

The roadshow features several sections, each dealing with themes related to the world of the oceans so dear to Blanpain’s heart. The first covers the history of the brand’s ties with the oceans. The second examines the scientific results of the expeditions sponsored by the Manufacture. The third and final section is devoted to underwater photography with the aim of raising public awareness of the diversity of the underwater world, as well as increasing understanding of the importance of preserving it.

The Zurich Airport Airside Center hosts more than 1.7 million people a month. This constitutes an important number of visits for Blancpain whose aim is to alert the maximum possible number of visitors to this cause. Optimism, long-term vision and innovation are the three basic principles, arising from Blancpain’s DNA that drives the brand’s commitment on behalf of the oceans. The Blancpain Ocean Commitment exhibition will run until February 12 at the Zurich Airport Airside Center. 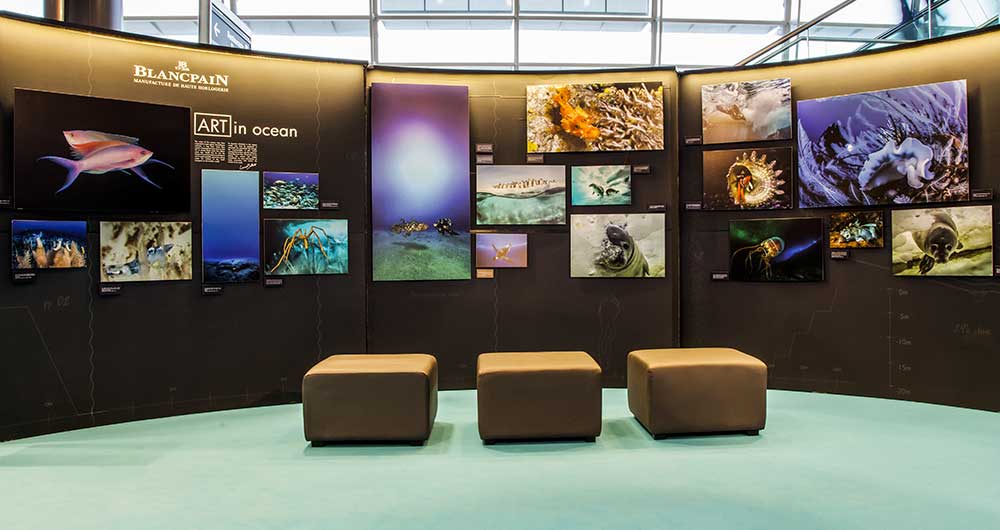 The exhibition also provided an opportunity for journalists to discover the new Fifty Fathoms Blancpain Ocean Commitment II* watch, presented in Switzerland for the first time. This watch is limited to 250 examples and for each piece sold, the sum of 1,000 euros will be donated in support of scientific exhibitions. The 250,000 euros thus raised will be added to Blancpain’s contributions to preserving the oceans.

At this event, guests were treated to a preview of the film, Antarctica, sur les traces du manchot Empereur (Antarctica, in the footsteps of the Emperor penguin), the result of the Gombessa III expedition sponsored by Blancpain. In the wake of the Gombessa I expeditions that revealed the secrets of the coelacanth, the greatest zoological discovery of the 20th century; and Gombessa II, which studied the spectacular spawning of the Camouflage Grouper, Laurent Ballesta and Blancpain achieved a first in terms of exploration, underwater diving and photography. This was the first time that scientific divers have been able to access what lies below the ice flow in Adélie Land. Through this documentary, the latter delivered a testimonial of a world made fragile by global warming. After the film, Laurent Ballesta discussed this experience: “For me, it was the toughest project undertaken to date. Today however, we are delighted with the result. The project would never have reached these proportions without Blancpain’s support.” The film Antarctica, sur les traces du manchot Empereur will be broadcast on Arte on January 28 at 8:50 pm; on January 29 at 3.15 pm; and on March 10 at 3.30 pm.