When the flying tourbillon and flying carrousel meet, watchmaking turns into an art. Blancpain revisits an intricate combination.

Tourbillon and carrousel. Two complications that are as beautiful to look at as they are complicated to produce. Blancpain set itself the challenge a few years back of combining two regulators that are now combinations of legend. The Le Brassus Tourbillon Carrousel associates the two mechanisms, whose aim is to reduce the effects of gravity on the workings of the movement. 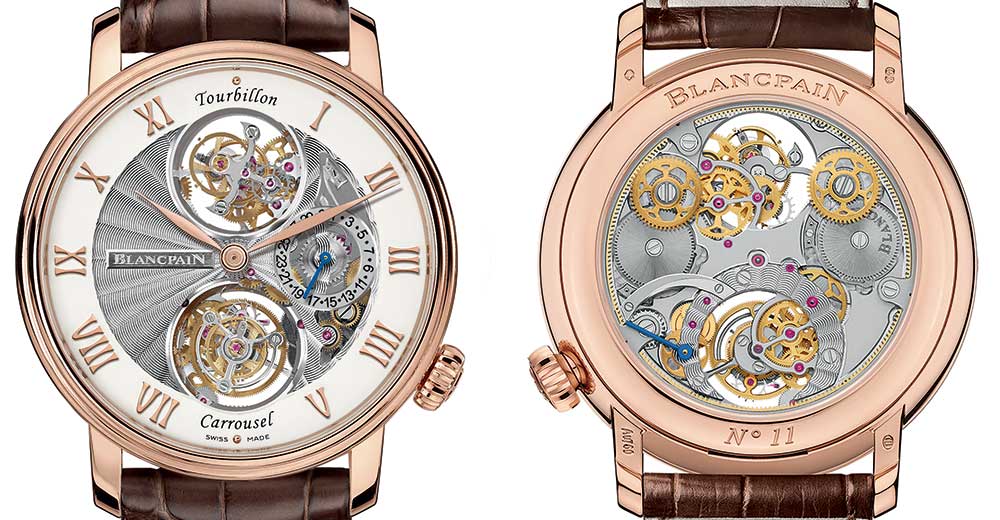 At 12 o’clock, the tourbillon nestling in its cage is linked to the barrel through a unique gear train. So, if the mechanical link stops working, the tourbillon will also come to a halt. The carrousel, at 6 o’clock, is linked to the barrel by two gear trains, one providing the energy needed to drive the escape wheel, and the other controlling the cage’s rotating speed. The two cages are independent of each other, but connected by a differential gear train that transmits the average rate from both regulators to the time display. A mechanism resulting in very precise timekeeping.

These two mechanisms can be seen through a sapphire crystal case back, which also reveals the power reserve indicator. The 44.60 mm red-gold case feels light and pleasant on the wrist, particularly thanks to its slim 11.94 mm width. The dial, meanwhile, features an hour rim made of Grand Feu enamel with gold Roman numerals. An external winding crown can be used to wind the two barrels at the same time while guaranteeing equal winding, again with the aim of providing the watch with maximum precision.