THE PREDATOR OF THE OCEAN DEPTHS

Over 50 years after the birth of the first Fifty Fathoms, Blancpain pays homage to this legendary watch by unveiling a new timepiece inspired by the original model with the famous water-tightness indicator in the lower half of the dial.

The Fifty Fathoms divers’ watch, created by Blancpain, boasts a rich and fascinating history. It is based on two events that emerged in parallel and later dovetailed. First, the projects launched by Jean-Jacques Fiechter (born in 1927), CEO of Blancpain for three decades (from 1950 to 1980) and a big fan of scuba diving, which led to three patents, and above all to the first Fifty Fathoms model. Secondly, the research carried out by the founders of the French Navy’s combat swimmers unit, set up in 1952, Robert Maloubier (1923-2015) and Claude Riffaud (1924-2016), to find a reliable diving watch, and which led to the three men meeting. The Fifty Fathoms was adopted by the French Navy in 1953. Between 1957 and 1958, the watch was provided with a water-tightness indicator, which turned from white to red when there was liquid in the case. This was the Fifty Fathoms MIL-SPEC 1. From 1958, the model was also adopted by the US Navy, particularly by members of such elite groups as the UDT (Underwater Demolition Team) and the Navy SEALs. This version of the Fifty Fathoms is the one that Blancpain is now celebrating, with the Tribute to Fifty Fathoms MIL-SPEC, a special limited edition with 500 pieces. 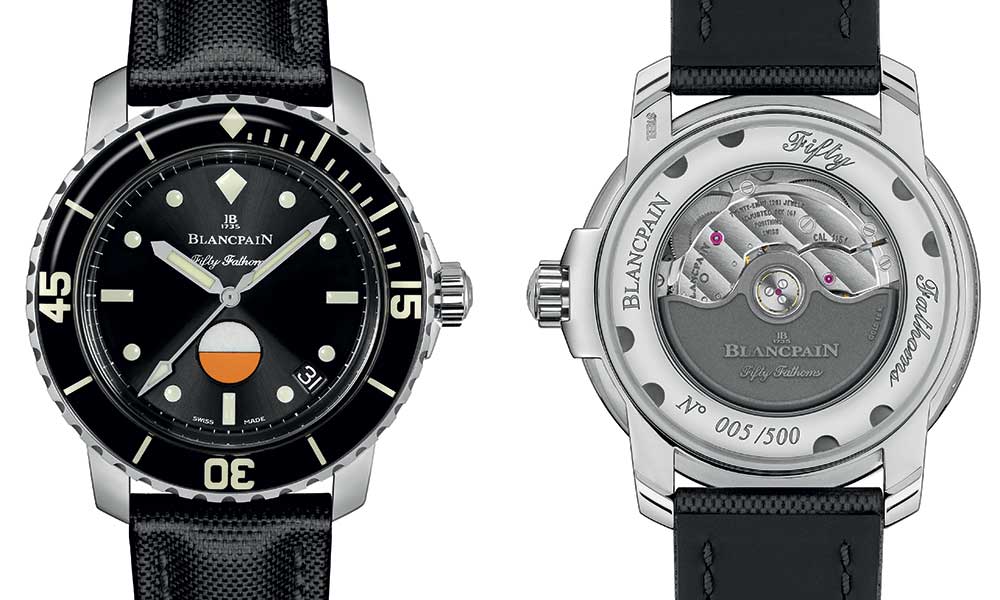 While this new watch borrows features from its ancestor of 1953, especially the water-rightness indicator, it also benefits from the very latest technology. Beginning with the black, notched, unidirectional revolving bezel on the case, equipped with a scratch-proof sapphire glass ring and luminous markers – essential for keeping track of time when diving. The steel case on the Tribute to Fifty Fathoms MIL-SPEC model is 40mm in diameter and waterproof down to 300m. The case back is sealed with a sapphire window revealing a solid gold rotor adorned with a platinum alloy for the calibre 1151. The automatic mechanical movement made by Blancpain includes a silicon spiral – a light and rust-resistant material that is impervious to magnetic fields – plus a double barrel providing 96 hours (or four days) of power reserve.

The dial on the Tribute to Fifty Fathoms MIL-SPEC is adorned in brushed black with rays extending to the chapter ring from the centre, where the luminous hour, minute and second hands are set. The hour markers are made up of three different geometric shapes (rectangular, round and triangular) following the aesthetic codes of the 1953 version. At the bottom of the dial, at 6 o’clock, is the water-tightness indicator with a disc split in two crosswise and showing a white lower half-moon and an orange upper half-moon. The date, meanwhile, is shown discreetly in an open window at 4.30, white against a black background.