24 HOURS IN THE LIFE OF A PEACOCK

Enhanced by a night-time backdrop or a light-filled setting, a peacock majestically deploys its blue and bejewelled train of feathers, displaying a range of art forms on its graceful body.

The peacock is a majestic bird with a range of symbolic attributes – immortality, peace, renewal and justice, among others – and has been celebrated the world over since Antiquity. We find it fascinating when it opens its shimmering plumage like a fan with blue-green tints. Bvlgari has taken inspiration from the bird’s beauty for the dial on a sophisticated watch for women: Diva’s Dream. Because it is true, with its colours and an attitude sometimes seen as vain, the peacock could well be likened to a diva. 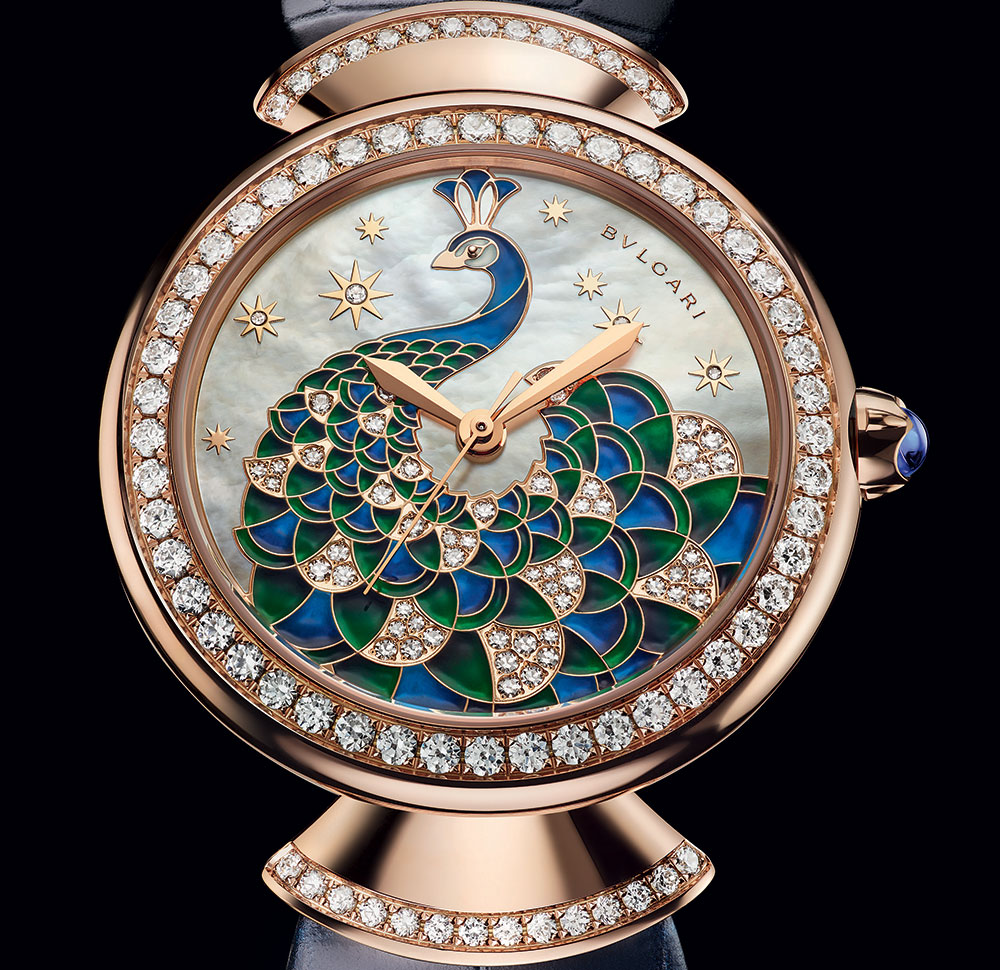 The brand from Rome is highlighting the famous bird on two versions of Diva’s Dream, one representing a starry night and the other filled with daylight. The watch cases are made of white or red gold, are 37mm wide and each illuminated with a line of diamonds on the chapter ring and the cone-shaped lugs. The crown is decorated with a sapphire. The watch cases contain the calibre BVL191, an automatic movement made by Bvlgari and powering the traditional time functions (hours, minutes and seconds) while providing 42 hours of power reserve.

The dial on the “nocturnal” version of the Diva’s Dream is made of white gold, decorated with an aventurine disc, a navy-blue glass, and sparkling with tiny silver paillons, like the heavenly vault. Eight small stars, with five set with a diamond, help light up this night sky. Prominently featured on the dial is a peacock made using counter-relief engraving and decorating the dial with its plumage. Some of the cone-shaped cells, recalling the watch case lugs, are decorated with diamonds, while others are filled with shades of blue paint, from turquoise to emerald via navy blue. The peacock’s eye is embodied by a small silvery pearl, watching over the two sword-shaped hour and minute hands at the centre, along with a second hand.

For the “daytime” version of this model by Bvlgari, the layout is the same. Only the decor changes. Instead of an aventurine disc, the peacock is depicted in front of an ivory mother-of-pearl background. The iridescent reflections are highlighted by the warmth of the golden stars surrounding the bird’s neck and head.