After Ibiza, the Nyon-based watchmaker chose Mykonos as its next destination. Inspired by the azure blue waters of the Aegean Sea, it has created a limited edition dedicated to the most famous island of the Cyclades with both a party atmosphere and a peaceful side to it too.

For the eighth consecutive time since 2012, Hublot is setting sail for Mykonos. Following its summer voyage which recently led it to Ibiza, the watchmaker has now chosen to embark on the famous Cycladic island. Although it is known for its nightlife, this Greek enclave, situated less than 120 miles from Piraeus, the principal port of Athens, still has a uniquely gentle way of life. Surrounded by the turquoise waters of the Aegean Sea and symbolized by the profile of its windmills, Mykonos is brimming with beautiful beaches that gleam in the sunlight. It is this peaceful spirit that the watch brand wanted to reproduce at the heart of a new limited-edition Classic Fusion Chronograph Mykonos. 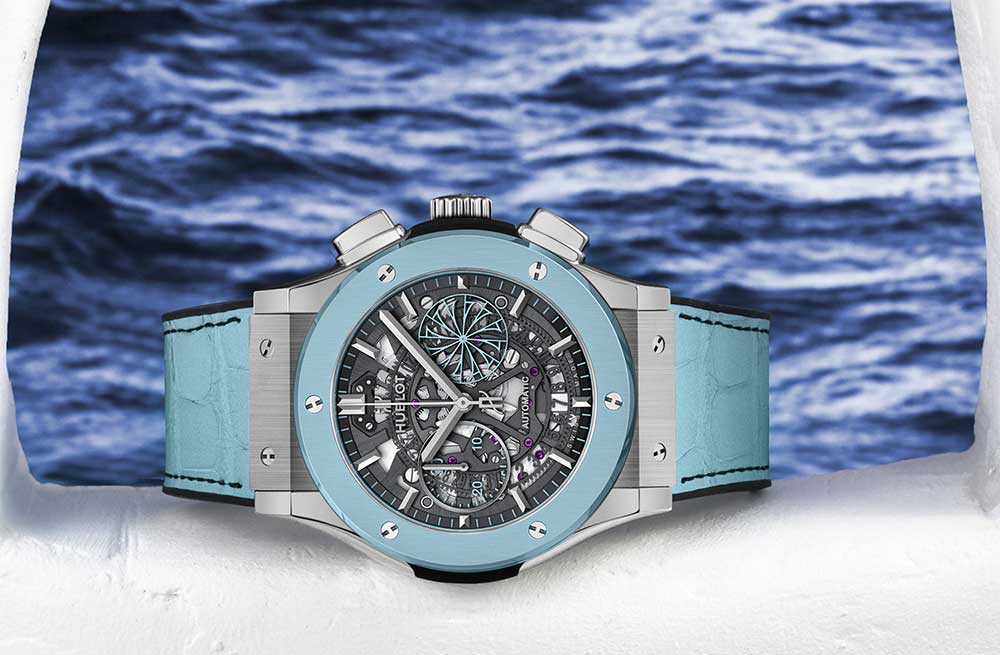 The reverse is numbered and engraved with the words “Mykonos edition”, while the front reveals all the secret cogs which power the watch. The ruthenium or gold plating of the index markers, central hour and minute hands and chronograph seconds as well as the contour of the minute counter at 9 o’clock makes them seem as though they are hovering in midair. The small seconds dial at 3 o’clock is decorated with the blue-lacquered silhouette of the sails of the famous windmills.