50 years after the Ford GT’s win at the 24 Hours of Le Mans, in the colours of the giant oil company, TAG Heuer has unveiled a special edition of the chronograph, the Formula 1 Gulf.

Especially since the Carrera chronograph was launched by Jack Heuer in 1963, TAG Heuer has been closely linked to car racing. The love of sport and speed can be seen in Formula 1, a collection first released in 1986, and continuing today with the Formula 1 Gulf Special Edition. Half a century after the Ford GT’s victory at the 24 hours of Le Mans, in the colours of Gulf Oil, the international oil company founded in 1901 and very active in automobile sponsorship, the watchmakers have released a robust, reliable and accurate quartz chronograph in homage to the historic event on 29 September 1968. 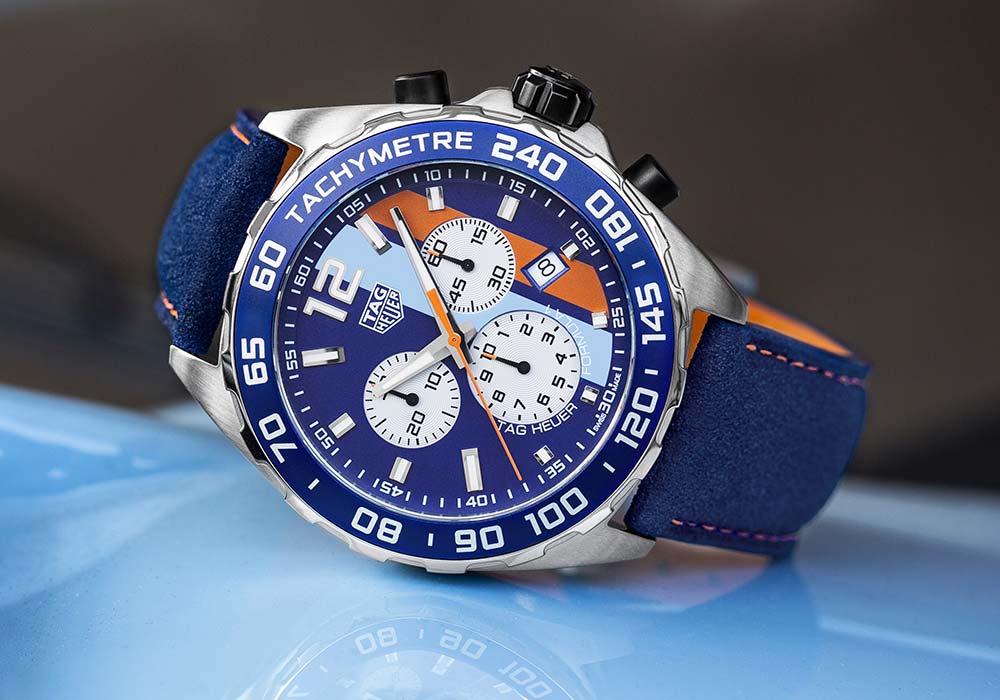 The Formula 1 Gulf Special Edition model has an undeniable visual attraction. Even someone who is not a car-racing fanatic will instantly recognise the sponsor’s signature, the two sky blue and orange stripes running down the left-hand side of the dark blue dial. The oceanic tone is repeated on the notched aluminium bezel with the tachymeter – an indispensable element during a race. Another vital tool at sports events, and especially in car racing, is the chronograph split-time measurement. This feature is expressed by an orange lacquer-coated second hand in the centre. Two totalisers, with silvered and azured discs for easy reading, round off the time-measurement tools with the tenths of a second at 6 o’clock and the minutes at 9 o’clock. A third counter at 3 o’clock displays the running seconds, while the “traditional” hours and minutes are counted down by two central dauphine-style hands. The date is shown in a window at 4 o’clock.

To wear this watch with a 43mm-wide steel case, TAG Heuer has supplied a blue leather strap matching the dial and the bezel, with a finely grained appearance reminiscent of the race tarmac.