“The diamond king” has taken inspiration from nature with precious raindrops falling against a night-time setting while retaining all of the watchmaker-jewellers’ aesthetic signatures, such as the deep blue colour and emerald-cut diamonds.

The first version of this watch (unveiled in 2014) featured a 39mm-wide case and was driven by a quartz movement. Today, three years later, Harry Winston has reworked the Midnight Diamond Drops, reducing the size of the case to make it the smallest watch in the Midnight collection, and giving it an automatic calibre. 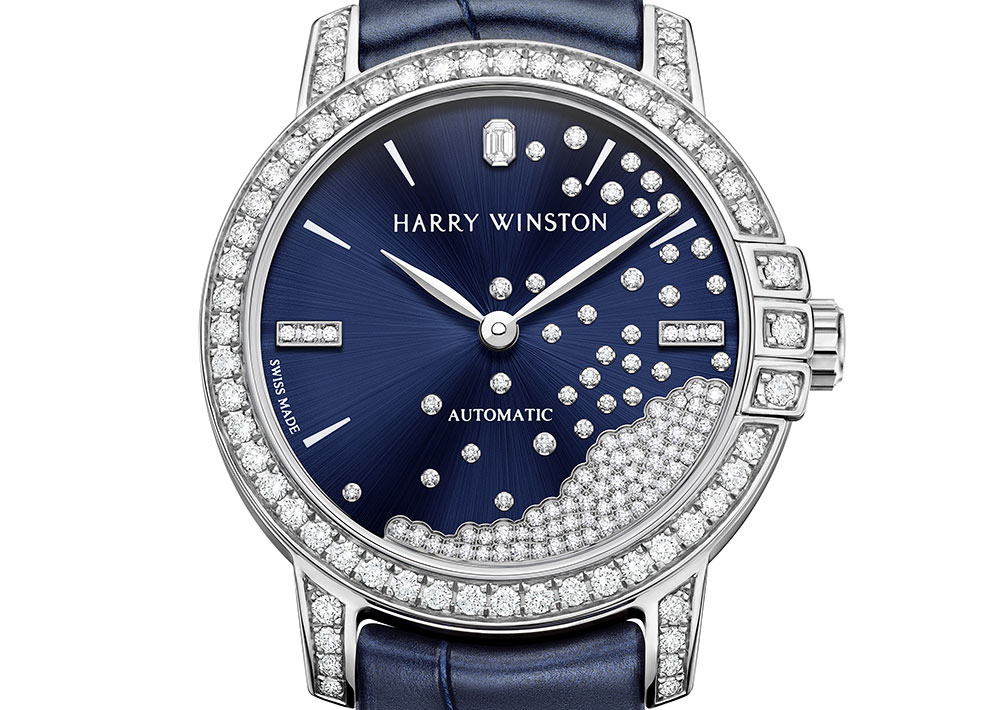 With its white gold setting measuring 29mm in diameter, the new Midnight Diamond Drops is indeed a small jewel of a watch, both slim and elegant. The case is covered with 64 brilliant-cut diamonds, particularly on the bezel, on the famous triple signature at 6 o’clock and on the lugs linking it to the strap. It houses the calibre HW2010, an automatic movement beating at 21 600 vibrations an hour (3Hz) and providing a power reserve of 40 hours. This mechanism is partially visible through a case back equipped with a sapphire glass window.

Criss-crossed by gentle sun beams, the dial has a deep blue tint inspired by the Hope diamond, an exceptionally beautiful jewel bought by Harry Winston in 1949. The hour rim plays on shapes, with five metallic triangles, two rectangles set with three brilliant-cut diamonds each and – like a star lighting up the sky – a magnificent emerald-cut diamond at 12 o’clock. Naturally, the stars of this jewel-rich show are the diamond raindrops that seem to fall from the top of the dial to gather at the base, like drops of water poured from the sky to form a sparkling pool. 96 brilliant-cut diamonds were used to make this shower of gems. In the centre, two slim hands, like two silvery leaves, display the hours and minutes.

The nocturnal tone on the dial of the Midnight Diamond Drops extends to the blue mother-of-pearl alligator leather strap with a white gold ardillon buckle.