RAYS OF STEEL AND RAYS OF SILVER

Two of the typical hallmarks of Jaquet Droz watches are at the heart of this Grande Seconde Quantième duo. First of all, although the dials are neither “Grand Feu” enamel nor mineral, as they generally are in the watchmaking collections by the Chaux-de-Fonds brand, they still have all the purity that gives them their elegance. No excess flourishes or sense of narrowness – just space. A great deal of space. Secondly – and this is one of the symbolic strengths of the Swiss watchmaker – a large 8 formed by the fusion of two counters extends its loops over the dial with masterful sophistication.

This Grande Seconde Quantième Satin-Brushed duo, introduced at BaselWorld 2017, was a success from the very opening of the trade fair. All the aesthetic codes and mechanical power of Jaquet Droz are on display in these two watches with prices under the threshold of 10 000 Swiss francs. Another attractive element for the Grande Seconde Quantième Satin-Brushed that will widen its clientele even more. 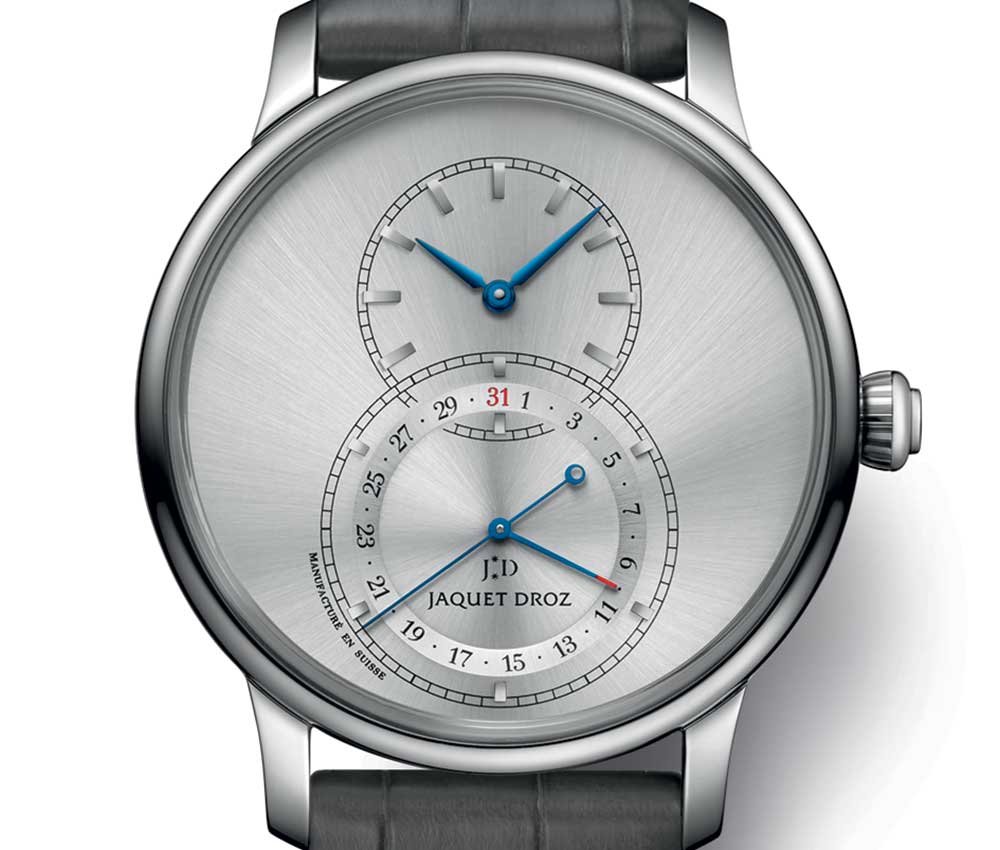 In fact, this model model has two faces – one silver grey and the other steel grey – and two diameters – 39 and 43mm. Theses choices will also help attract more customers and fans of Jaquet Droz.

Each dial is adorned with a satin-brushed finish and fine sunburst engravings, with rays beginning not at the heart of the dial, as is the case in most watches, but near 6 o’clock, where the long second hand and the varnish-tipped date hand are centred. These two displays are, in fact, grouped in a single counter, with lowered edges to house the date, encircled by the second markers. At the 31st day of the month (shown in red), this sub-dial interlocks with the hour and minute counter to form the magic number 8.

Ringed by white markers against a black background, the hour rim, made up of applied indices, is the setting for a couple of silver or blue lancine-style hands, displaying the hours and the minutes.

At the heart of the steel case, measuring 39 or 43mm in diameter, is housed the JD2660Q2.P calibre. This automatic mechanical movement has a double barrel, and provides 68 hours of power reserve, while driving the hours and minutes (offset at 12 o’clock on the dial) and the seconds and the date (brought together at 6 o’clock).