The watchmaking firm from La Chaux-de-Fonds has inscribed its famous lucky number 8 at the centre of a white mother-of-pearl disc enhanced with gold and diamonds, with a tourbillon taking centre stage.

“In art, as elsewhere, only purity is important to me,” wrote André Gide (1869-1951), the French writer born almost a century after the death of the founder of Jaquet Droz, Pierre Jaquet-Droz (1721-1790). And the noun “purity”, describing something faultless and untouched by time is no doubt what characterises the watches designed at the workshops in La Chaux-de-Fonds, and especially the Grande Seconde model. For the next BaselWorld, Jaquet Droz has adorned this essential timepiece with new aesthetic and mechanical finery. 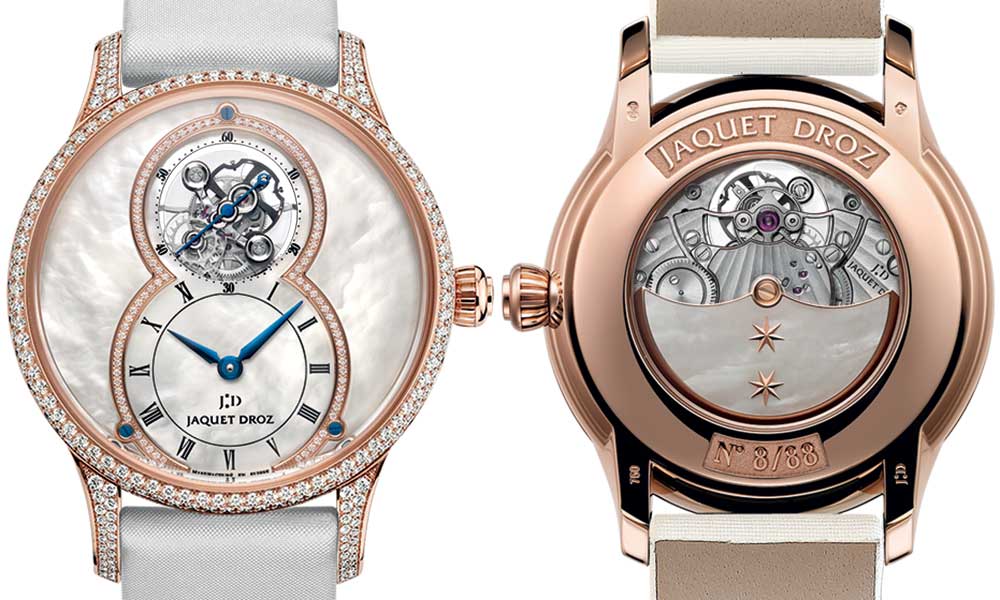 Called the Grande Seconde Tourbillon Mother-of-Pearl, the watch is bedecked with white mother-of-pearl, red gold and diamonds. The watch face is made from an iridescent disc and features several levels, offering a deep visual impression. At the heart of this opalescent surface is a red gold structure set with 90 diamonds and three blue screws drawing the outline of a majestic “8” on the watch face. Circled with precious stones and offset at 6 o’clock are the hours and minutes, represented by two blue lancine-style hands moving across an hour rim with black Roman numerals. The upper loop of the 8 is formed by a glass display under which the tourbillon can be seen. A small, blue second hand displays the seconds on a scale with Arabic numerals and dots.

The red gold case measures 39mm in diameter and is highlighted by a double ring of diamonds (260 stones with a total of 1.41 carats) running along the bezel and the outer side of the lugs. This setting houses an automatic mechanism, the 25JD.Si calibre. “Si” is for silicon, used to make the spikes of the anchor and the spiral – providing a big power reserve of seven days. Through the sapphire background adorning the back of the case, you can see the dance of the red gold mechanism, inlaid with white mother-of-pearl.

A white satin strap rounded off by a gold buckle set with diamonds completes this new Grande Seconde Tourbillon Mother-of-Pearl.