A PRINCESS DRESSED IN PINK

As ever, the watchmaker from La Chaux-de-Fonds elegantly blends some of the natural beauties provided by the Earth: rare minerals with soft colours, a warm-toned metal and sparkling precious stones

There are several categories of precious stones: the ones whose value is set by their price on the specialised markets; the ones whose rarity earns them the spotlight; and then the ones whose aesthetic appearance is quite simply… breathtaking! Astorite belongs to the last category. It is certainly not a well-known mineral, but it stands out because of its impressive colour, half way between candy pink and Persian pink, and flecked with silver grey or anthracite grey spangles. So it was natural for the master of stone mineral dials, Jaquet Droz, to use astorite on the face of its Petite Heure Minute Astorite model, limited to 28 pieces. 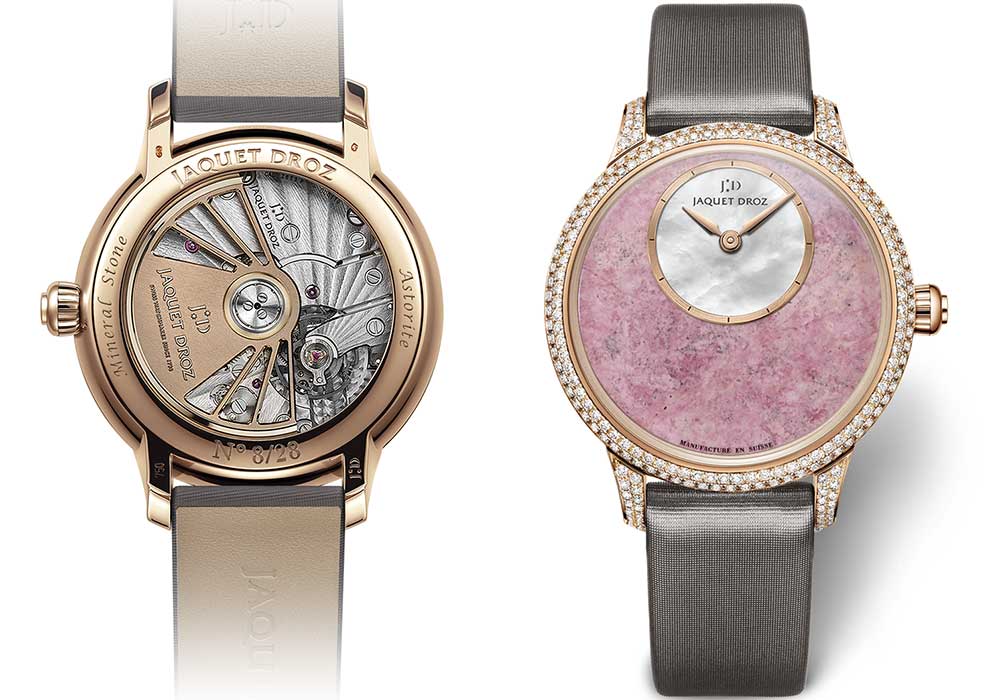 Astorite is named after John Jacob Astor IV (1864-1912), a very rich American businessman and army officer of German origin, who died during the dramatic sinking of the Titanic. An investor in valuable real estate, John Jacob Astor IV also owned a mine in San Juan, Colorado, where astorite was mined. On the death of the American magnate, in 1912, the entrance to the mine was blocked by dynamiting, but was reopened almost a century later, in 2001.

The Petite Heure Minute Astorite by Jaquet Droz has a face featuring two colours and two materials. There is a pink disc made from a single piece of astorite, cut and polished by hand, on which a second, smaller disc is placed, made of white mother-of-pearl, and bevelled with a pink gold ring. The white disc contains a set of golden, lancine-style hands showing the hours and minutes.

This mineral ying yang is adorned by a double ring of diamonds (232 stones with a total of 1.23 carats) running along the bezel and the outer side of the pink gold lugs. The case measures 35mm in diameter and houses the automatic JD2653.P calibre. This movement made by Jaquet Droz, containing a double barrel, provides a power reserve of up to 68 hours.

The Petite Heure Minute Astorite model is worn with a grey satin strap with a gold pin buckle.