SPEED IN THE VEINS

Almost 50 years after the launch of the Monaco model, TAG Heuer has released a new version dressed in the colours of Gulf Oil International after a new partnership signed with the giant oil company.

While the watchmaking landscape was awash with round wrist watches, Heuer overturned the aesthetic codes of the times on 3 March 1969, almost 50 years ago, with an automatic chronograph housed in a square case. Christened Monaco, in honour of the Grand Prix taking place in the principality, the timepiece with straight angles had a blue dial protected by a layer of curved plexiglass and a crown on the left-hand side. Production of the Monaco model came to an end in the mid-1970s, before being relaunched in 1998 and 2002. 49 years later, in 2018, and once again in March, TAG Heuer has introduced a new model with the dial colours borrowed from Gulf Oil, the brand’s new partner. The watchmakers from La Chaux-de-Fonds and the oil company that is closely linked to motor racing have sealed a collaboration that bears fruit today with the creation of the Monaco Special Edition Gulf 2018. 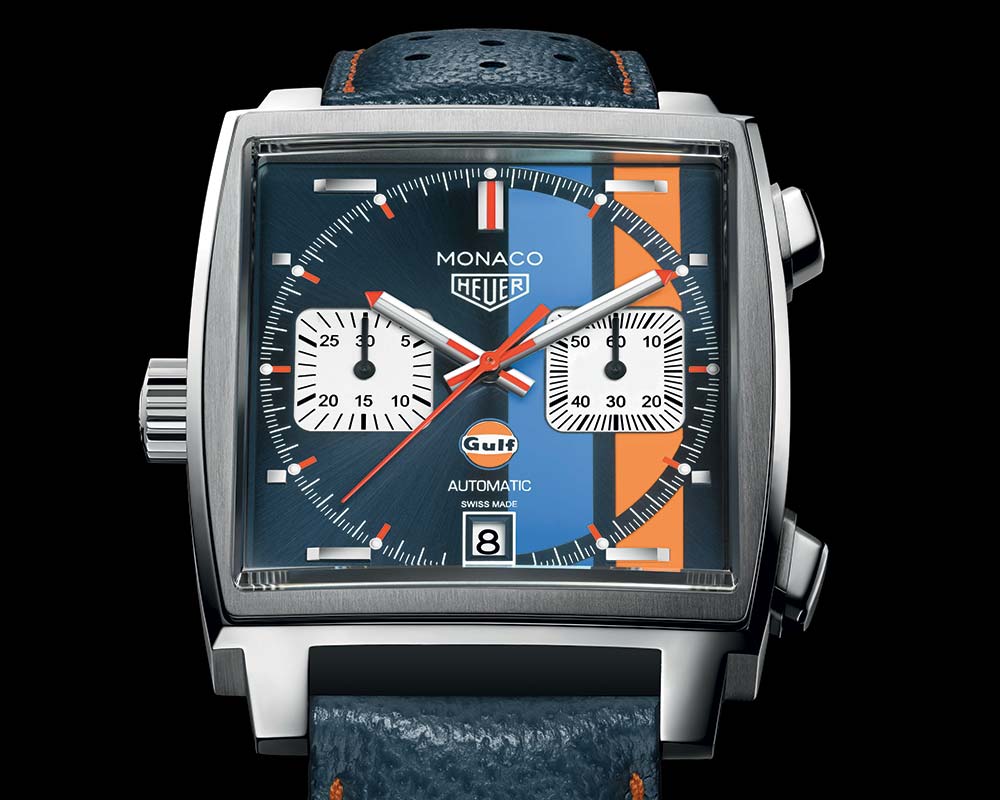 The case of this new watch is made of steel and measures 39x39mm; the crown is at 9 o’clock and the long pushbuttons used to start, stop and reset the chronograph take up their usual position on the right-hand side. This metal setting contains the Calibre 11, a self-winding mechanical movement running at a frequency of 4Hz (28,800 vibrations an hour) and providing a power reserve of 40 hours.

The dial is coated in a layer of delicately sunburst petrol-blue PVD, with two stripes on the right-hand side, one light blue and the other orange, inspired by the colours of Gulf Oil; the company logo can also be seen at 6 o’clock, just above the date counter. Two counters with rounded angles and a white background stand out in this colourful decor: the running seconds (at 3 o’clock) and the chronograph minute totaliser (at 9 o’clock). The seconds, meanwhile, are at the centre, as are the hour and minute hands.