True to the aesthetic codes of the Speedmaster collection, this new watch by Omega concentrates spirit of performance and diamond brightness.

For the beginning of the year, a few weeks from Baselworld 2017, Omega has released a preview version of two Speedmaster watches, with this being the second. Unlike the Speedmaster Automatic model, embodying speed, this one is gentler – while keeping to its role as a chronometer, as befits the collection to which it belongs! 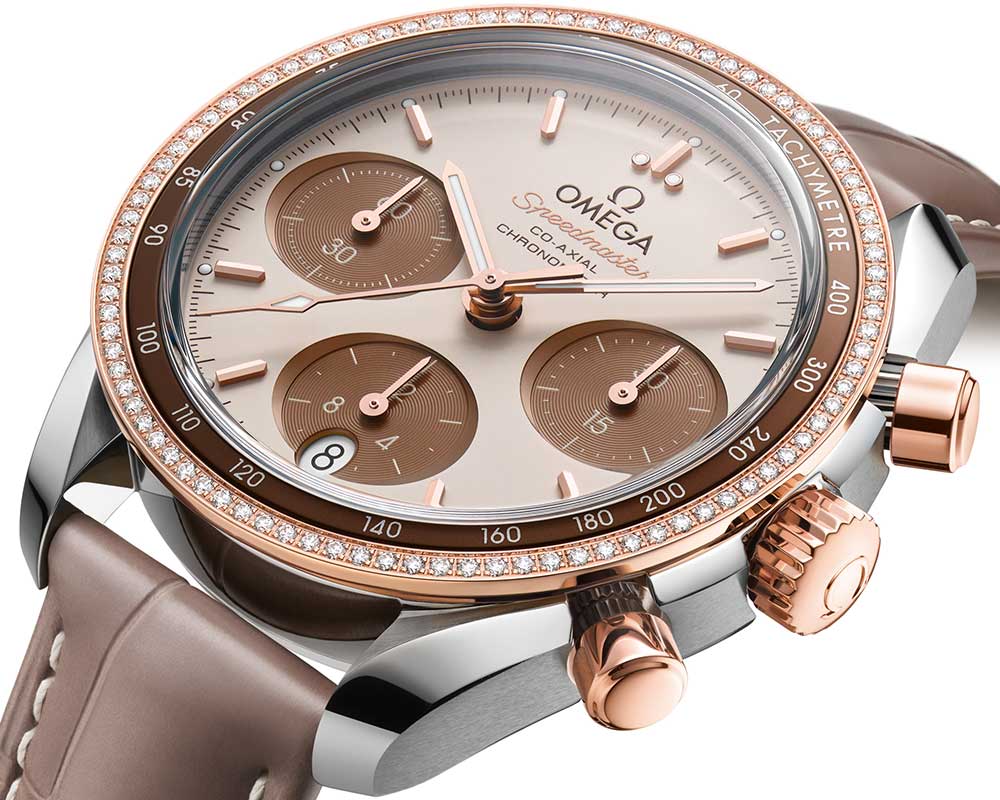 This new Speedmaster 38mm, affectionately nicknamed the “Cappuccino“ because of its soft colours, is driven by the Omega 3330 calibre. This self-winding movement, certified as a chronometer by the COSC and fitted with a Co-Axial escapement and a silicon spiral, drives the hour, calendar and chronograph functions while providing over 50 hours of power reserve. It is housed in a steel case that is – as its name implies –38mm in diameter, and features a medallion engraved with the Speedmaster sea horse on the back. A dual-material bezel tops the metal setting: an outer ring made of SednaTM gold paved with diamonds encircles an inner ring of hazelnut aluminium, where a white tachymeter scale is set. All in all, this is the perfect balance between the spirit of performance and the dazzle of precious stones.

In terms of beauty, even the finest latte art made by a seasoned barista would pale in comparison beside the dial of the Speedmaster 38mm! Indeed, the creamy ivory disc hosts three hollow, oval and azure counters, as well as an hour rim made of markers gilded with SednaTM gold and including a fine, black minute track. A set of stick-shaped hands, also made of SednaTM gold, display the hours and minutes, while the seconds tick by independently in a counter at 9 o’clock. The chronograph functions, meanwhile, are shared between a display in the centre for the seconds, a first counter at 3 o’clock for the minutes, and a second counter at 6 o’clock for the hours. The hour counter includes an opening in the shape of an oval window showing the date against a white background.