Bring back to life flagship models from the past – this was partly the mission of the watchmaker Oris in presenting two re-releases of older watches, one dating from the 1970s.

Like fashion (but in a less striking way), watchmaking goes through cycles. What is fashionable today will no longer be tomorrow, but will return to centre stage the day after that, if we summarise these cycles in just a few words. Typically, the XXL-sized, 45mm watch cases that were all the rage in the early 2000s have gradually given way to 40mm models, which are much easier to wear and above all unisex (yes, indeed!). Perhaps they’ll be back in fashion in 10, 20 or 30 years… Who knows? The same goes for models such as the Chronoris, created by Oris in 1970, and which has been reissued in 2017, almost 50 years later.

The original watch was the first chronograph designed by the brand from Hölstein, in the canton of Basel-Landschaft, in the north of Switzerland, and is also the watch that set up the first link – that is now very strong – between Oris and car racing. The new Chronoris Date not only takes up the highly graphic dial of its ancestor, but also the shape of its case and the strap with its many metal links. 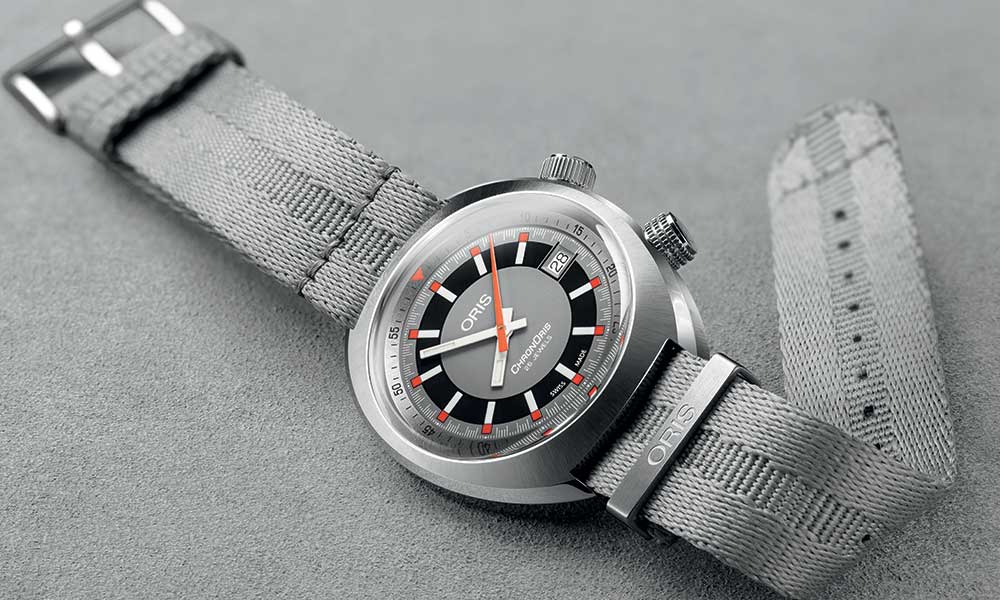 With a round silhouette that almost looks oval when the lugs are added, the Chronoris Date case is made of steel and measures 39mm in diameter. Along with a screwed case back, it is equipped with two crowns, one at 2 o’clock and the other at 4 o’clock. The first is used to set the time and wind the watch up by hand, while the second serves to adjust the internal revolving bezel. The bezel, which replaces the chapter ring, is graded on a scale of 60 and has a orange-red triangular marker for the chronometer function.

This touch of colour, half way between coral and blood orange, can also be seen on the central second hand and on the squares above the white hour indices on the dial. The dial features black, grey and silver concentric rings around a grey disc. The hours and minutes are displayed with two white, stick-shaped hands coated with Super-LumiNova®. With black edging, the date is shown at 3 o’clock against an easy-to-read white background.

The power behind the Chronoris Date is the calibre Oris 733, an automatic mechanical movement based on the Sellita SW 200-1. It provides a power reserve of about 38 hours.

This reissue of the 1970s Oris model is equipped either with a vintage brown strap, perfectly matching the silver colour on the steel case, black leather or rubber. The original steel strap has 15 metal links that have been modernised to make it more flexible and comfortable to wear. But with a NATO strap in light grey material, the Chronoris Date model is quite simply magnificent!