THE SKY, THE STARS AND THE TIME

This new timepiece designed by Parmigiani is an invitation to explore the stars, unveiling a face studded with gold leaf and surrounded by diamonds

It is now possible to touch the stars. Well, not physically, but if you let your imagination go to work and with your eyes fixed on the new Tonda 1950 Galaxy. As its name suggests, this timepiece by Parmigiani contains the starry vault and is dressed in precious materials such as gold and diamonds. 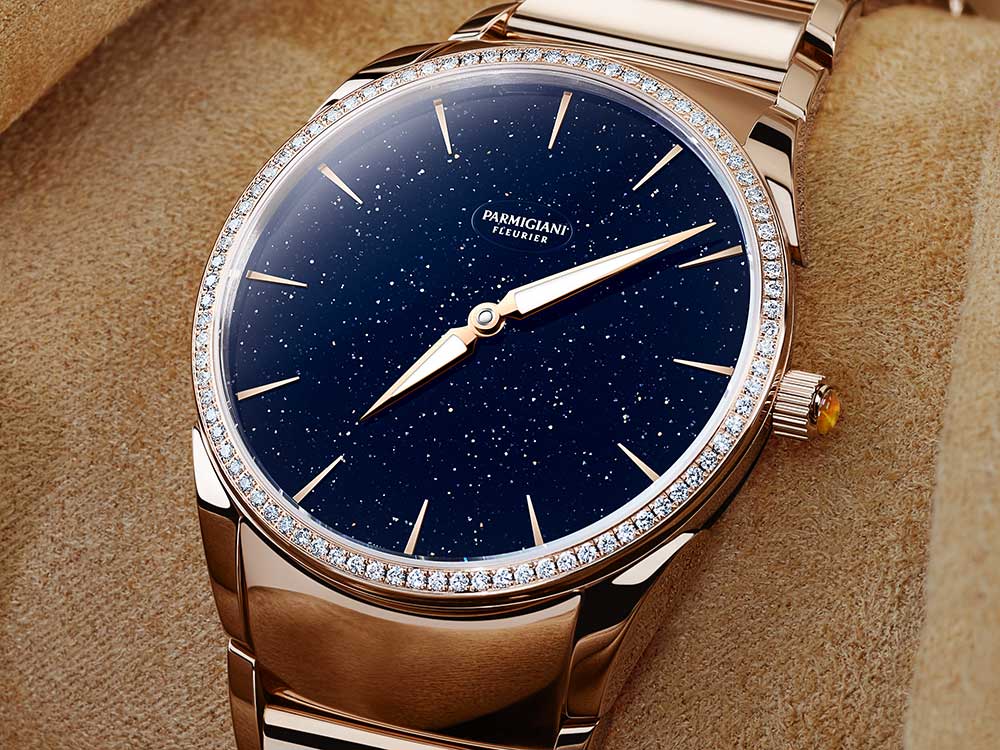 This “sky” evoking a fine summer’s night was made of aventurine, a term that is wrongly used to refer to goldstone (aventurine glass). Whereas mineral aventurine is a coloured chalcedony from the quartz family, and a work of nature, goldstone is made by man. It was discovered by accident in a glassworks in Murano in the 17th or 18th century. In a workshop on this famous island to the north of Venice in Italy, an artisan accidentally dropped copper filings in some molten glass. The dazzling result, which was later made to a formula that was kept secret for decades, was named aventurine glass or goldstone.

The dial on the special edition Tonda 1950 Galaxy features a glass disc that is tinted and covered with tiny copper fragments, on top of which a pink-gold hour rim is set. With their slender, rectangular silhouettes, the indices converge towards the centre, where two hands are placed. These luminescent hour and minute hands are made of pink gold.

This precious timepiece is attached to a link strap, and the 39mm-wide pink gold case features a bezel covered in 84 diamonds. The crystal glass back reveals the workings of the calibre PF702 made by Parmigiani and which drives the time functions.