The watchmaker from Meyrin relies on blue in his new watch collections including a timepiece that skilfully mixes rock ‘n roll allure and precious stones.

Well-known for his avant-garde watchmaking and his non-conformist spirit, Roger Dubuis seems to have understood that the “men’s or women’s watch” concept is largely old-fashioned, and so he concentrates on the “versatility” of the diameter of his new Excalibur 36. In fact, a jewelled timepiece is not necessarily destined to be worn by the fairer sex – some male clients really like diameters smaller than 40mm, and others favour bezels studded with precious stones. 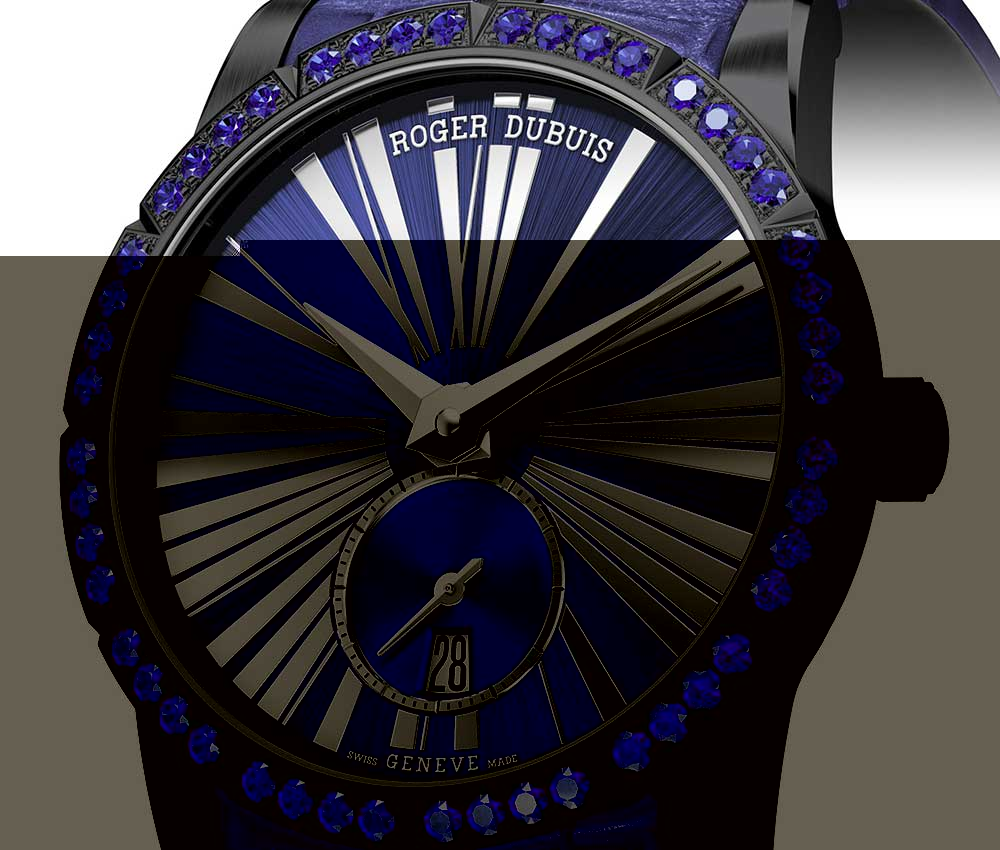 Going beyond the genderisation of products, Roger Dubuis’s Excalibur 36 model is aimed first and foremost at the lovers of character watches; at people who are looking for a timepiece with a strong identity. Its DLC-treated black titanium case is 36mm in diameter and 9.80mm thick. It is topped with an angular, notched bezel set with 48 brilliant-cut blue sapphires. Placed in rows of four stones, they reach a total of 1.5 carats. The electric blue of these gems is picked up by the dial in blue PVD with a sunburst finish where the rays converge on the centre, where dauphine-shaped hands in white gold are fixed, showing the hours and minutes. The hour marker is made up of long Roman numerals starting from the heart of the dial and spreading out towards the chapter ring. The seconds are displayed in an azure sunken counter, set off-centre at the 6 o’clock position. The lower part of this sub-dial includes a trapezoidal display that shows the date in black on a white background.

Excalibur 36 is powered by a self-winding mechanical movement, the RD830 calibre, that also provides a 48-hour power reserve when the watch is completely wound. Its oscillating weight in red gold is visible through the sapphire crystal back of the case.

Two strips of blue alligator leather completed by a folding clasp in DLC-treated titanium are there to attach this new Roger Dubuis model to the wrist.