THE PURITY OF A CLASSIC

Although during the Salon International de Haute Horlogerie (SIHH) 2018, the accent was placed above all on Montblanc’s 1848 collection, the Star Legacy is not lacking in interest – quite the contrary!

The discreet Star Legacy collection is the classic interpretation of time Montblanc-style. For the SIHH in January, a few changes were made to the family of watches’ design, but also some more structural modifications. In honour of the 160th anniversary of Minerva, the collection now includes an exceptional, limited-edition model, the Star Legacy Suspended Exo Tourbillon, and the monopusher chronograph Star Legacy Nicolas Rieussec Chronograph. But we have opted to focus on the Star Legacy Automatic Chronograph model. 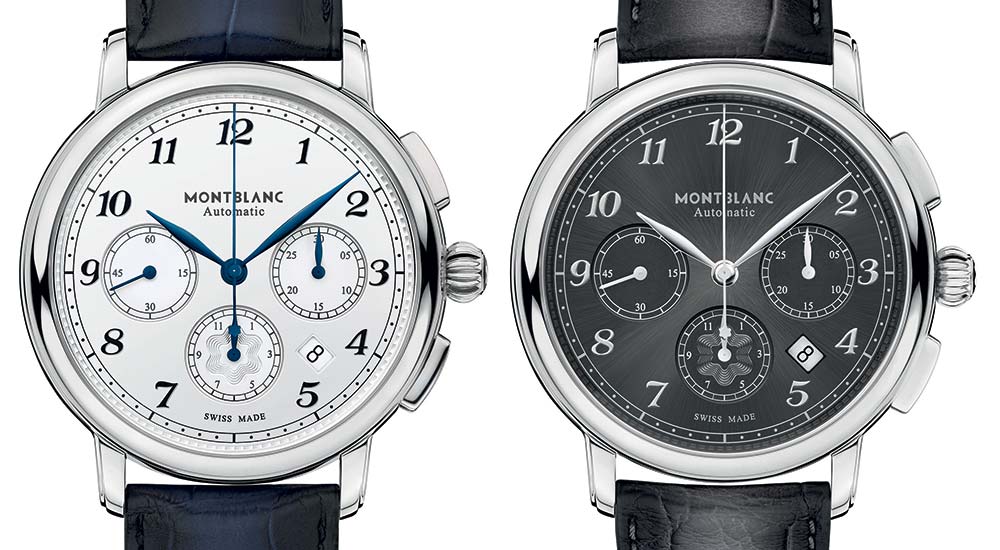 Like the other members of the family, the Star Legacy Automatic Chronograph takes some of its features from the pocket watches made by Minerva in the late 19th century and early 20th century: a 42mm-wide, round, curved pebble-shaped case, a ball-type fluted crown with an inlaid Montblanc logo, large Arabic numerals for the hours, mid-way between floral typography and Breguet style, blued leaf-shaped hands, a railroad minute track with black dots and “filet sauté” (rising and falling guilloché lines) around the edge of the dial. But the usual concentric guilloché pattern, similar to flinqué engraving techniques, forming the silhouette of the Montblanc “star” and usually found at the centre of the dial of Star Legacy watches, can be found here at the centre of the hour totaliser. The silvery white dial also features the central hours and minutes, a traditional display of time, completed by a small-second (at 9 o’clock) and a date sub-dial (at 4.30). As for the chronograph indications, triggered by two oblong monopushers on the side of the case, they are shared between the centre (seconds), 3 o’clock (minutes) and 6 o’clock (hours), and all driven by the automatic calibre MB 25.02. The calibre provides 46 hours of power reserve.

The model also comes with a slate-grey dial highlighted by Arabic numerals and silvered hands.