In the aftermath of World War I (1914-1918), people in Europe and America lived through the interwar period from 1919 until 1939 when the Second World War broke out. Despite the stock market crash in 1929, tangible tension in international business and the laborious post-war reconstruction, this transitional period was a hotbed for creativity. Different sectors were bursting with innovations, especially in personal transport with the boom of the automobile and development of aviation.

An artistic and popular movement arose in France which was heavily influenced by American culture : “ Les Années Folles ” (the Roaring Twenties). They began in 1920 and ended in 1929 after the Wall Street Crash. The decade stood out for major economic growth and a flourishing art scene. It saw the appearance of Art Deco whose geometric lines made way for curvaceous Art Nouveau then the Surrealist movement that delved into literature, poetry, sculpture, art, cinema and music such as jazz, dance (Charleston and the tango) in the music halls and dance clubs imported from the US and adapted to suit European taste. People could start really living again after a long period of international conflict.

The prosperous and productive Roaring Twenties have inspired the watch brand Tissot to design a new collection focused entirely on ladies.

The new collection has five models in rose or yellow gold fuelled by a quartz movement. The rectangular case has two straight strips that curve around the lugs. They are 34.5mm long, 20 wide and 5.3 deep and wrap around the wrist with a black or brown smooth and shiny leather strap and deployment clasp. An extra dash of style comes from the white or black ceramic cabochon adorned with a notched crown. 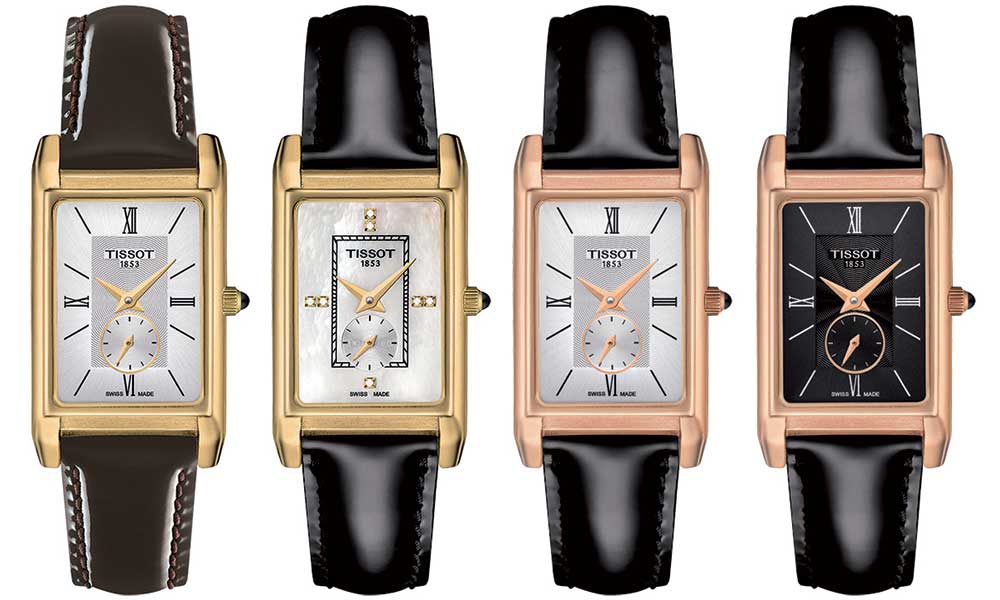 There are two dial options: classic silver or black sunburst ideal for daywear or elegant white mother-of-pearl and diamond for the evening.

The classic version’s central rectangle is decorated with wavy engine-turned engravings and slender black or white markers and Roman numerals. The blue small seconds counter is rimmed in gold.

The glamorous version has a low-key black minute track in the centre giving pride of place to four diamond markers. The subtle small seconds have a dash of daring blue on the counter.

A pair of dauphine-shape rose or yellow gold hands in the middle of the dial track the hours and minutes.

Now it’s up to you to decide when it’s time to roar.