Official partner of the Artemis Racing team, the Le Locle watchmaker proudly displays the colours of the Swedish flag on a limited edition chronograph.

A Swedish racing catamaran seems to fly over the waves, its sailing team guided by an Australian skipper and a Le Locle watchmaker renowned for its marine chronometers since 1846. Made by Ulysse Nardin, these are the three ingredients to the Diver Chronograph Artemis Racing’s recipe for success.

Formed by businessman, sailing amateur and multiple trophy winner Torbjörn Törqvist, the Swedish Artemis Racing team has been conquering the waves for ten years. A challenger in the 2017 and 35th edition of the America’s Cup in Bermuda, Artemis Racing is counting on the support of Swiss watch brand Ulysse Nardin. And their partnership is based in part on the creation of 250 limited edition timepieces that proudly bear their Swedish colours. 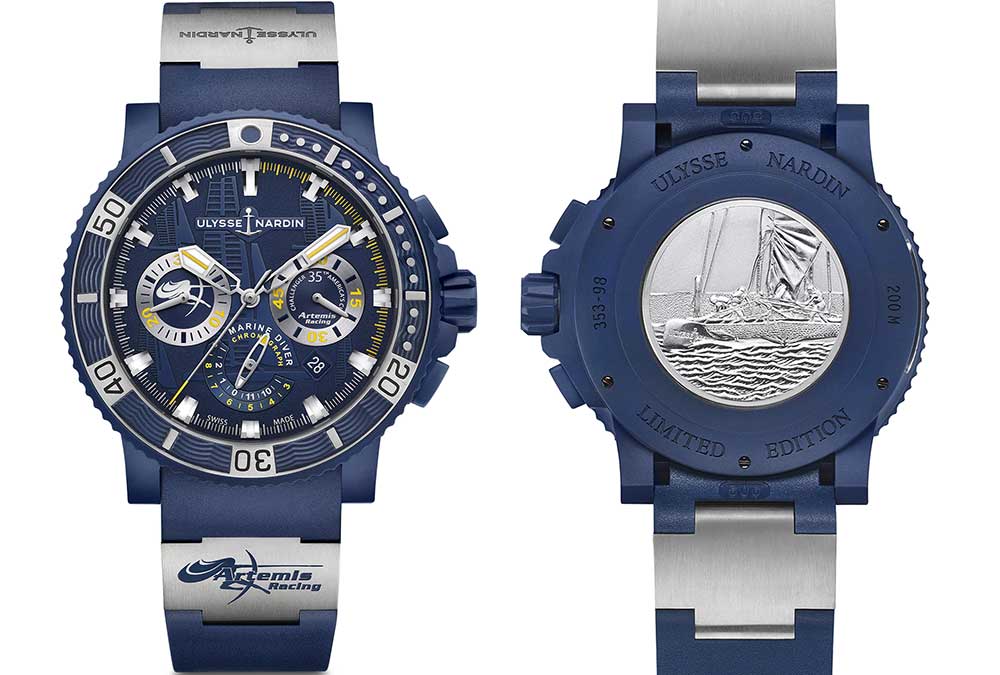 The Diver Chronograph Artemis Racing sports a 45.8mm diameter steel case covered in protective navy blue rubber to protect the screwdown crown and chronograph pushers whilst the blue rubber surrounding the notched rotating bezel on this sturdy timepiece features a wave pattern evoking an ocean swell. On board, the UN-35 automatic calibre powers a plethora of chronograph functions and supplies a 42-hour power reserve. Guaranteed waterproof to 200m in depth, the screwdown case back features a steel medallion engraved with a silhouette of the Artemis Racing catamaran.

The blue dial on this Ulysse Nardin boasts a 3D reproduction of a regatta in full sail. In the centre, two large and luminescent openwork sword hands display hours and minutes, with a small second hand at 3 o’clock showing the hour. Also in the centre, a large second hand with a yellow tip tracks seconds. Sporting the stylized Greek goddess Artemis and bow logo representing the racing team, a counter at 9 o’clock tracks minutes as well. The name of the Swedish sailing team appears prominently in the centre of the hour counter at 3 o’clock whilst the aperture at 4:30 displays a perpetual calendar.