The watchmaker based in Le Locle highlights its skills in guilloché work, enamelling and gem-setting with a trio of watches in the Jade collection.

For once, Ulysse Nardin has steered us away from the world of marine instruments, a world it has made its own for over a century and a half. Instead, the watchmaker from Le Locle, Switzerland, has taken us in a distinctly feminine direction. The destination is called Jade, and has nothing to do with the green gem, but concerns the timekeeper collection created in 2013. This year, a colourful trio of Jade “Grand Feu“ has joined the ranks of this prestigious family. 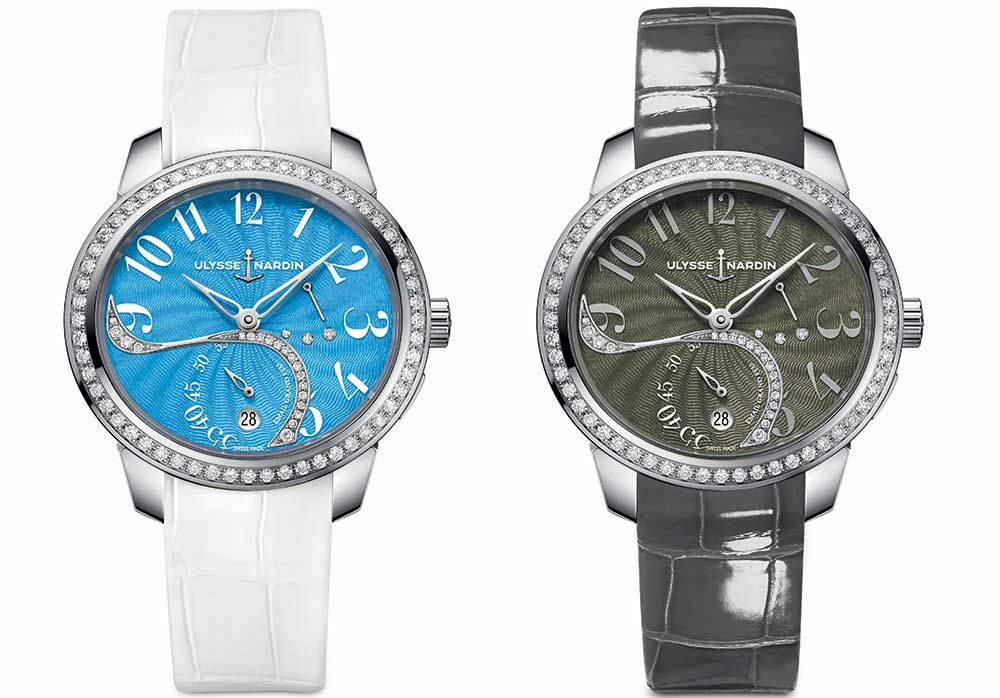 With these three new watches, Ulysse Nardin has highlighted the craftsmanship of Donzé Cadrans, which is part of the same group. Before the watch is covered with pigmented enamel, it is carefully traced with a guilloché technique, creating undulating furrows, like waves – so the world of the sea is not so far away, after all! – starting from the centre and extending to the chapter ring. The Grand Feu enamelling technique involves the metal being placed in fire several times (between 800 and 900°C) to obtain an even and shining surface of a blue turquoise, ruby red or grey green colour, depending on the version chosen. As well as the guilloché tracing and enamelling, the faces of the Jade “Grand Feu” watch are set with diamonds. A metal arabesque pattern containing 22 diamonds gracefully embraces the second counter, beginning at 9 o’clock and finishing at 6 o’clock under the date display. At the heart of the watch face arise two openwork hands showing the hours and the minutes; they move across an hour rim partly made up of large silver Arabic numerals. The second hand has similar features, and only part of the markers are displayed.

These functions are powered by the UN-310 calibre, which provides a power reserve of 48 hours. This automatic mechanism is housed in an oval case measuring 36x39mm. The case is topped by a ring of 56 diamonds. We have a little tip so you don’t damage your fingernails or chip off some nail polish when you are handling the crown. With the help of a pusher placed at 4 o’clock on the side of the watch case, you can select one of the three positions that are usually adjusted using a traditional crown. An indicator equipped with a small hand and placed at 2 o’clock shows this position, and then you just need to turn the crown, without pulling it, to wind the watch or adjust the time and the date.