Chronometer for the sea!

The new anniversary marine chronometer by Ulysee Nardin sets sail in the wake of the watches that made the brand’s name.

The Swiss manufacture Ulysse Nardin is not only known for its high-precision timepieces, based on remarkable technical innovations, but also for being deeply anchored in the sea world, since it was founded in 1846. To fittingly celebrate nine years of a partnership with the Monaco Yacht Show, the world’s biggest yacht exhibition that brings together yacht builders and fans, Ulysse Nardin has unveiled the Marine Chronometer Annual Calendar Monaco. This timepiece unashamedly hoists the sails in the tradition of the marine chronometers that have made the name of the Le Locle-based brand. 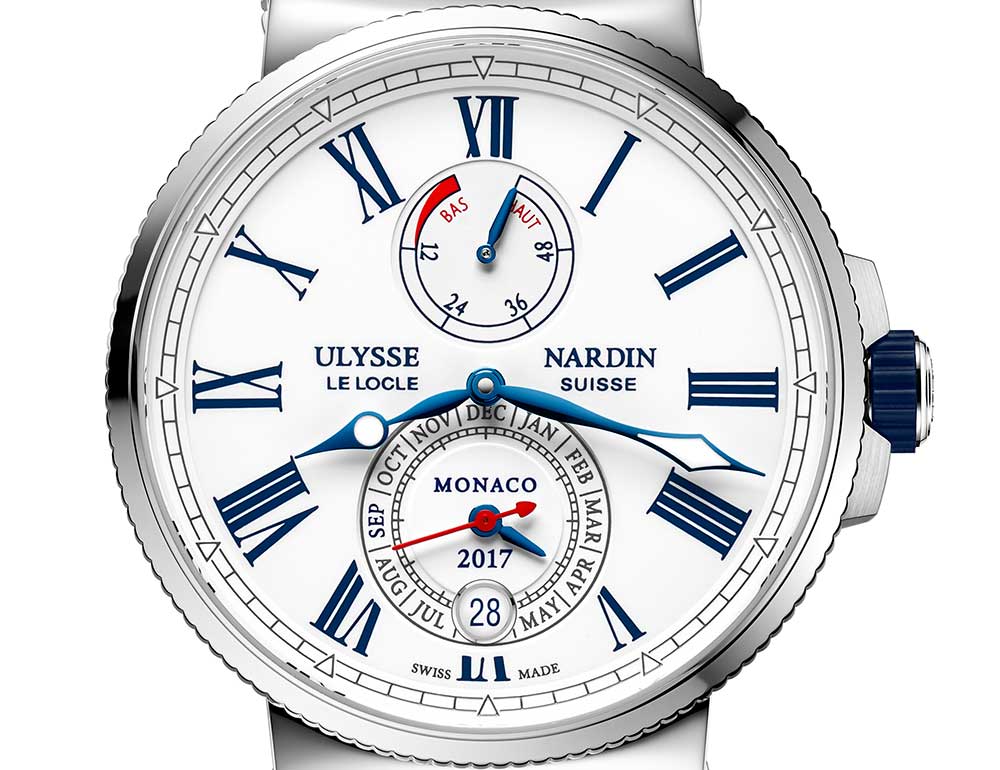 The DNA of the Marine Chronometer Annual Calendar Monaco contains all its seafaring roots. The white lacquered dial with its blue Roman numeral indices evokes the Monaco Yacht Show, a homage repeated in the inscription “Monaco 2017” on the dial, as well as the dates of the event (27, 28, 29 and 30) and the month of September, shown in blue, instead of black, on the date disc. The calibre UN-113 is at work inside the watch, with a spiral movement and a silicon escapement, entirely made at Ulysse Nardin, in the Le Locle workshop. It can be used to set the time and the calendar both forward and back.

Equipped with a 43mm stainless steel case, the Marine Chronometer Annual Calendar Monaco features a fluted bevel and a rubberised screw-down crown. As a result, it is at ease in deep underwater descents down to 100 metres. Ulysse Nardin has produced a remarkable annual calendar, together with a power reserve of 60 hours. Easy to use and with an undeniable aesthetic appeal, this timepiece is the exploit of the watchmaker Ludwig Oechslin, who has made simplicity his philosophy of life.