A Runabout is a motorboat which was first made in the 1920s. It’s also the name of a watch collection by Frédérique Constant which was born of a 2009 partnership with the Riva Historical Society to protect Riva boats. This year, two new limited edition Runabouts (2888 of each available) have sealed their bond. 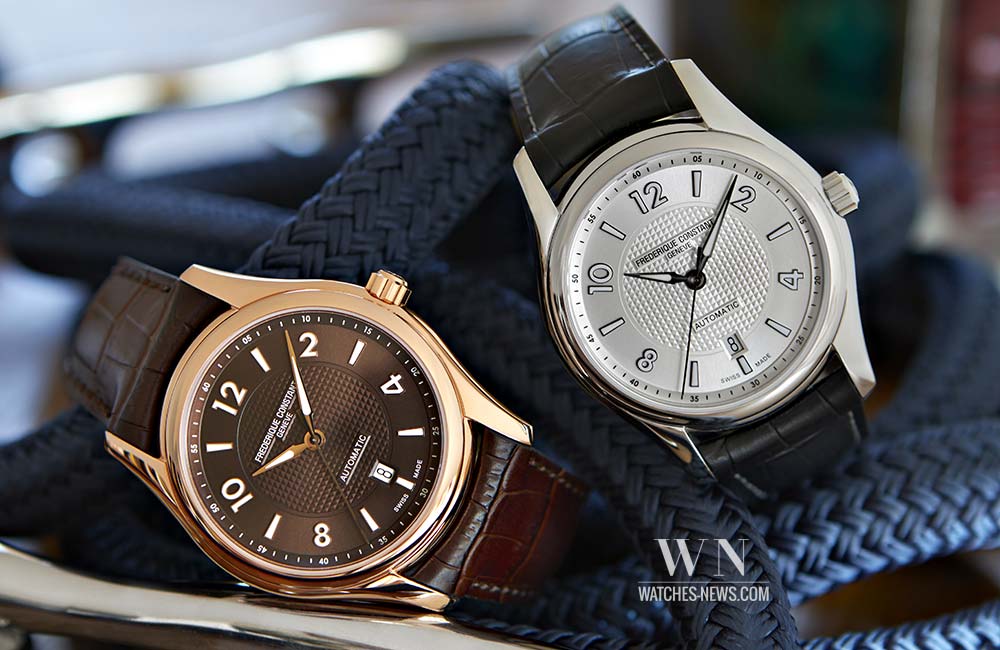 The dial comes in two colours: chocolate to warm up the rose gold model and stylish silver to match the steel model. A central engine-turned disc bears the spear-shape hands and central seconds hand in bronze or gunmetal gliding over the luminescent Arabic numerals and hour markers.

Time spins, winds and uncoils in the heart of the cobalt blue First Class Double Rotor dial, the latest model from Perrelet. As the name suggests, the steel case houses two rotors. One’s silver semi-circle sweeps over the hours and minutes on the front whilst the other performs a dance through the sapphire caseback. 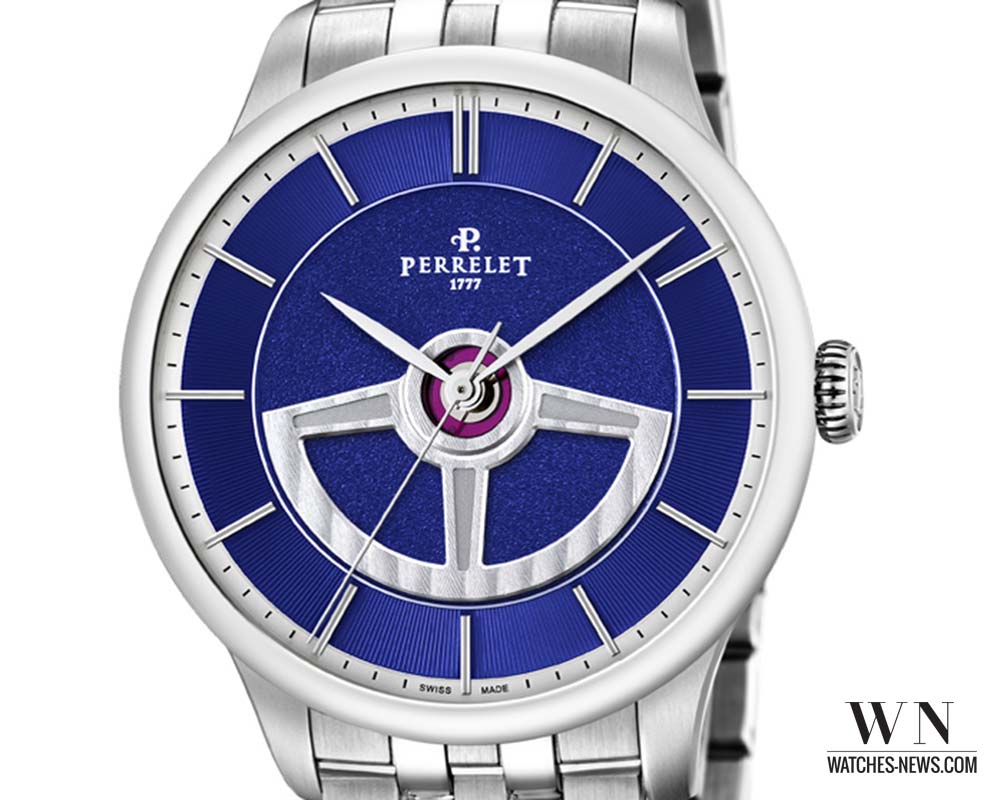 On the dial there’s a central blue grained disc for three leaf-shape hands to track the hours, minutes and seconds whilst the date appears at 6. A ring that glows with the same electric blue and vertical engine-turned engraving bears a silver hour rim whilst the minute track lies by the chapter ring.

A skeleton model is also available giving a glimpse of the self-winding mechanical calibre made by Perrelet.

Omega unveiled a new watch with a Co-Axial Master Chronometer movement in the Constellation collection at the top annual watch event that is Baselworld in 2015. This year the case has grown from 39 to 41mm and has an annual calendar: Globemaster Annual Calendar.

The case carved out of steel is topped by a fixed “pleated” bezel made of tungsten carbide, a famously hard metal. It houses the METAS-approved 8922 calibre which fuels the different functions and 55-hour power reserve. 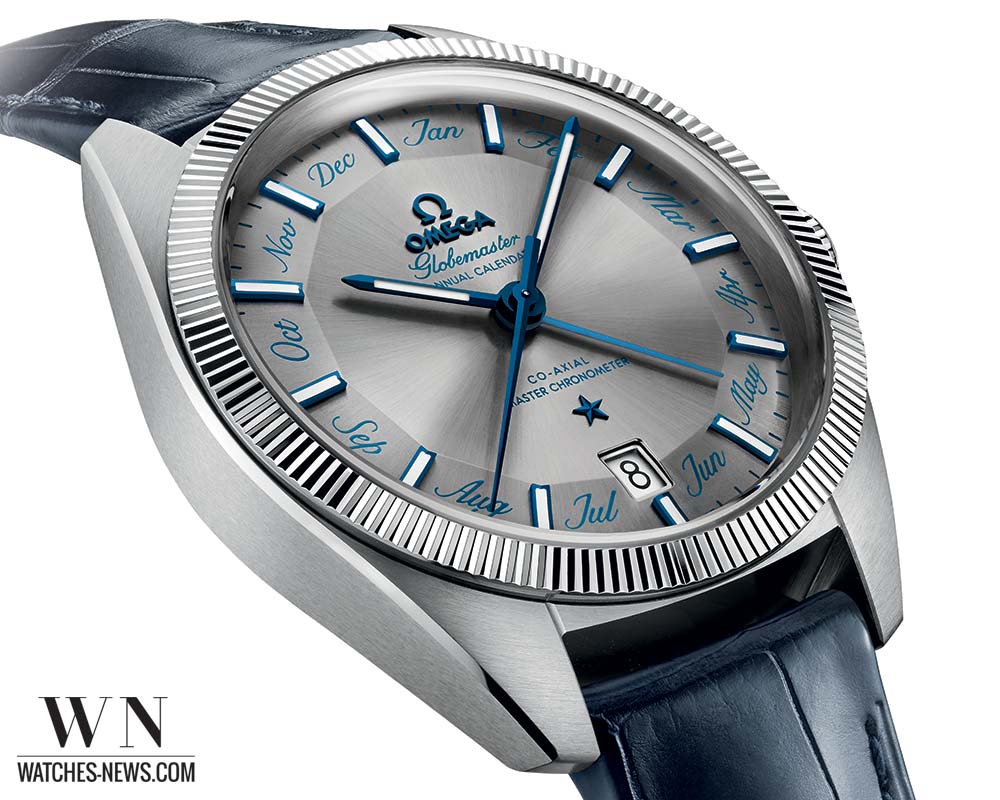 As you’d expect from the Globemaster collection, the months of the year are written in blue on the silver sunburst Pie Pan dial’s 12 facets. The months are trailed by a central hand that’s a paler blue than the other varnished hands tracking the hours, minutes and seconds.

The Bvlgari Bvlgari Carbon Gold collection is packed with nods to the past, the legendary city of Rome and the Bvlgari legacy! The date of the brand’s foundation, 1884, appears on a rose gold plate along the case from 8 to 10, Bvlgari is engraved on the fixed bezel like an ancient Roman coin and the dyed calfskin strap (brown, blue or black) is inspired by the braid that came with the ultra-limited edition of the first Bvlgari Roma in 1975. 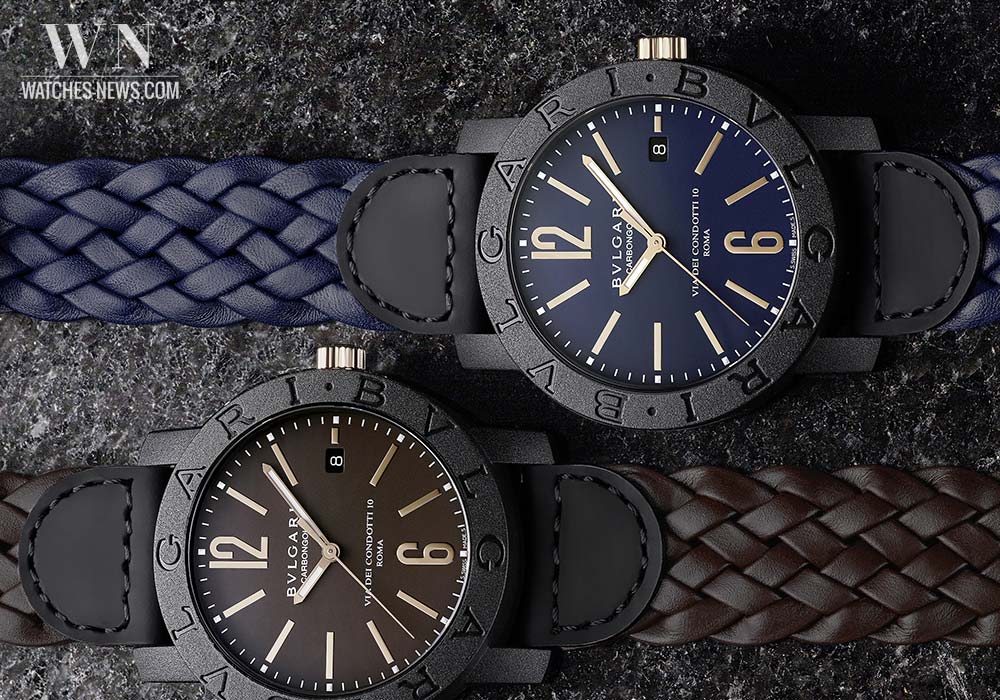 The 40mm steel case has a black carbon resin coating and rose gold crown. It houses the self-winding B77 calibre which provides a 42-hour power reserve and brings to life the hours, minutes, seconds (in the centre) and date (at 3).

French brand Bell & Ross has close ties to the military and has unveiled two navy and gold watches inspired by Naval officers’ uniforms to join the Vintage BR Aéronavale collection: a chronograph (BR126) and a three-hand model (BR123).

Both have 43mm polished steel cases; they both have a fitted steel bezel and blue aluminium ring engraved with an orange/yellow scale. Naturally, they house two different self-winding movements: the BR-CAL.301 in the chronograph and the BR-CAL.305 in the “simple” version. 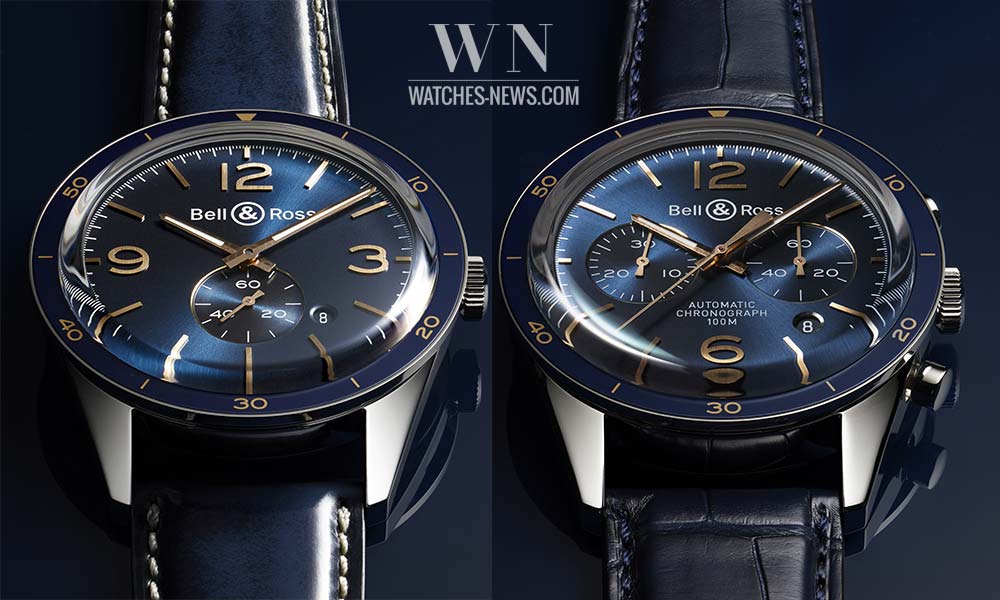 Both sunburst navy dials feature the hours in the form of gold applied baton-shape indices and Arabic numerals. The hours and minutes lie in the centre, the small seconds at 6 or 3, the date at 4.30 and the chronograph minute counter at 9.

Specialising in the two great complications that are the chronograph and Universal Time, Patek Philippe is reuniting the pair for the second time in 76 years in the Universal Time Chronograph Reference 5930. The first piece from 1940 is now part of the incredible collection of watches by the Genevan brand at the Patek Philippe Museum. 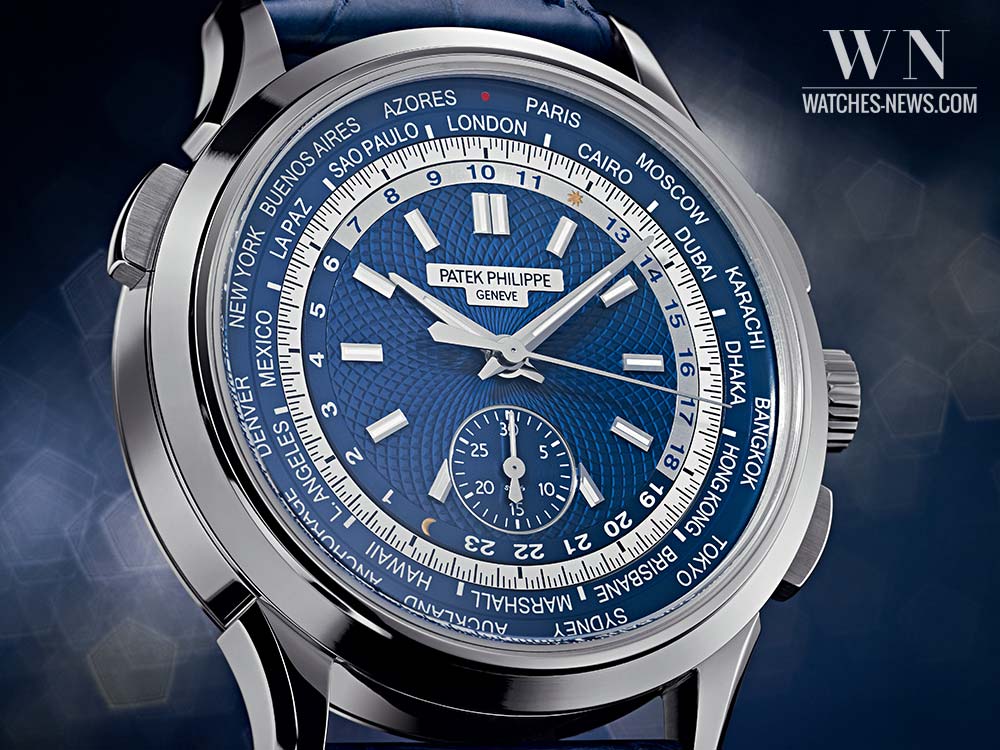 The dial is split in three from the top to the centre: blue disc engraved with 24 cities that you can select using the pusher at 10, 24-hour disc with day/night indicator (silver and blue areas) and guilloche engraved centre with hour, minute and chronograph seconds hands (minute counter at 6).

If there’s one brand out there that’s buzzing with energy, it’s Oris! After designing two new movements in 2014 and 2015, it’s going down the same road with the new manual wind 112 calibre which has a GMT function, day/night indicator and 10 day-power reserve. The Artelier collection now has a watch fitted with the movement and called Artelier Calibre 112. 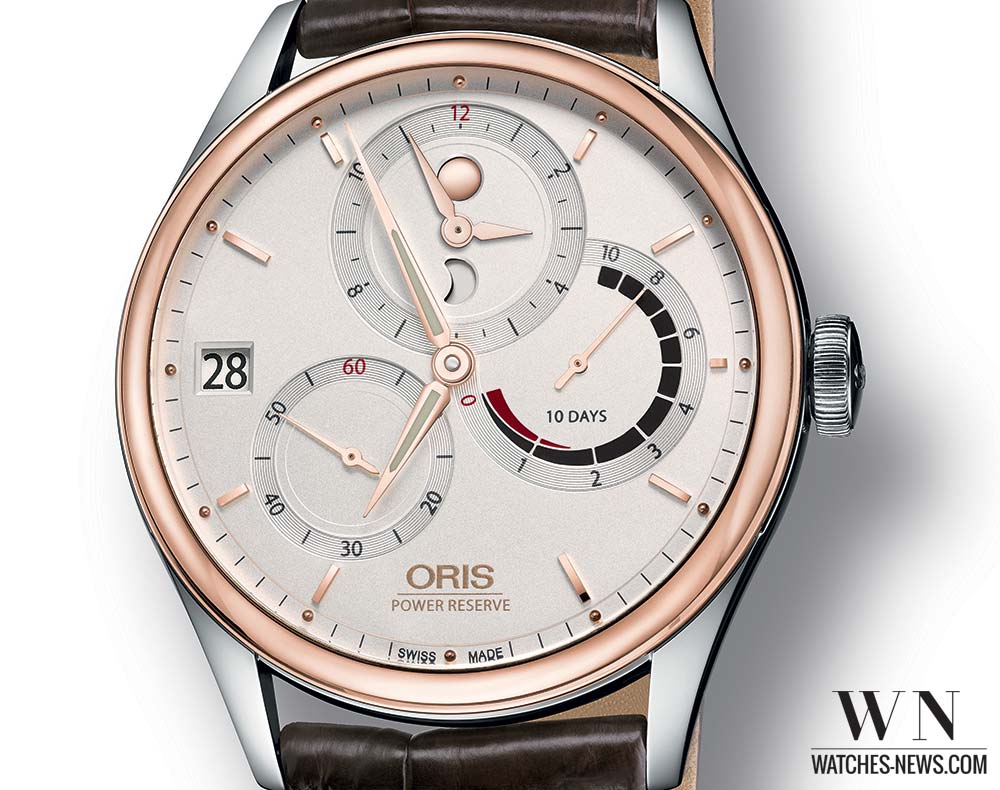 The 43mm case comes in two versions: steel or two-tone with a rose gold bezel. The famous 112 calibre is showcased by the screwdown back and sapphire glass.

Two delta-shape hands in nickel or rose gold track the hours and minutes in the centre of the silver or blue dial. The seconds lie at 7.30, the date at 9 and the power reserve indicator at 3. The star of the show is the second time zone whose hours, minutes and day/night features appear together in a counter at 12.

Harry Winston is continuing to puts its own spin on one of the top complications by unveiling the 7th chapter in its watch saga: Histoire de Tourbillon 7. This time the brand has taken its research even further to bring its clients and fans a limited edition (20 available) showcasing two bi-axial tourbillons. 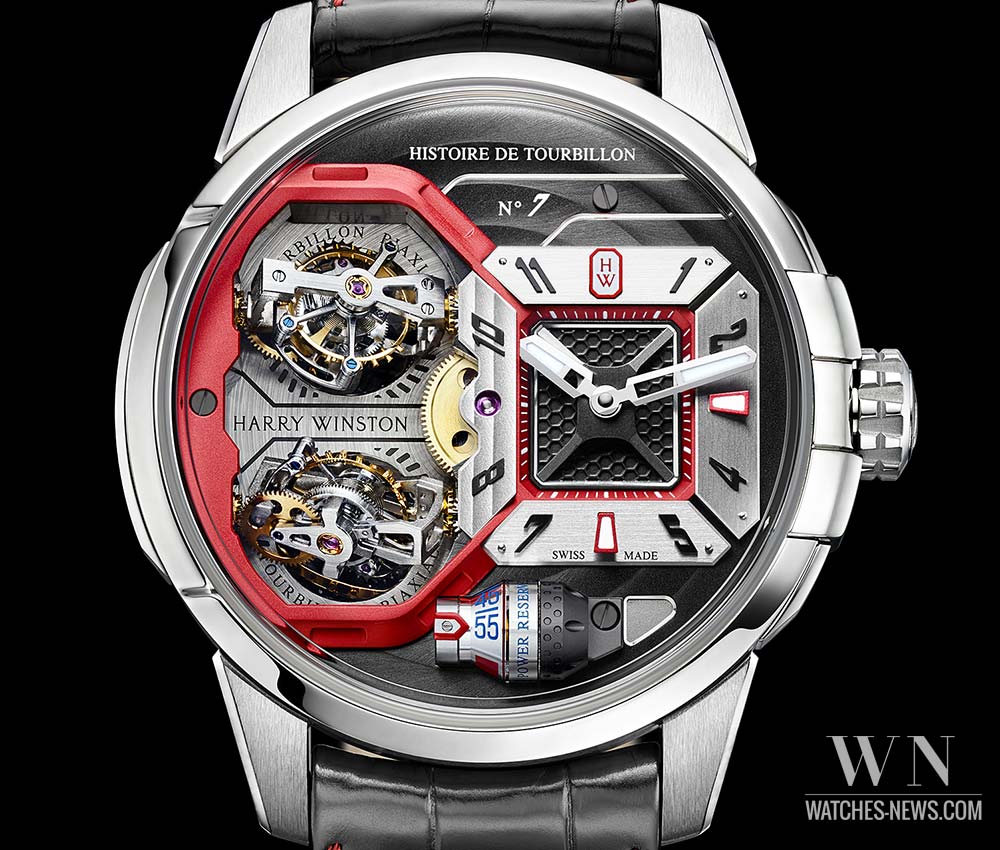 The complications (framed in red or anthracite depending on the model) lie at 8 and 10 o’clock and have the same structure but different frequencies and speeds (one with 45 seconds and the other with 75 seconds). It’s all linked up and controlled by a spherical differential. The manual wind HW4502 calibre brings to life the fabulous complication and time functions.

The hours and minutes pop out of the openwork dial as the two hands on the left of the dial glide over pyramid markers above a cylindrical power reserve.

In 1816, the French clockmaker and painter Louis Moinet (1768-1853) created the first chronograph, naming it the compteur de tierces (“thirds counter”). To celebrate this two-hundredth anniversary, the Ateliers Louis Moinet, which were founded in 2004 and perpetuate the memory of the horologist through exceptional stopwatches, have unveiled a mono-pusher chronograph in a limited edition of 20 watches: the Memoris 200th Anniversary Basel.

On the dial, tiny painted phosphorescent stars made using a fixed graver process form a starry backdrop to the passing of time. The hours and minutes, displayed with two “Goutte de Rosée“® (“dew drop-shaped”) hands, have been moved to a lacquered dial at 6 o’clock, while the seconds tick away at 9 o’clock, and the stopwatch functions are shared between the seconds, in the centre, with a golden hand, and a minute counter at 3 o’clock.

The rose gold case measures 46mm in diameter. It contains the LM54 automatic calibre, taking care of the various features, and provides a power reserve of 48 hours.

Introducing the Omega Speedmaster Grey Side of the Moon “Meteorite”

After taming the moon in 1969, the Bienne-based firm Omega is now launching the race to the stars, or rather to the meteorites, with its new model, the Speedmaster Grey Side of the Moon “Meteorite”, a contemporary and more technical version of the famous Moonwatch. 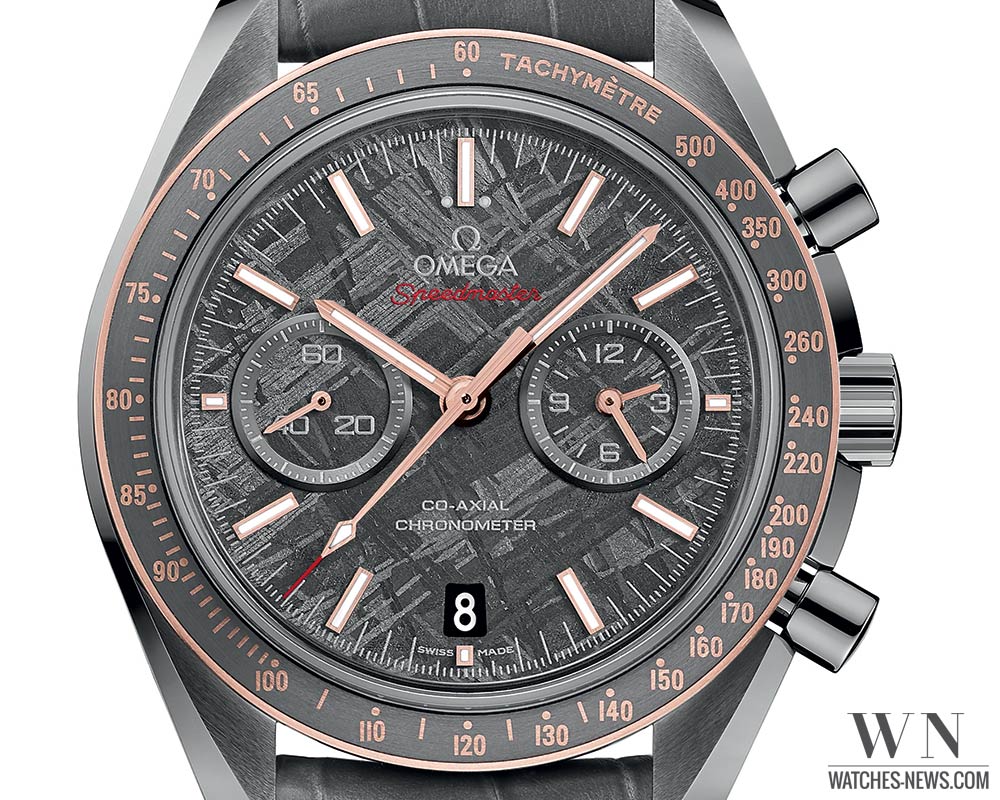