Although they first appeared in the early 20th century, pin-ups – female figures generally shown lightly dressed and in sensual poses – enjoyed their golden age during the Second World War. Inspired by US comics, their smiling faces and generous curves were reproduced as decorations just under the cockpit on the fuselage (noses) of American, and to a lesser extent, British war planes. Hence the term “Nose Art“. Not only did these works of hope and freedom help identify and customise an aircraft, but they also helped keep up the troops’ morale. The Graham brand has decided to honour this long-standing military tradition by creating a series of four limited edition watches: the Chronofighter Vintage Nose Art Ltd.

Available in 100 pieces per model, the Chronofighter Vintage Nose Art Ltd feature four different pin-ups, two redheads, a blonde and a brunette, dressed in yellow, khaki, blue or pink outfits. Each pin-up has her first name on the left-hand side of the sunburst black or blue dial, above the double subdial showing the date and day of the week.

As is typical of the flagship collection by Graham, the steel case is 44mm wide and equipped with the famous start/stop ‘trigger’ for the chronograph function at 9 o’clock. A monopusher button at 10 o’clock resets everything to zero.

The case back is fitted with crystal glass, unveiling part of the mechanism driving the four Chronofighter Vintage Nose Art Ltd models, the self-winding calibre G1747. The mechanism has a power reserve of 48 hours, and drives the hour and minute functions (at the centre of the dial), the seconds (in a subdial at 3 o’clock), the day and date (at 9 o’clock), the chronograph second hand (in the centre) and the minute totaliser (at 6 o’clock).

JEANS AS A SECOND SKIN

Celebrating its 15th anniversary this year, the Chronofighter model has adopted a youthful and original design. A look at a furiously trendy teenage watch.

The particularity of teenagers is not to do anything like the others. On the contrary, they tend to choose anti-conformity or even provocation and rebellion, in spirit and appearance. This is somewhat the case of the Chronofighter model, first created in 2001, and whose creators, the Graham brand, are celebrating its 15th anniversary in 2016. This is a watch that impresses with its size, accentuated by its famous trigger, its face that leaves the workings visible without revealing them completely, and a thick, natural canvas strap that perfectly matches the spirit of the age. 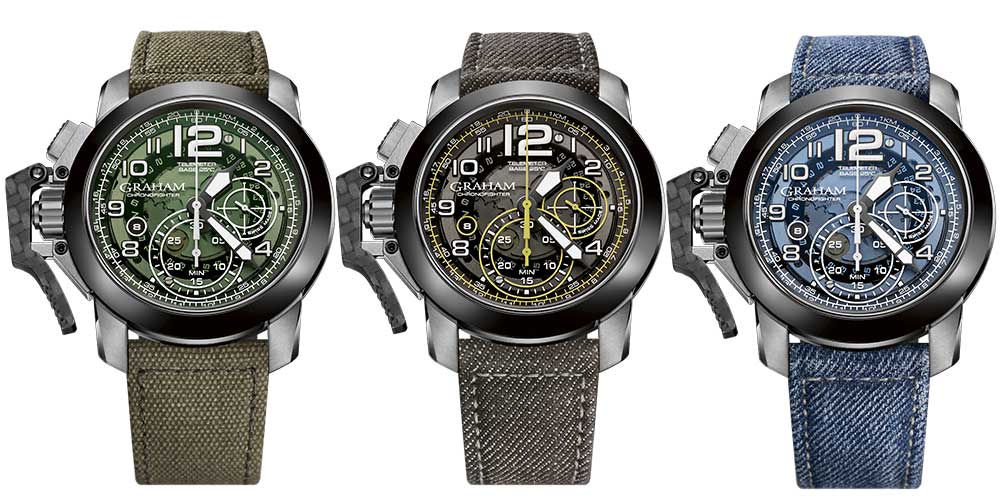 A trio of colours are on offer in this special collection of Chronofighter Denim chronographs with matching strap materials: dark grey, military khaki and jean blue, a little like in a jeans shop. Originally, denim was an ecru-coloured and sturdy cotton material with closely woven fibre, which was dyed indigo blue. After being worn by miners, workers and farmers, mainly in the 19th century, it is now mainly used to make jeans. This cross-generation garment, a symbol of rebellious youth in the 1950s, and of the Hippie movement in the 1970s, jeans are, above all, a watchword for comfort and freedom, particularly for the young, when they have yet to succumb to the traditional and dull suit/shirt/tie. Whether stone washed or double-dyed, slim or bootcut, this is a vital item of clothing in any wardrobe. And there is just one step from the closet to clothing for the wrist, a step that Graham has taken with this series of three models.

The steel case measures 47mm in diameter and is waterproof down to 100m. It is topped with a black ceramic bezel and, most notably of all, features a structure called a carbon trigger at 9 o’clock on the case and a pusher covered in grip rubber pattern at 10 o’clock. The trigger is used to set, stop and reset the Chronofighter Denim chronograph function. With the time and date functions, the watch is powered by the manual wind G1747 calibre, with a power reserve of 48 hours.

The dial features a sapphire-coloured, slightly opaque glass on the watch face. The hour rim is made up of large, white luminous Arabic figures encircled by a telemeter scale. Hours and minutes are shown by two wide hands of the “pilot” type, while the seconds are set apart in a counter at 3 o’clock. The date is discrete, appearing in a recessed window at 8.30. As for the chronograph function, the seconds run at the centre and the minutes run in a counter at 6 o’clock. All the indicators are white, except in the grey version of the Chronofighter Denim, where electric yellow is added.

A striking name, an impressive build and a nod to the past: this is the Chronofighter Vintage by Graham, a brand founded in 1995 inspired by the brilliant London watchmaker George Graham (1695-1751). This sturdy piece has a piston-shape trigger and pusher to start/stop/reset the chronograph and four different dials to celebrate the 15th anniversary of the collection that launched in 2001. 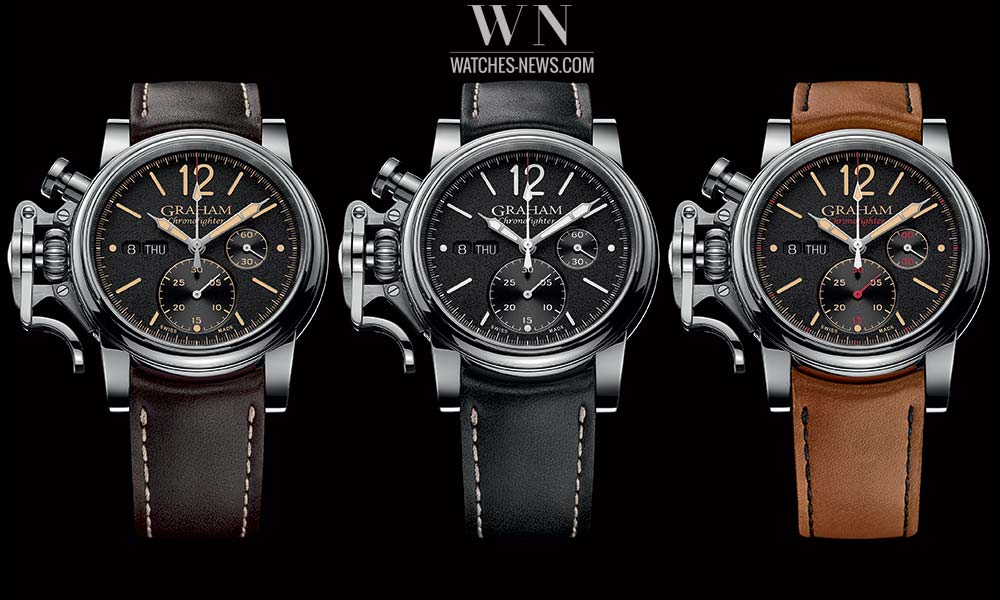 The 44mm steel case houses the self-winding G1747 calibre that fuels the time, date and chronograph functions as well as the 48-hour power reserve.

The grained black or blue sunburst dial has a silver or sandy hour rim beneath two white or beige pilot-style hands coated in Super-LumiNova®. The seconds appear in a counter at 3 under the double day and date display at 9. A large chronograph minute counter lies at 6 whilst the seconds count down in the centre.

“Black Arrow” is the name of a British rocket from the 60s and 70s used to put satellites into orbit. It’s also the name of a tactical shooter video game which features a military-style hostage rescue unit. But more importantly, “Black Arrow” is the name of the new Chronofighter Oversize, a self-winding watch whose steel and black PVD 47mm case has a black carbon trigger on the side to activate the fast start/stop function. The dial features a silkscreen camouflage print in khaki, sand or grey and a telemetric scale on the chapter ring; the hours and minutes are in large Arabic numerals with equally large hands coated in black Super LumiNova. The date appears in a display at 8 o’ clock whilst the 30-minute chronograph counter and small seconds stand at 6 and 3 o’ clock. Price: 6,900 CHF