CUT OUT FOR FEATS

With two limited series, Ulysse Nardin accompanies sailors on their 40,075 km journey for the next open-ocean race around the globe. 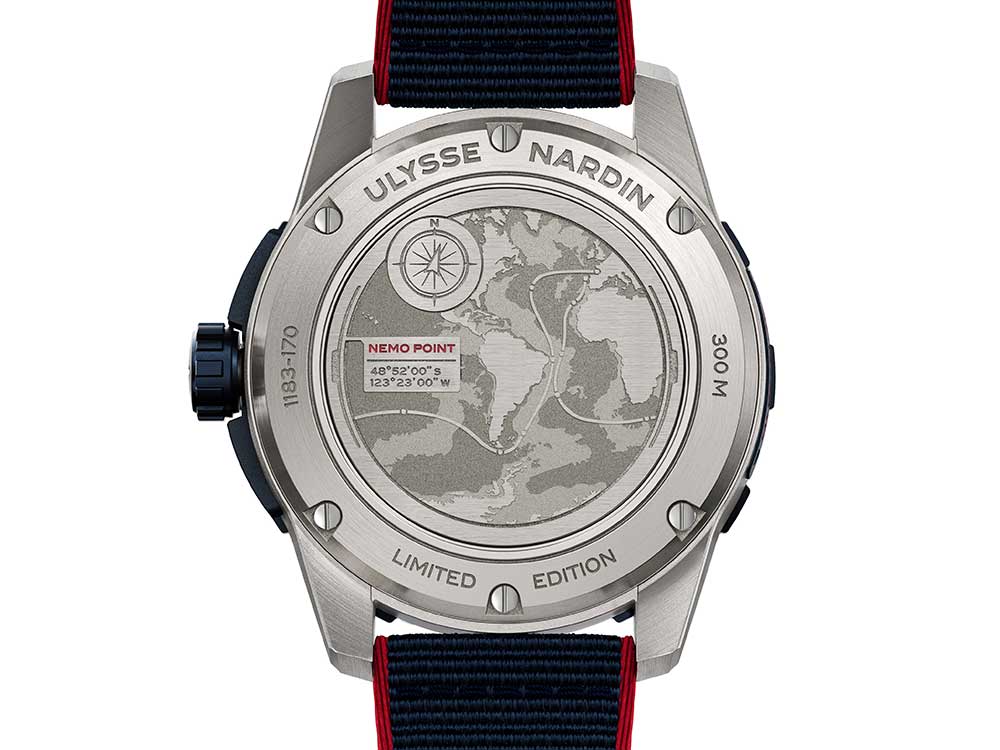 These models, bona fide diving instruments, are waterproof to 300 m and come equipped with a unidirectional revolving bezel. Diver X Cap Horn and Diver X Point Nemo are set on a comfortable Velcro-attached fabric strap which wraps perfectly around the bare wrist or over a neoprene wetsuit.

THE WOMAN AND THE OCEAN

As the watchmaker from Le Locle welcomes the international freediving champion Alessia Zecchini among its ambassadors, it is also unveiling a series of diving watches exclusively designed for women, including a limited edition bathed in white, gray and diamonds.

At just 27, Alessia Zecchini holds several world diving records, a series of awards that began in 2010 with a silver medal after spending her childhood at swimming competitions. This young Roman freediver recently became one of the famous “Ulysses”, the family of personalities from sports and the arts who represent Ulysse Nardin. For this Italian, diving provides a form of freedom and when she is alone in the middle of the silent immensity of the ocean, her only companion other than her equipment is the Lady Diver Great White on her wrist. 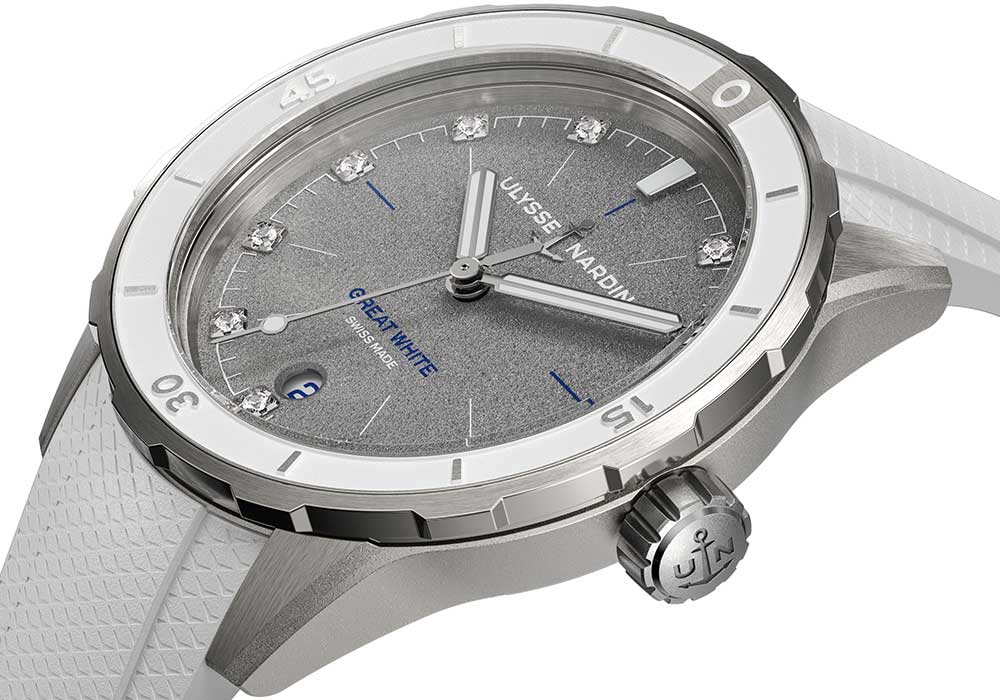 The Lady Diver comes in a stainless steel case hemmed with diamonds accompanied by a dial in mother-of-pearl or blue, or coated in black PVD embellished with a bezel in crimped rose gold.

THE RIGHT TO BE DIFFERENT

With new editions to pad out this avant-garde collection, Ulysse Nardin takes us on an astonishing journey through time, beyond fashions and trends. 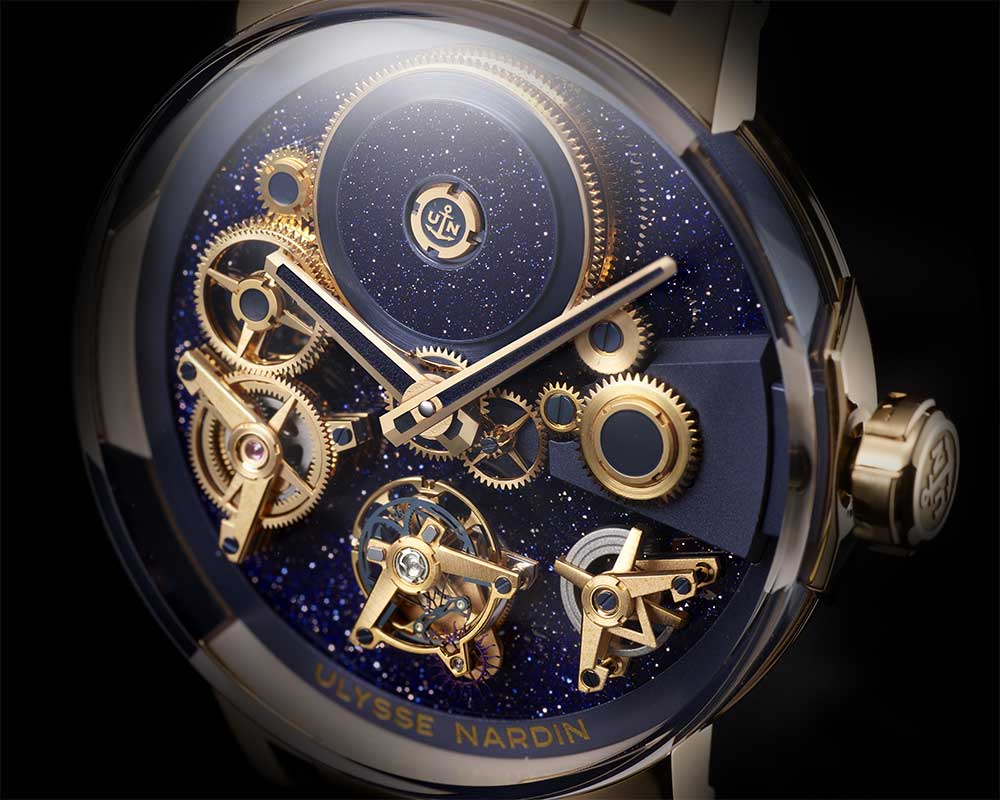 All these references are worn on a black or blue alligator strap.

This summer looks set to be a hot one! The latest creation by Ulysse Nardin is raising the temperature with a blazing high-tech case combining carbon and epoxy.

Want a change from the daily humdrum? Then opt for the volcanic Skeleton X Magma. With the summer season in full flow, the only thing for it is to free yourself of excess. Ulysse Nardin is following this philosophy to the letter by removing the dial providing a spectacular display. Less is more! Unveiled at the latest edition of the Salon de la Haute Horlogerie in Geneva, the Skeleton X stands out for its graphic architecture. An X formed of four index markers is surrounded by a rectangle and then a circle with Roman numerals on each side. The hour and minute hands coated with grey Super-LumiNova® skim over this lava-like composition. All these elements are contained within a 43 mm case decorated with a magma of molten materials evoking an eruption crater. The combination of carbon fiber and red epoxy resin give each piece a unique design. 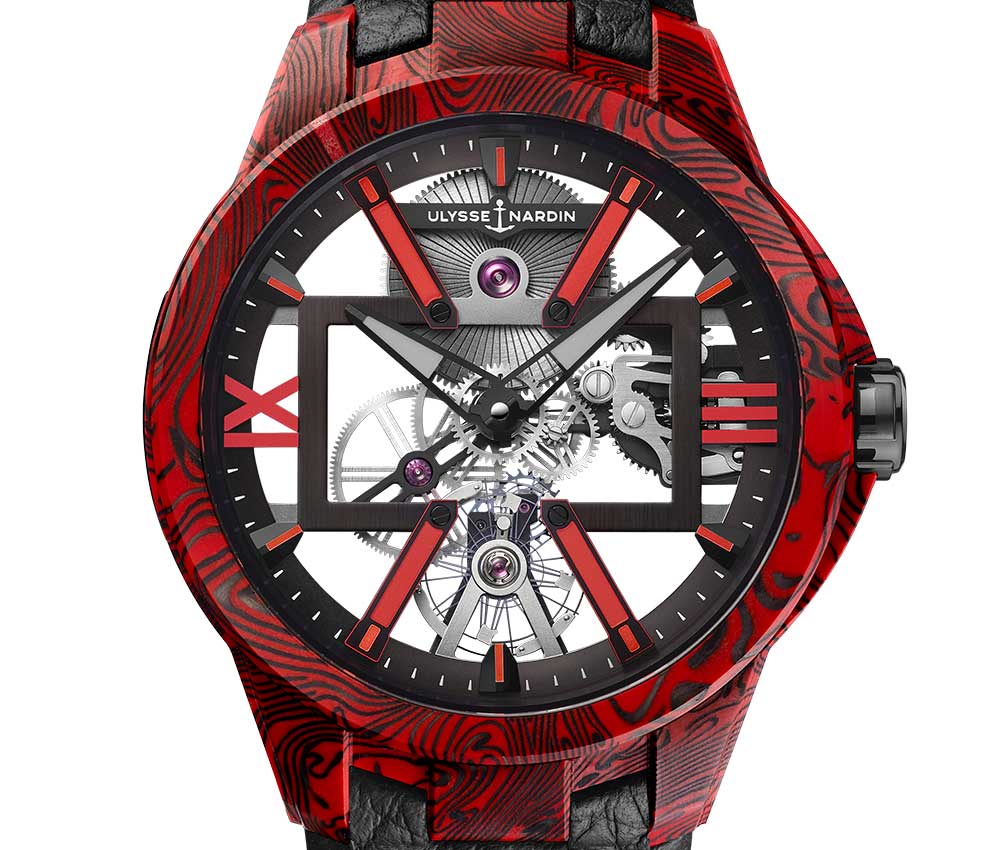 The energy of this timepiece does not come from plate tectonics but from the UN-371 caliber fitted with a large 3 Hz balance wheel, escapement wheel and silicon anchor. Once wound, this manual-winding movement, which can be seen through the sapphire crystal, provides a generous power reserve of around 96 hours.

This smoldering creation, water resistant up to 50 m, continues the current color trend between garnet and carmine. It comes with a comfortable black leather strap finished with a pin buckle.

These two new limited editions, which are the latest additions to the Marine Torpilleur collection, draw their inspiration from the military realm, and primarily the Navy which has shared a close relationship with Ulysse Nardin since 1846. 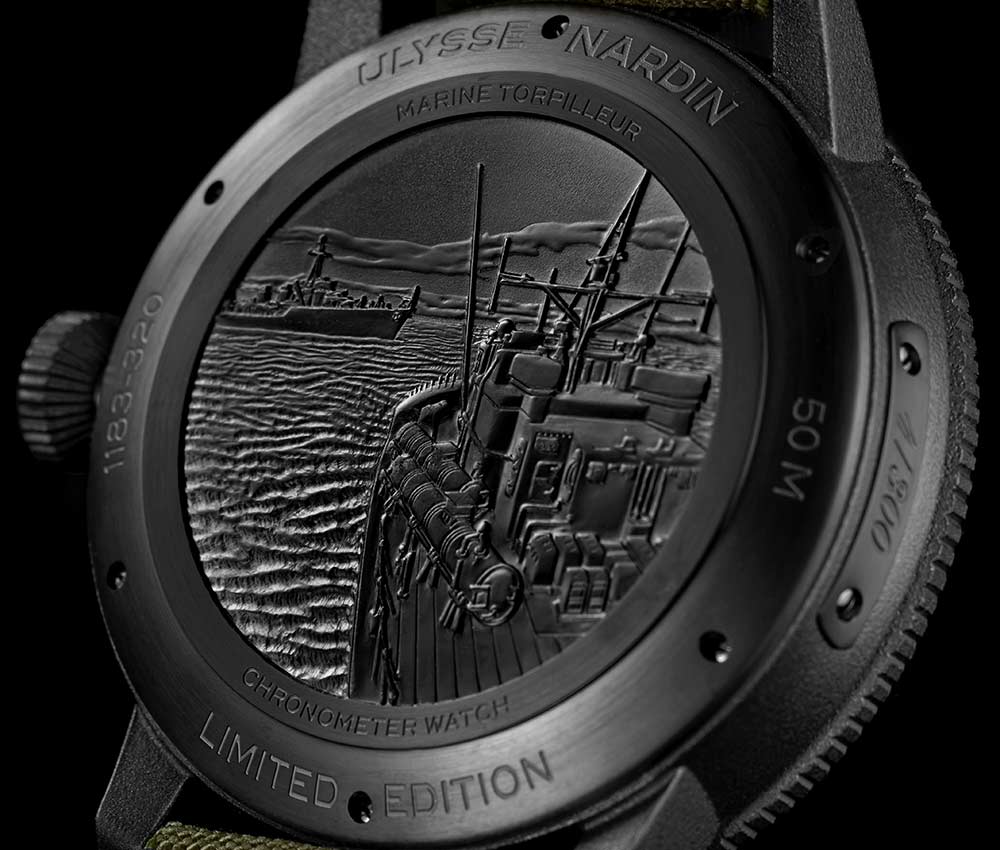 On the carefully sandblasted dial, the Arabic numerals of the hour markers are finished off with an eggshell tint with a dash of blue. In the center, two pear-shaped hands, in khaki or gold, display the hours and minutes while the seconds are displayed on a small second counter at 6 o’clock. These functions are regulated by the self-winding COSC-certified UN-118 caliber which also offers a power reserve of 60 hours.

A watch inviting you to weigh anchor and set sail for a new timekeeping world, where imagination combines with a surprising mechanism. All aboard! 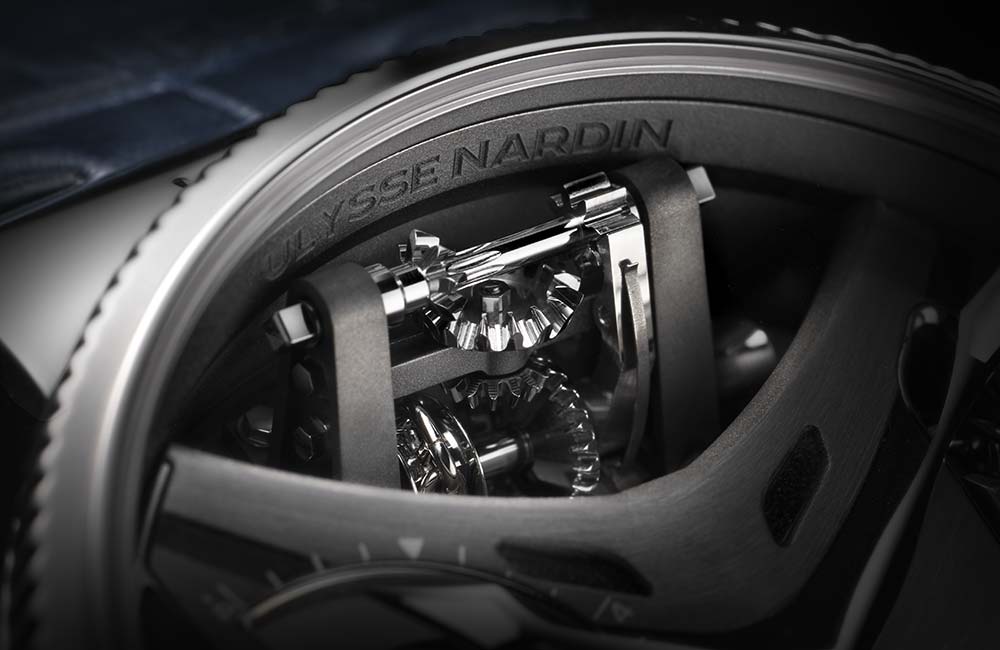 For the Monaco Yacht Show, Ulysse Nardin launched four new Diver Chronometer models, including a limited edition watch with the imposing and impressive silhouette of a great white shark on the back.

Carcharodon Carcharias is the scientific name for one of the most fearsome predators in the sea, the great white shark. Following dubious publicity from Steven Spielberg’s 1975 film, Jaws, the shark was for a long time known mistakenly as a maneater, but has acquired a new reputation in recent years. In several recent studies, the specialists of ocean life have given us a new and less frightening view of the great white shark. This pitiless predator for the inhabitants of the sea is actually very shy when it comes to humans, and has inspired the watchmakers Ulysse Nardin to create 300 Diver Chronometer Great White watches as part of a quartet of models unveiled at the end of September. 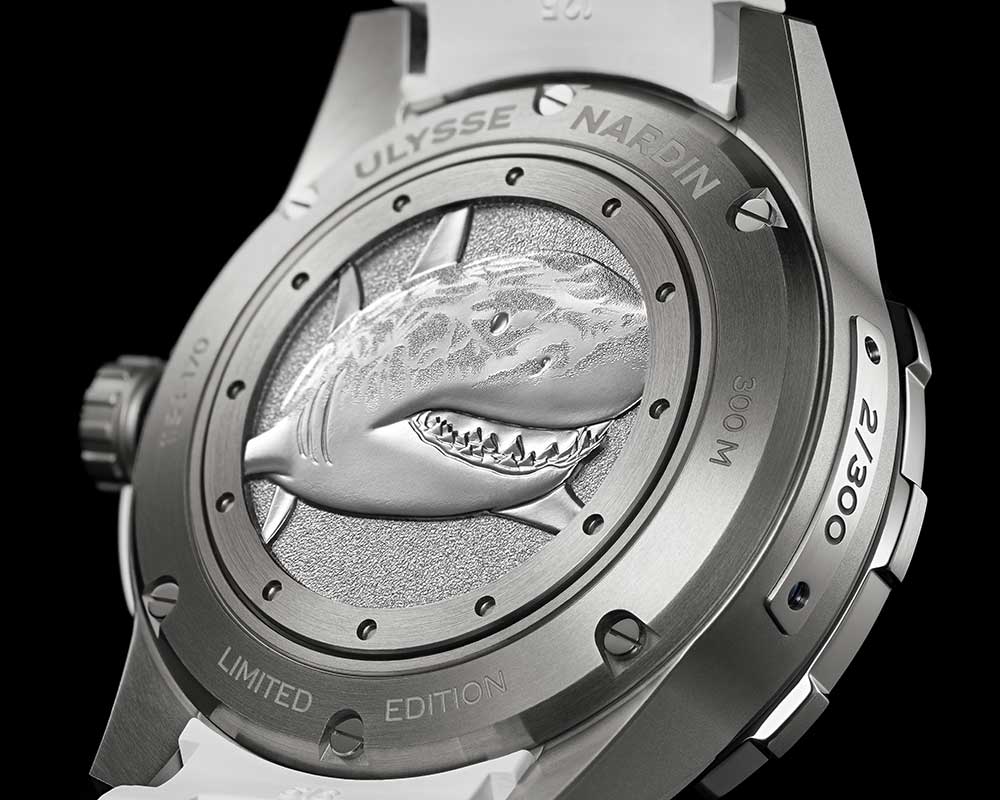 The titanium case on the Diver Chronometer Great White, featuring the self-winding calibre UN-118, boasts a generous diameter of 44mm. It comes with a unidirectional revolving bezel, where the diving scale, in 15-minute sequences, is shown embossed against the white grooved background. On the bright grey dial with sanding to provide a mottled effect, the hours and minutes appear in the centre with wide, lume-coated hands. The seconds have been moved to be a counter decorated with white and blue touches at 6 o’clock, where the date sub-dial is also located. The watch has a power reserve of 60 hours, shown in an indicator at 12 o’clock.

A white rubber strap rounded off with a tang buckle completes this highly elegant watch, perfectly cut out for adventure in deep waters, since it is watertight down to 300m.

First launched in 2017, the Marine Torpilleur collection by Ulysse Nardin has now been expanded to include two new models, one with a classic style made of rose gold and the other, more contemporary , made of steel.

Torpilleur is French for torpedo boat, “a small high-speed warship designed to carry out torpedo attacks in coastal waters“ (Collins). Torpedo boats have now largely disappeared, replaced by patrol boats, among others, but were widely used in the 20th century. The boat’s job was to attack large warships and submarines on the water’s surface by launching motorised explosive devices. Ulysse Nardin has borrowed the name for its collection of timepieces created in 2017: Marine Torpilleur. Although the watch has nothing warlike about it, it does carry within it a long history linking the brand to the world of the sea, going all the way back to 1846, when the watchmaker Ulysse Nardin opened his own workshop specialised in designing accurate and reliable sea chronometers. 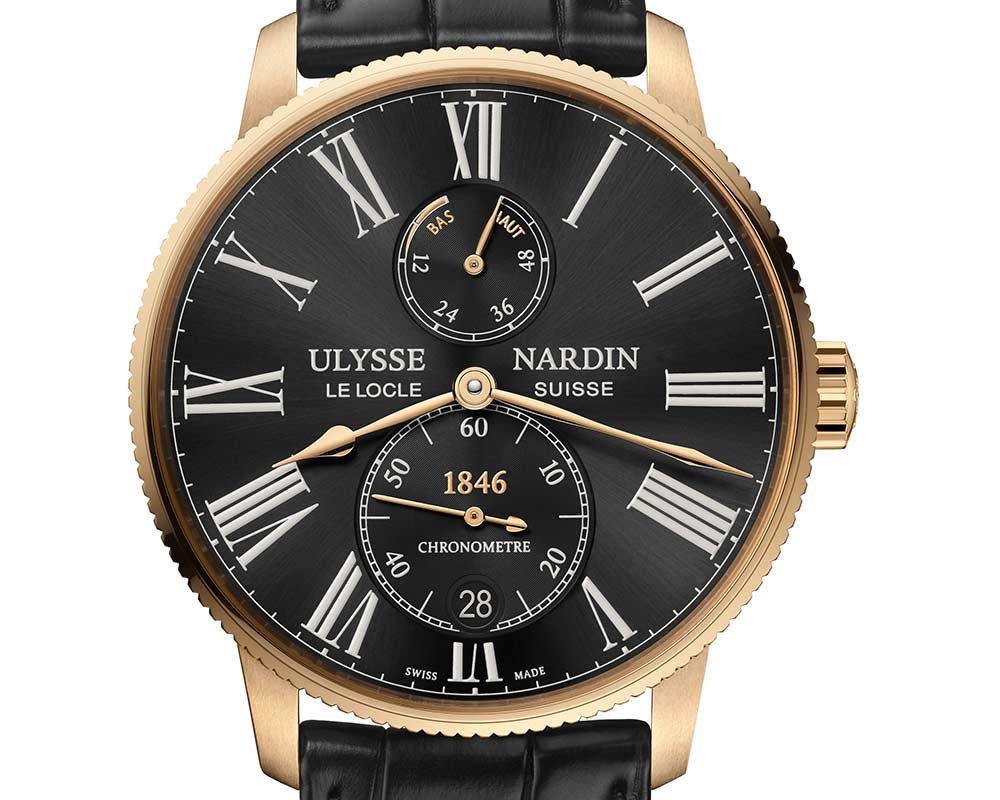 The new Marine Torpilleur models that have just been added to the range have two faces that are quite different from their predecessors but every bit as elegant. While the layout on the sunburst dials is the same, the colours used give them a distinct identity: the black combined with the pink gold adds a classic touch to the wrist, while the steel version with its grey dial is better suited to a contemporary mood.

The hour rim consists of large, white and slender Arabic numerals encircled by a discreet minute track around the chapter ring. In the centre, a pair of pear-shaped hands with a copper-coloured body display the hours and minutes. The seconds have been moved to a large counter at 6 o’clock with the date shown in its lower half, against a white background for the steel Marine Torpilleur and tone-on-tone for the rose gold version. Small golden touches can be seen here and there – on the second hand and on the power-reserve indicator at 12 o’clock.

At the heart of the 42mm-wide case is the calibre UN-118, a self-winding movement providing 60 hours of power reserve.

TO THE DEPTHS OF THE OCEANS

No matter how deep you dive, with this new watch by Ulysse Nardin you are sure to enjoy your underwater outings in the best conditions.

Ulysse Nardin has joined the very exclusive club of watchmaking brands including in their catalogue a diving watch that is water-resistant down to 1,000m. With the Diver Deep Dive, the brand brings us a real instrument to resist the pressure of the sea depths. This series, limited to 300 pieces, features all the elements needed for a totally safe dive. Its impressive, 46mm-wide titanium case has a helium valve at 9 o’clock and a crown at 2 o’clock protected by a secured moveable mechanism that is machined in the same material as the case. The unidirectional bezel with 12 markers is partly coated in rubber for improved handling. On the blue dial, large hour and minute hands point to indices coated with luminescent material to provide excellent visibility on land and underwater. Reinforcing the marine aesthetic, the steel caseback is stamped with a hammerhead shark, a motif that can also be found on the dial and the side of the crown protector. 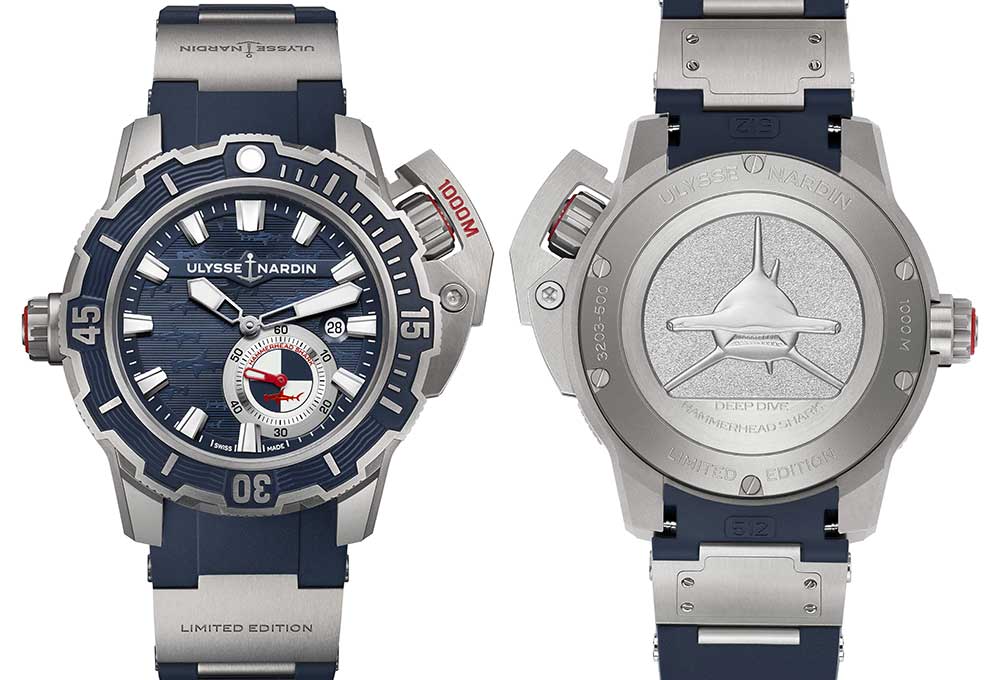 This sports watch is driven by an automatic movement with a silicon spiral and escapement. The calibre UN-320 made by Ulysse Nardin provides the watch with 48 hours of power reserve.

The Diver Deep Dive is worn with a rubber strap featuring an extensible element used to adapt to the variations in the wrist size as a result of the compression of a neoprene diving suit.

Officer’s watches stand out through a shared style, providing optimal readability and easy setting. The brand has revisited this watchmaking classic and equipped it with a powerful movement.

Ulysse Nardin offers us a fresh glimpse into its watchmaking world, where the focus is on precision. The Marine Torpilleur model released this year is now available in an original version called the Military. This version gains in simplicity with the disappearance of the power reserve indicator, the date counter and the replacement of the Roman numerals. As its name implies, the timepiece borrows its aesthetic codes from army pocket watches from the early 20th century.

So it has a large 44mm-wide steel case housing a beige or black dial and extra-large Arabic numerals with luminous coating. A couple of Roskopf pear-shaped hands indicate the numerals. The time information is all wonderfully readable, and the bezel and crown are fluted to make handling easier. The composition is rounded off by a running seconds hand at 6 o’clock. The red series number is a reminder that this edition is limited to just 300 pieces.

The Marine Torpilleur Military comes with a cutting-edge mechanism. With its silicon anchor escapement, the automatic movement is certified as a chronometer by the rigorous Contrôle Officiel Suisse des Chronomètres (COSC). The calibre UN-118 developed by the brand provides a generous power reserve of 60 hours.

Depending on the versions, the watch is worn on a comfortable and elegant brown or black leather strap, adorned with a folding clasp.