Jaeger-LeCoultre has put all its artisan and artistic expertise into the Reverso à Eclipse Tribute to Vincent van Gogh to celebrate the work of the fascinating post-Impressionist painter in collaboration with the Van Gogh Museum in Amsterdam.

There are just 4 of this majestic piece available whose dial depicts the famous “Self-Portrait” painted in Paris between 1887 and 1888. Vincent van Gogh (1853-1890) is portrayed in blue pea jacket with his easel, palette and brush in hand. This enamel miniature can be concealed or revealed when you want. Just turn the small notched wheel at 1 on the platinum case (46.5×29.25mm) and two silver shutters bearing the hour numerals will open to reveal the picture.

The manual wind JLC 849 calibre fuels the 35-hour power reserve and hours and minutes tracked by two black hands on the dial.

The fifth Passione Engadina race brings Italian vintage cars together to drive from Saint Moritz to the Engadin in the Swiss Alps. The event from August 19th to 21st paid tribute to Alfa Romeo and one of the sponsors, Baume & Mercier, has devoted a limited edition watch to it: the Capeland Chronograph Flyback Passione Engadina. 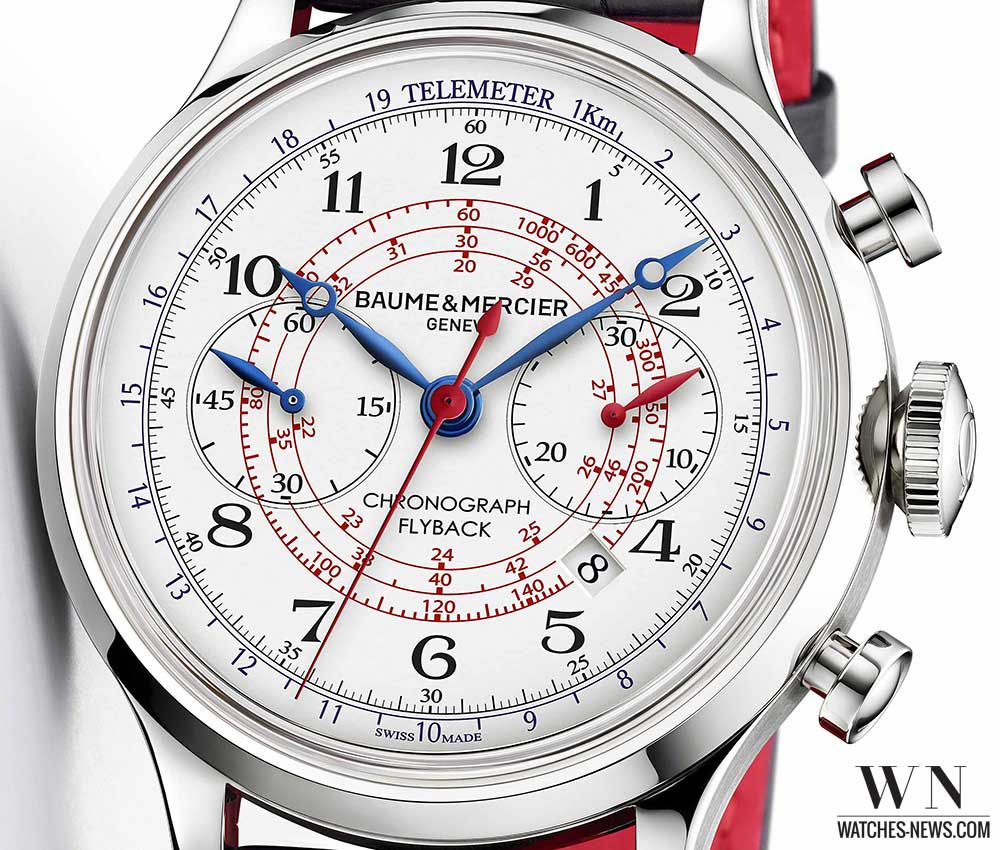 Not only is the vintage-style watch inspired by a 1948 Baume & Mercier mono-pusher chronograph but it also has a cool retro domed white matt dial. The Breguet Arabic numerals are tracked by blue steel “pomme” hands whilst the telemeter and tachymeter scales glow blue and red.

The 44mm steel case houses the self-winding La Joux-Perret 8147-2 calibre which powers the time, date (at 4.30 on the dial) and flyback chronograph functions.

The schooner called America won a sailing competition in 1851 that was renamed the America’s Cup six years later in honour of the famous ship. The race is soon to host its 35th event making it the perfect time for Ulysse Nardin, partner of the Artemis Racing team, to unveil a limited gold edition (30 available) of the Classico Schooner America. 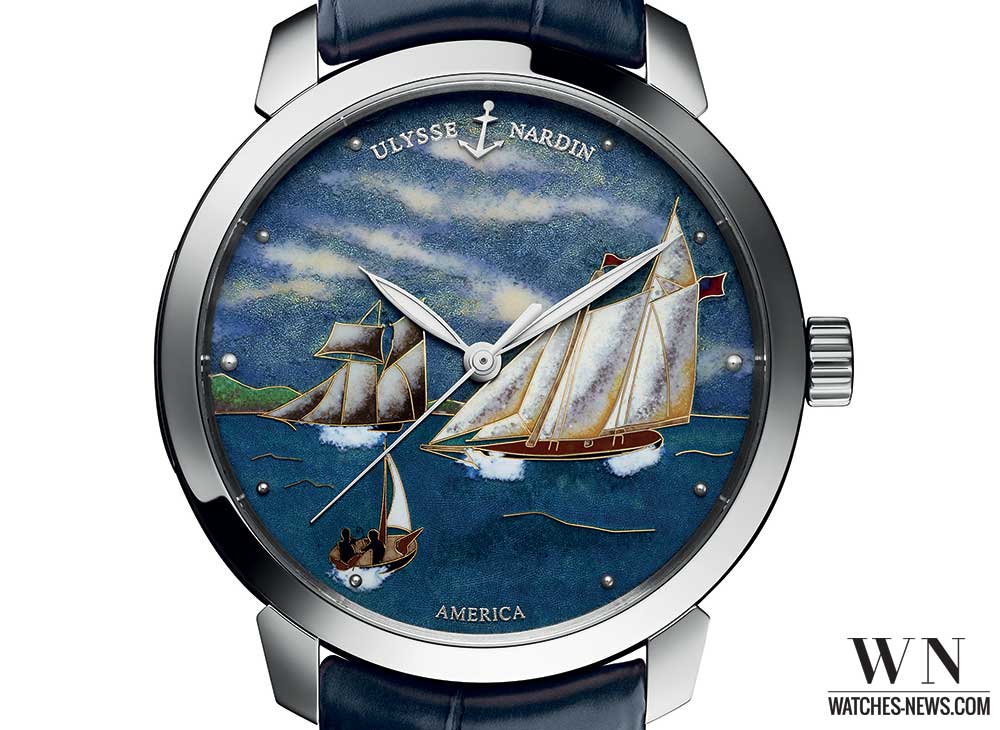 The cloisonné enamel dial sets the scene for a regatta near England’s Isle of Wight led by the schooner America. Two leaf-shape luminescent hour and minute hands burst from the middle of the miniature artwork with a central seconds hand all in silver or gold depending on the model. Dots of various sizes make for low-key time markers.

The time functions are fuelled by the self-winding UN-815 calibre in the 40mm rose or white gold case.

Not so long ago we unveiled a rather classic version of the Breitling Chronoliner adorned with dashes of rose gold. Here’s a sportier and edgier take on the triple time zone chronograph: the Chronoliner Blacksteel, a model that blends steel and ceramic.

A highly resistant carbon-based coating covers the large 46mm steel case. The watch has a bidirectional black ceramic bezel engraved with a 24-hour scale for the third time zone and houses the COSC-certified self-winding Breitling 24 calibre. 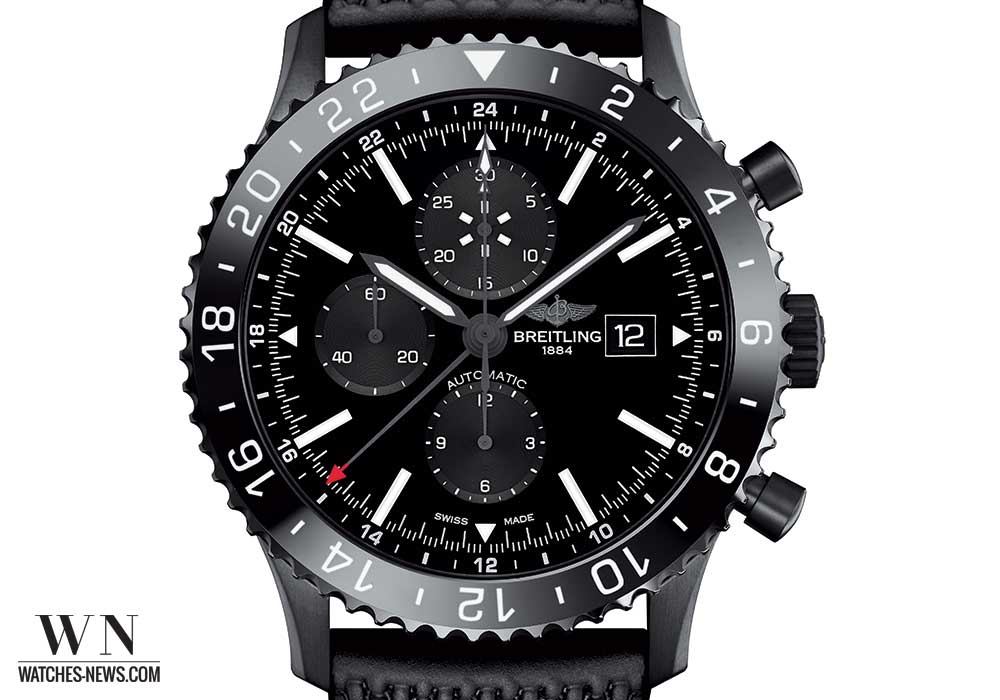 The black dial features three all-black counters (small seconds at 9, chronograph minutes at 12 and hours at 6) and hands whilst all the markers in figures (minute track, 24-hour scale for the second time zone, date at 3) stand out in white or white-rimmed silver.

The story of Montblanc is among the most fascinating, especially if you’re a fountain pen enthusiast like me. It began in 1906, 110 years ago, when an engineer, banker and specialist stationery salesman from Hamburg and Berlin set sail to the USA. After the trio’s American adventure, a fountain pen with a built-in ink well was born and revolutionised writing. Four years on and the company was named Montblanc in tribute to the three founders’ demanding quality standards and the highest peak in Europe at 4810m.

Without the ferry boom in the early 20th century following innovations such as the steam engine and steel hulls, transatlantic boat journeys wouldn’t exist, Hamburg wouldn’t have become a major port city and our three German entrepreneurs wouldn’t have been able to visit the US. The 4810 collection, launched in 2006 but with fresh technical and design features in 2016, is like a multiple celebration. It honours not only the memory of the Hamburg brand’s founders but also the golden age of ferries, 110 years of German engineering and Europe’s summit.

The exclusive limited edition timepieces have been launched to celebrate the 110th anniversary including one available in three versions. The self-winding trio (two wristwatches and one pocket watch) embody Montblanc’s technical skills thanks mainly to Minerva’s experience.

In terms of design, the 4810 collection has a new dial which now bears the German brand’s logo on most models, has Roman numerals on its hour rim and a more streamlined case and lugs. 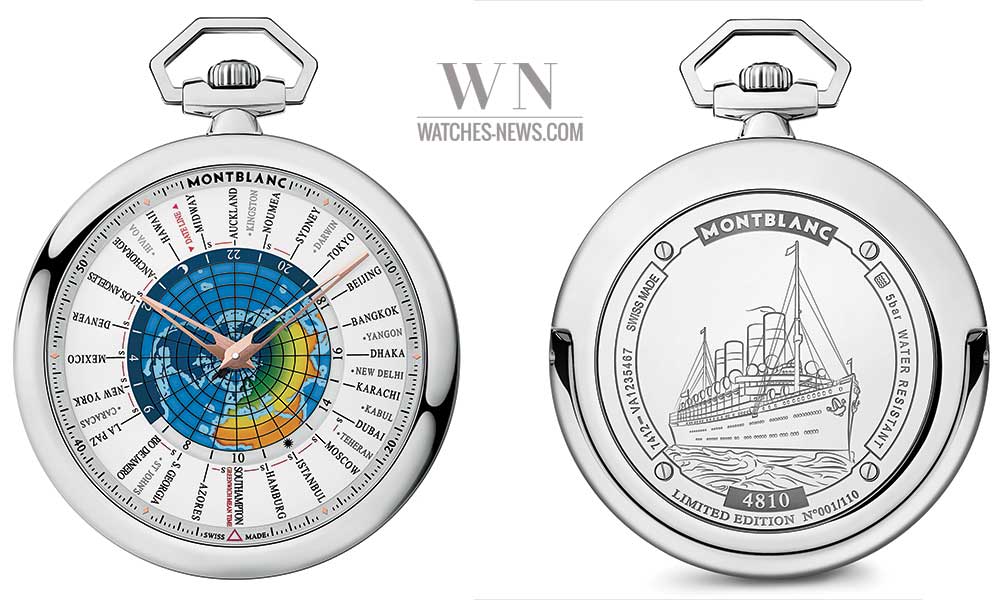 If there’s one big trend to spot in 2016, it’s blue’s big comeback. It may often be dropped for more popular, mainstream and easy to match colours like black, white and silver but blue has popped up in collections over the last few years. It keeps a low profile but it’s definitely here, often in the small details. Now it’s back and coating men’s and women’s watches ready to sail the high seas, walk the earth and travel the Milky Way as it washes over the straps.

Blue may be seen as cold in graphic art but it’s a colour that’s full of tone and life. Here are four examples to prove it.

When you think of blue, you naturally think of the ocean, the deep sea and whales. The colour whisks you off the coast to play at being an adventurer on or under the water which is exactly what Eterna’s Super KonTiki chronograph is made for. Its solid steel case (45mm diameter, 16mm thick) is topped by a rotating blue bezel; it houses the self-winding 3916A calibre which provides a 65-hour power reserve and the time, date and chronograph functions. The blue dial is dotted with luminescent triangular markers with the hours, minutes and chronograph seconds in the centre. Two blue counters at 9 and 3 o’clock display the seconds and chronograph minutes. 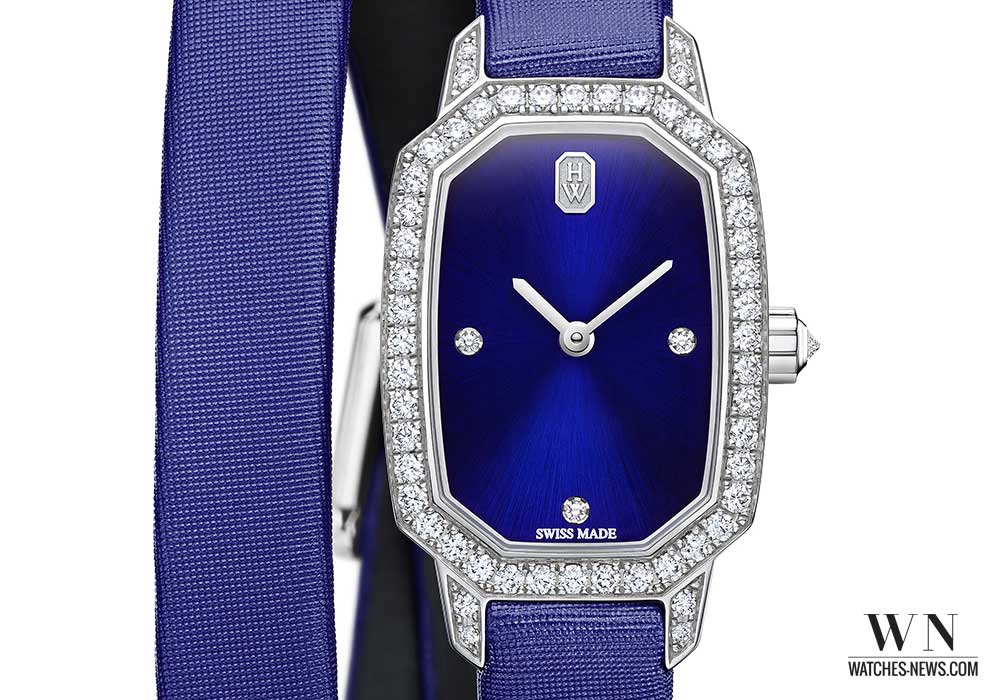 Life is peppered with emotional times and milestones that you want to remember forever: a wedding, birth or graduation. Baume & Mercier has devoted its timeless watches to celebrating these magical moments. Wearing a Classima is a daily reminder of an amazing life experience. 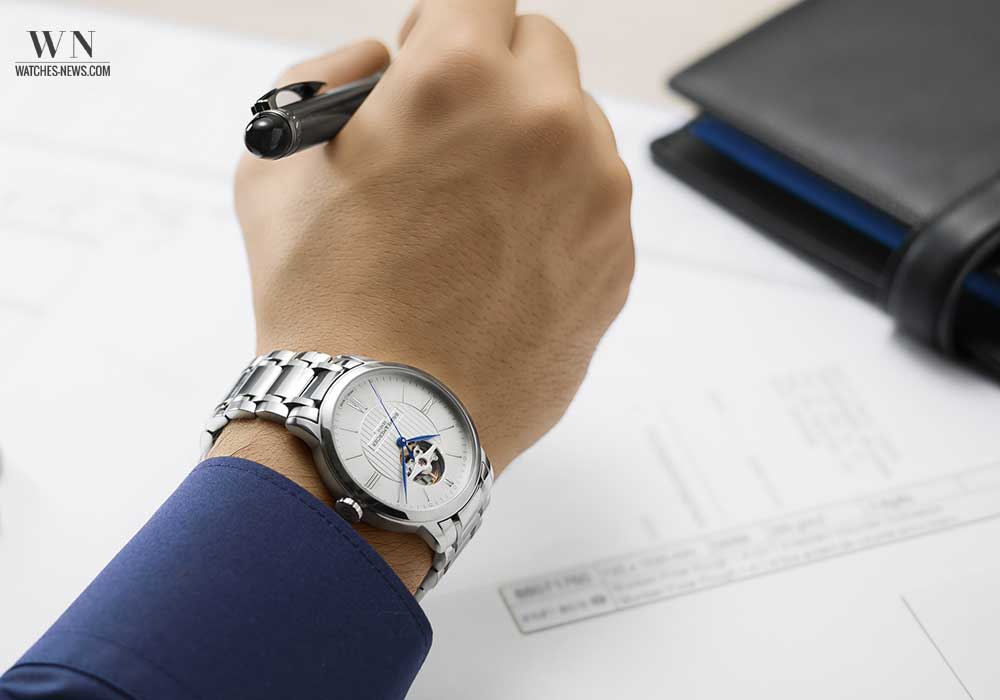 The collection is almost endless: steel cases in a range of sizes (31-42mm) with a polished, gem-set or rose gold bezel; self-winding movements with the date and second time zone; opalescent dials with a sunburst guilloché heart or vertical stripes and a window at 12 to watch the balance wheel work its magic; silver Roman hour numerals amidst baton markers, a subtle minute track, blue 24-hour scale and metal or blue leaf-shape hands.
As the name suggests, Classima is a classic watch family with a contemporary twist.

Piaget Polo first appeared in 1979 and soon became world famous for its unique looks and seamless strap and case combo. If there’s one thing that Piaget excels in, it’s shapes and especially circles and ovals just like on the new Piaget Polo S whose round case has a cushion-shape dial.

Five new models have joined the collection: three self-winding watches in three colours (opalescent, blue and grey) and two chronographs in two classic hues (white and blue). All five have the same 42mm round steel case topped with a large fitted bezel in brushed metal. 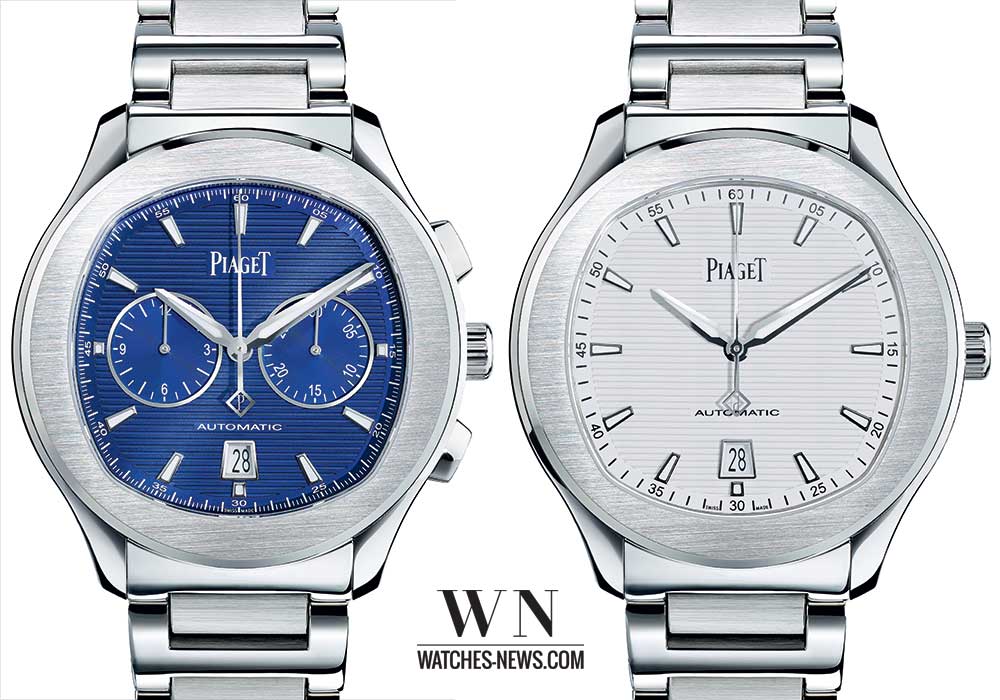 Two new self-winding movements have been designed to power the functions on the striped dials: the 1110P calibre brings to life the hours, minutes and seconds in the centre and the date at 6 whilst the chronograph is fuelled by the 1160P calibre.

The new Chronoliner by Breitling is a limited edition (250 available worldwide) that’s much more than a watch. It’s a timekeeping gadget for pilots and globetrotters with three time zones so you’ll feel at home no matter where in the world you are!

Its large 46mm rose gold case houses the self-winding and COSC-certified Breitling 24 movement. Not only does it fuel a 42-hour power reserve but also the time, chronograph, date and triple time zone functions.

The second time zone lies in the centre of the black dial with a red-tipped gold hand and 24-hour scale whilst the third appears on the black ceramic rotating bezel. The hours and minutes tick by in the centre, the date stands at 3 while three sunken counters display the small seconds (at 9) and chronograph minute and hour counters (at 12 and 6).

2016 is all about blue be it on dials (including hands and markers) or straps. The supposedly “cold” colour is ever poetic as it brings to mind azure waves in a calm sea and the blue sky on a summer’s day. Panerai has splashed it over the dial of the Radiomir 1940 10 Days Gmt Automatic Oro Rosso – 45mm (PAM 00659), exclusively available from its stores worldwide. 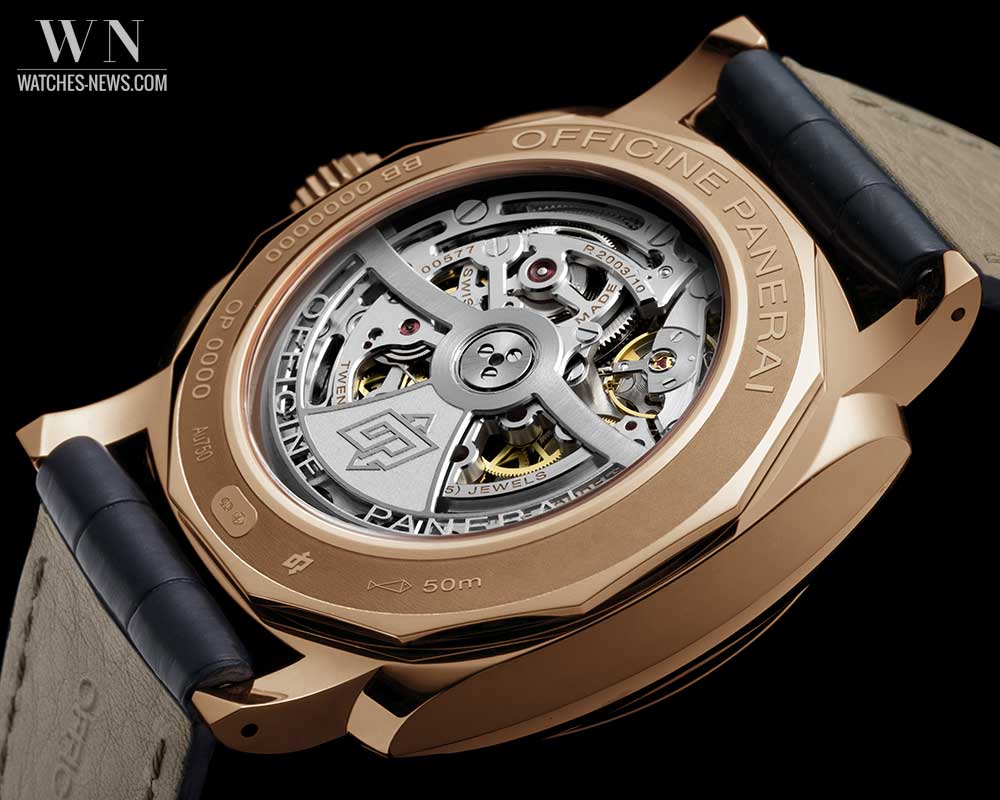 The sunburst satin-finish dial glows with hints of gold that add warmth to the ocean hue: hour rim with Arabic numerals and markers, hands (hours, minutes and second time zone), small seconds in an AM/PM indicator (at 9), date (at 3) and linear power reserve indicator (at 6).

The 45mm rose gold case houses the self-winding P.2003/10 calibre which is the first skeleton movement to be made by Panerai. Its three barrels fuel a 240-hour power reserve.