A TRIBUTE TO TRAVEL IN PREMIER CLASS

The Lange 1 Time Zone “25th Anniversary” by A. Lange & Söhne is another installment in the collection of 12 limited-edition series marking 25 years of the Lange 1.

2019 is a very special year for A. Lange & Söhne. The famous brand is celebrating 25 years of its Lange 1 by releasing a special limited edition of this iconic timepiece every month. Each one is setting the watchmaking world on fire and is expected to culminate in a blaze of glory. The latest model to be revealed in this anniversary collection has everything that a refined and demanding traveler could desire. The 25-piece Lange 1 Time Zone “25th Anniversary” displays two time zones in two dedicated areas on its solid silver dial. The first zone is for the home time, the second smaller zone tells the time of one of the 24 time zones listed in the city ring. Both have a day/night indicator. The piece is completed with the German brand’s beloved outsize date. 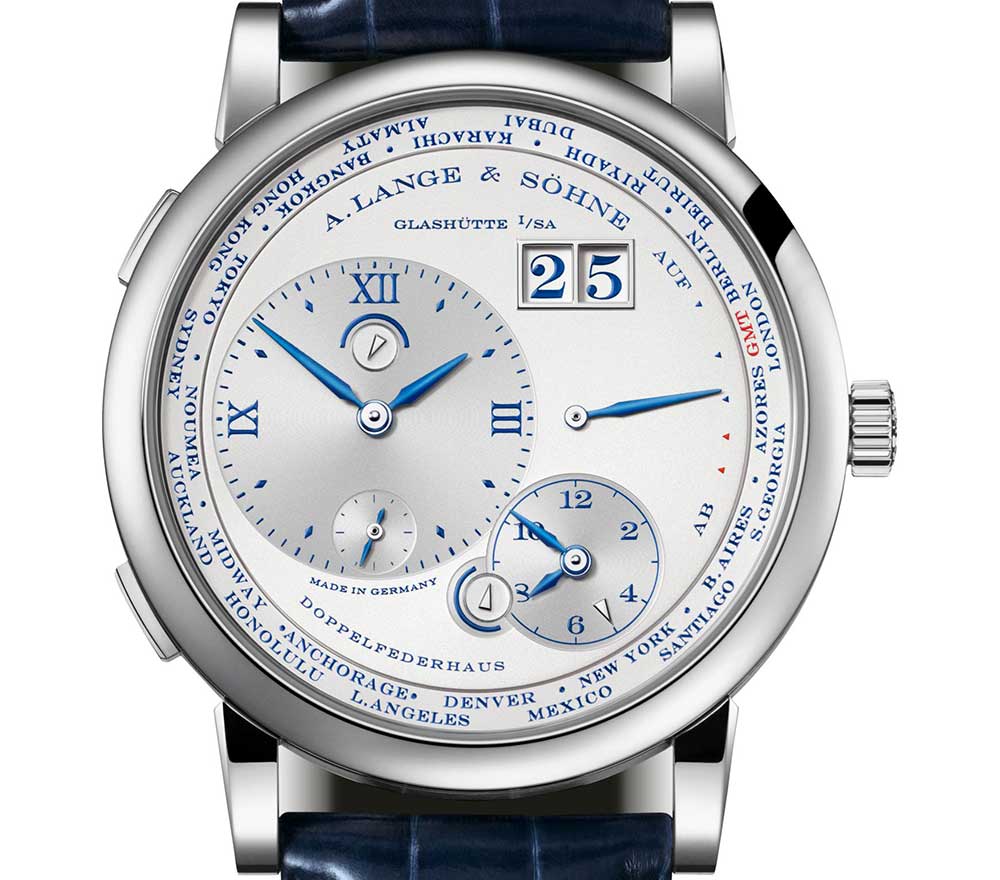 THE MOON IN ALL ITS SIMPLICITY

The night sky is elegantly brought to life on the dial of the latest addition to the The Longines 1832 collection which pays homage to the year the eponymous brand was founded.

1832 marks the year of creation of a watchmaking establishment in Saint-Imier by Auguste Agassiz (1809-1877), accompanied by his two partners Henri Raiguel and Florian Morel, which, from 1867 onwards, adopted the name Longines – the name of the locality in which the factory is built – on the dials of its watches as well as the famous winged hourglass. An unforgettable date in the history of the Swiss brand, it is honored with a classic and elegant collection named The Longines 1832. 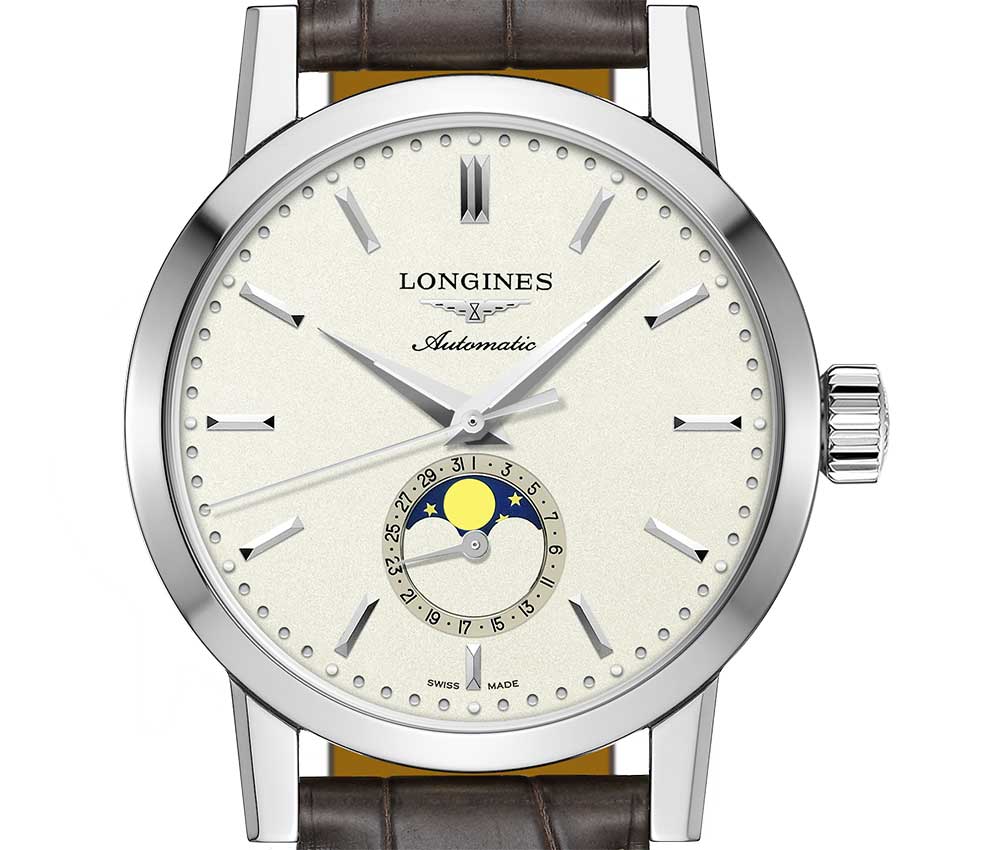 The latest addition to this product range, the L4.826.4.92.2 series gives pride of place to the night sky on its lightly opalescent beige sandblasted dial. The shape of the moon and its bed of stars are displayed in a fan-shaped open window at 6 o’clock circled by a calendar. The date is indicated with a small silver hand. At the center of the ivory face of this new The Longines 1832, two dauphine hands highlighted with a Super-LumiNova® strip and a second hand display the hours, minutes and seconds following a series of faceted index markers decorated with luminescent cabochons and beaded minute markers.

These functions are regulated by the L.899 (ETA A31.L91) caliber, a self-winding mechanical movement which vibrates at a gentle frequency of 25,200 oscillations per hour and provides a power reserve of 64 hours. This movement is visible thanks to the sapphire crystal case back. The 40 mm polished steel case comes with a brown alligator strap and a pin buckle.

A veritable ball of fire graces the dial of two new watches from the Saxony-based brand, combining the full force of typical 1960s design. A shade which makes your wrist pop!

The Sixties collection by Glashütte Original stands out for its styling from the 1960s, a period filled with creative freedom in all areas. In 2018, it wooed watch and design aficionados with a vibrant shade of green covering the face of two of its timepieces. The Saxony-based brand have done it again, this time opting for the warm glow of a summer sun, once again available in a duo both regulated by mechanical self-winding movements. 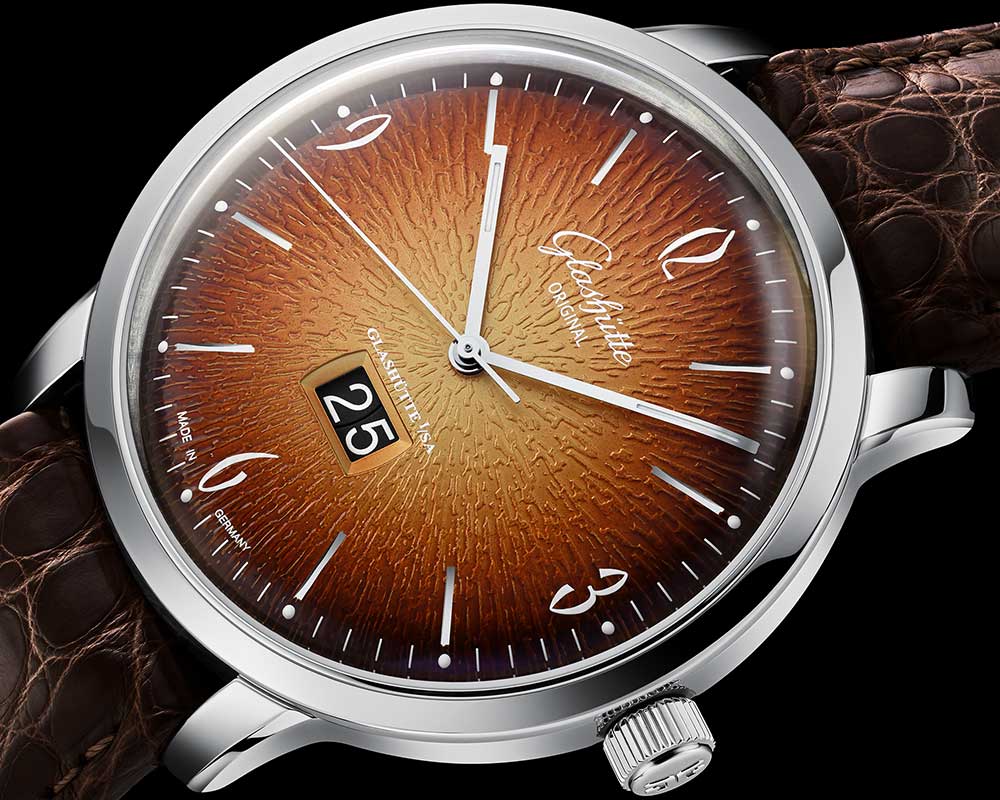 The polished steel cases measure 39 (Sixties) and 42 mm in diameter (Sixties Date Panorama) and house the 39-52 and 39-47 calibers respectively, which both vibrate at a frequency of 4 Hz and offer a power reserve of 40 hours.

This fiery sun is worn on the wrist with a chocolate brown alligator strap completed with a steel pin buckle.

For El Primero’s 50 year anniversary, Zenith is celebrating with a trio of chronographs crafted from precious metals. They have all stood the test of time: a half century!

To celebrate the jubilee of its iconic chronograph, Zenith offers not just one but three timepieces, each created in a limited series of 50. What do they have in common? They of course all have automatic caliber with a high frequency of 36,000 vibrations per hour, here the El Primero 400, but they are also designed as closely as possible to the original model. In this way, each El Primero A 386 Revival comes to life at the heart of a 38mm diameter case in white gold, rose gold or yellow gold. On the white-lacquered dial we find the totalizers and the small second counter with three distinct tints. The whole is encircled by a tachymetric scale. The shape of the indexes and hands adopts the one that created the unique identity of the timepiece. This sporty composition is also capped with domed glass, just like the iconic model born fifty years earlier. 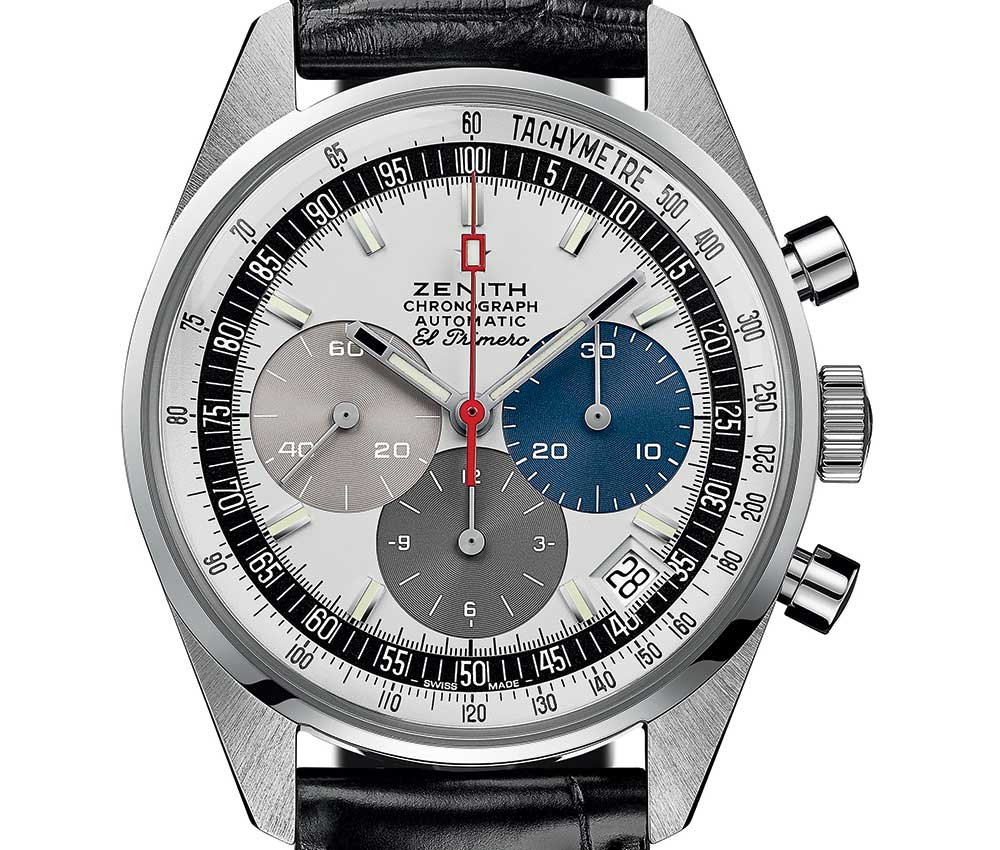 Last but not least, all El Primero A386 Revival chronographs have the benefit of an exceptional guarantee of 50 years!

A WATCH THAT PACKS A PUNCH

To celebrate its Night of Champions gala dinner in Las Vegas, Hublot unveiled a limited-edition chronograph, champion in its class.

Mike Tyson, George Foreman, Evander Holyfield, Sugar Ray Leonard… All the great legends of the noble art were there for the gala evening organized by the WBC (World Boxing Council). This fundraising event was held in aid of the José Sulaiman Boxers Fund created in partnership with Hublot in 2012, which provides help to retired boxers in difficulty. All the boxers attending the event received a Big Bang Unico WBC. This 100-piece limited edition combines a 45 mm microblasted and polished green ceramic case crowned with a bezel made of the same material and a self-winding movement. The HUB1242 calibre regulates the functioning of the time information for 72 hours once wound. 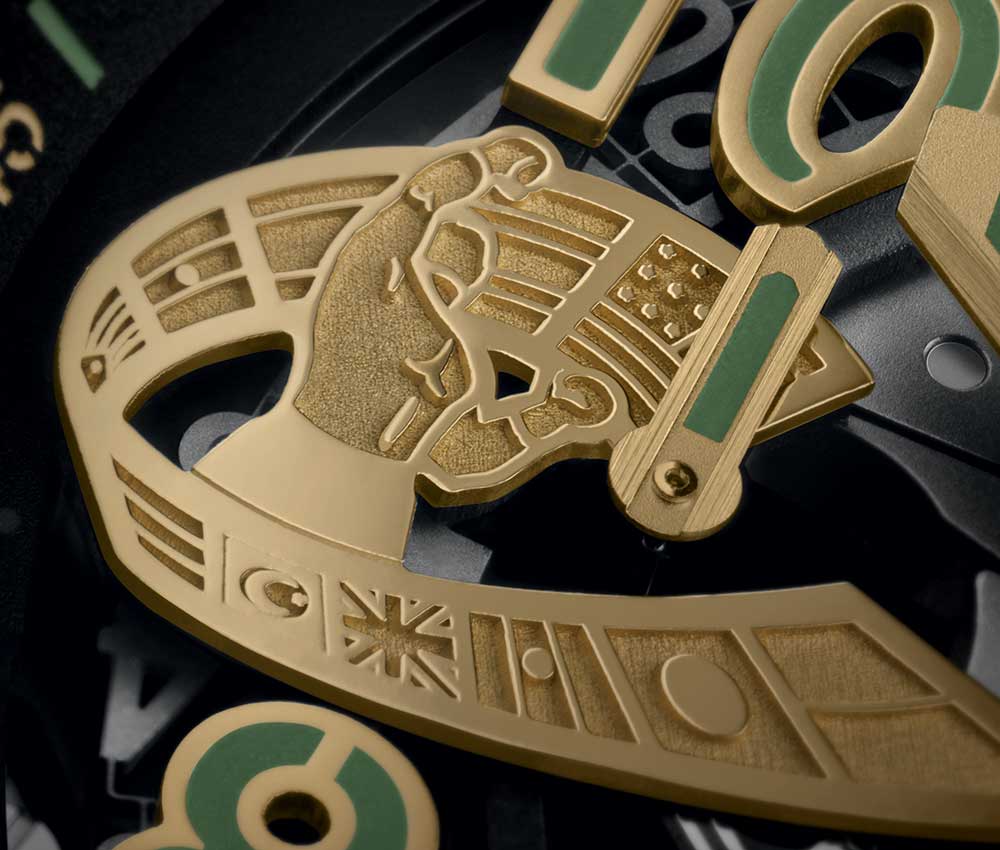 The Big Bang Unico WBC comes with a green alligator strap which is a nod to the belt awarded to a champion at the end of a world title fight. Hublot has also released its chronograph in a precious version limited to only 50 pieces in 18K King Gold.

The Grande Maison in Le Sentier is turning up the volume with this timepiece equipped with an ingenious system which clearly and qualitatively relays all the notes of its chimes.

With over 200 chiming watch calibers in its range, Jaeger-LeCoultre excels in the art of the minute repeater complication. With this wealth of knowledge, the brand is not resting on its laurels and is constantly innovating with great success. The new Master Grande Tradition Répétition Minutes Perpétuelle is a superb example. For this edition, a tone system produces the closest representation yet of the top notes and volume of old pocket watches. The acoustic quality is optimized thanks to an enlarged area in which the melodies can flourish. The thickness of the watch is around 13.72 mm. 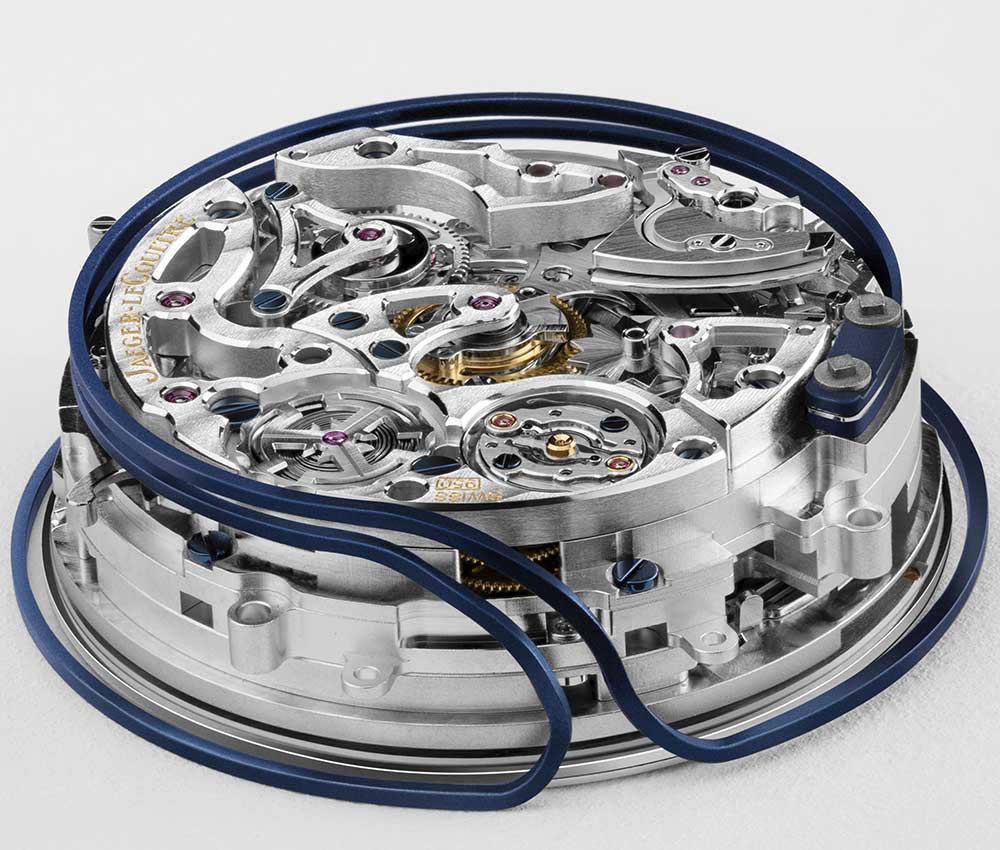 Two editions are available, each composed of 30 pieces. The first has a translucent dial in guilloched blue enamel. While the second has a silver grained finish.

Do you know all the ins and outs of cycling and the Tour de France? Tissot is offering you two special editions in the colors of the world’s media-friendly cycling race.

From July 6 to 28, the most prestigious cycling race will take to the roads of France with the final stage along the Champs-Élysées. To follow the 21 stages of the trial in the best possible way, Tissot, the Official Timekeeper of the trial, is offering two timepieces in the colors of the event. This edition marks 100 years of the famous yellow jersey. For this occasion, the Chrono XL Tour de France 2019 Special Edition proudly bears the emblematic color on one of the counters on its dial. The design of the T-Race Cycling Tour de France 2019 Special Edition is inspired by that of a bicycle. The inter-horns and the hands are reminiscent of the forks of a competition two-wheeler while the pushers symbolize the brake levers. The graduated aluminum tachymeter bezel in kph and mph, set on a silicon ring, represents a wheel. The counters evoke the cogs of a race bike and the back of the strap imitates the chain. 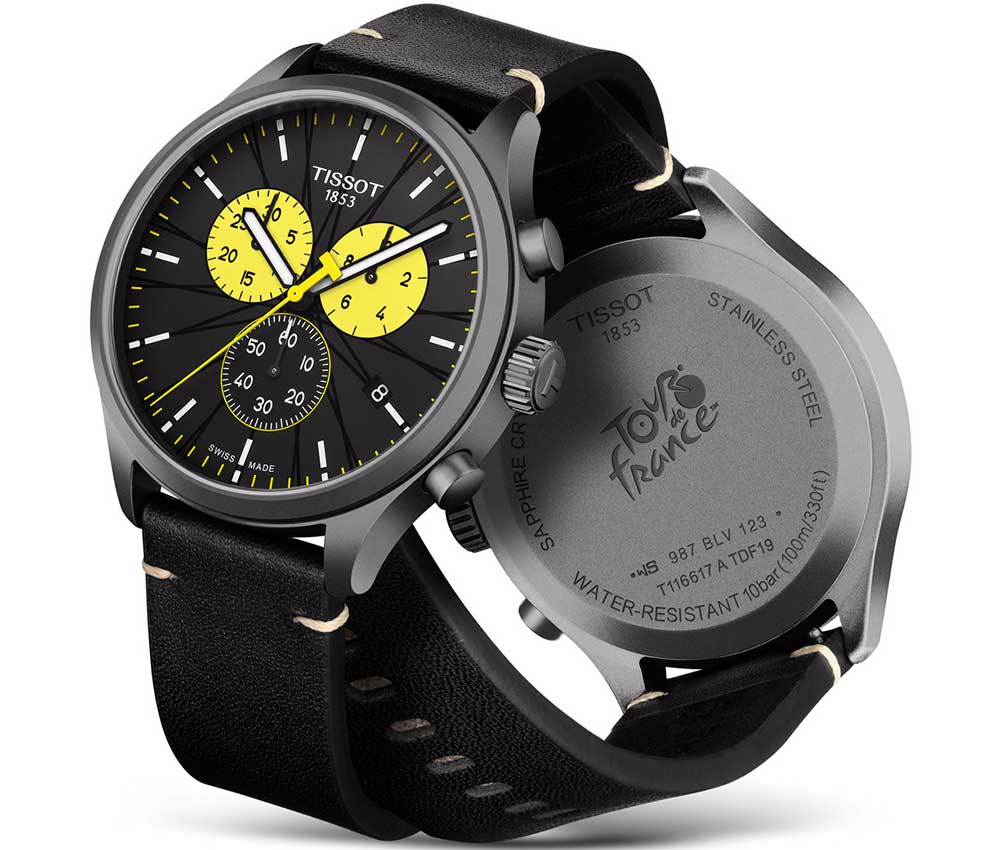 The Chrono XL comes in a commemorative box accompanied by two leather straps. The first all-black strap contrasts with the second which is decorated with yellow jerseys. As for the T-Race, it comes with a two-tone silicon strap.

The jury has reached its verdict and presented its awards. If there was one for accessories, this new glamorous limited edition would surely stand out.

The curtain has just come down on the Cannes Festival. Partner of the event since 1998, Chopard is now tempting us to climb the steps of the red carpet with a timepiece in colors inspired by the French Riviera. The L.U.C XPS Azur has a dial in summery blue hues reminiscent of the Mediterranean Sea. To achieve this, the dial has a delicate guilloched center with an emanating pattern combined with a sunburst satin finish. This work is magnified inside a 40 mm white gold case. In this subdued depiction, the stars of the show tell the time. The dauphine-type hour and minute hands point to an outer ring illuminated by baguette-cut diamond index markers. Far from being relegated as extras, the small seconds and the date both play their parts perfectly at 6 o’clock. 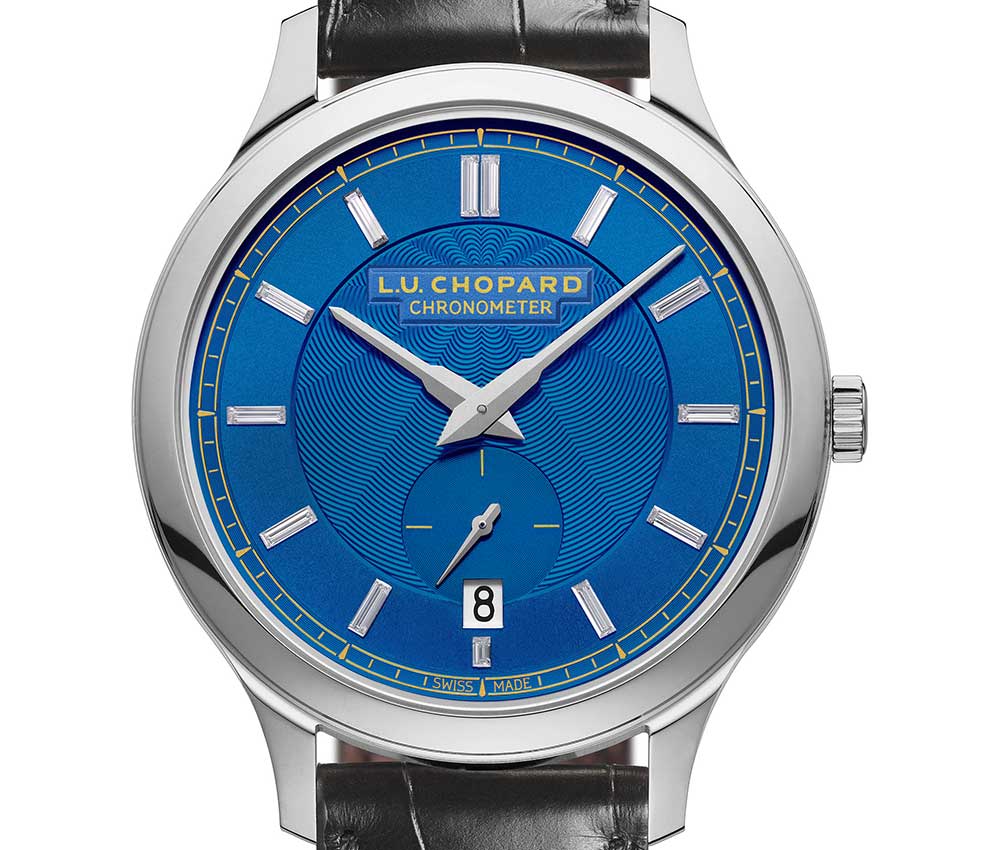 As with all Chopard watches, this very limited edition of just 10 pieces has the chronometer certification issued by the Swiss Official Chronometer Testing Institute (COSC). The L.U.C XPS Azur also bears the hallmark of the demanding Geneva Seal for its exemplary finishes.

In 1785, Pierre Jaquet-Droz (1721-1790) designed a pocket watch in a pared-down style which provided an unprecedented time display. On the dial, the hours and minutes were pushed to the back while the seconds were given pride of place, with everything forming the perfect loops of a figure of 8. The symbol of infinity and eternity, this masterpiece was reinterpreted by Jaquet Droz in the 2000s before becoming the face of the brand. With new complications added over the years, it now has a mono-pusher chronograph which demonstrates a technical and aesthetic feat in preserving the brand’s lucky number. The Grande Seconde Chronograph is available in two versions: the classic version with its ivory Grand Feu enamel dial and red gold case and a contemporary version with the 8 off center and a steel case. 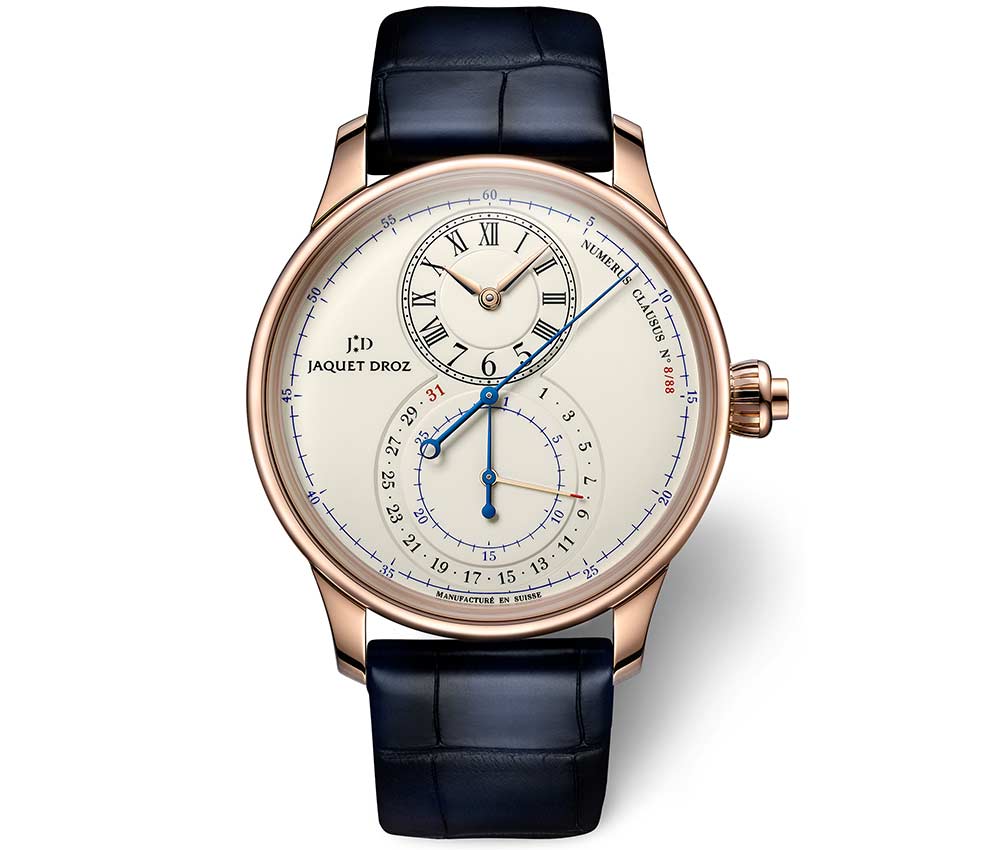 For the modern version, the sandblasted dial is offered in three shades – silver, blue, or taupe – highlighted with blued or rhodium-treated hands.

So as not to clutter the profile of the 43 mm case, the Grande Seconde Chronograph has a single push button to start, stop and reset the chronograph located in the crown at 3 or 4 o’clock.

Protecting the oceans also means exploring them. Breitling is offering new, simple, and robust editions to accompany you in all your underwater adventures. 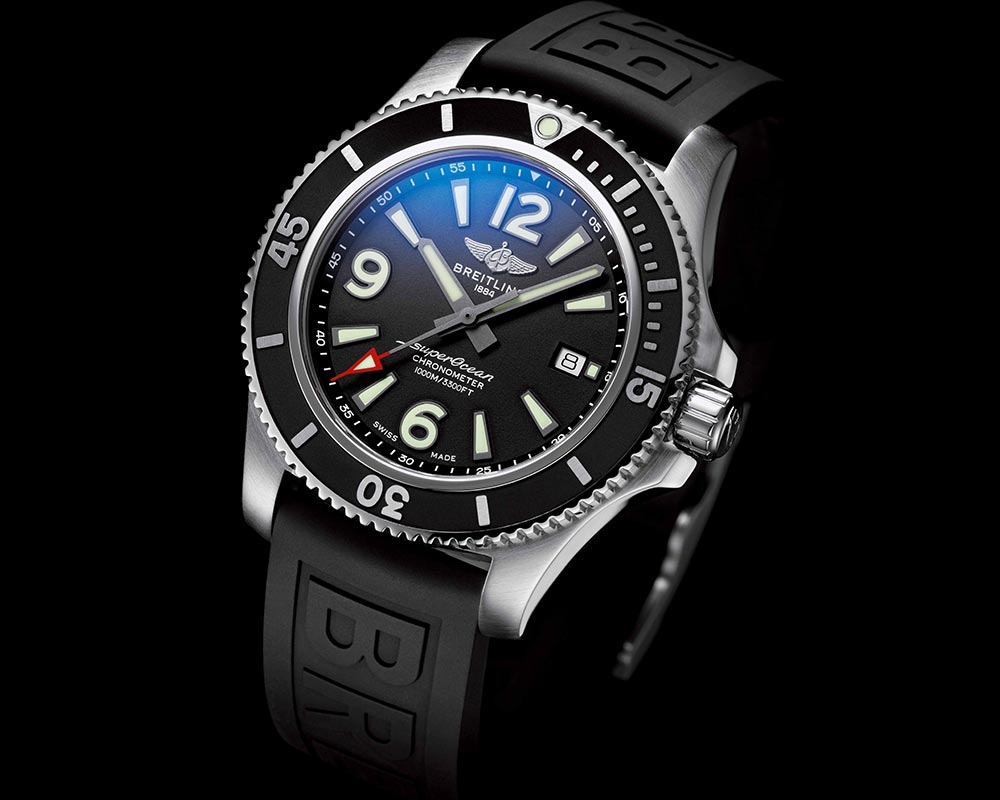 Depending on your needs, each edition has a specific water resistance. The Superocean 36 can withstand depths of up to 200 m, the 48 can go to 300 m, and the 42 reaches as far as 500 m below sea level. While the Superocean 44 and 46 can accompany extreme explorers with a water resistance of up to 1,000 and 2,000 m respectively. A Diver Pro II strap makes the watches comfortable to wear over a diving suit. Which one will you choose?