THE EXCEPTION THAT PROVES THE RULE

François-Paul Journe pays tribute to the history of watchmaking. The Tourbillon Souverain brings together tradition and innovation to the delight of collectors.

Until the 16th century, pocket watches told the time with a single hand that went around the dial in 12 hours. This lack of precision that couldn’t measure minutes ended when the watchmaker Jobst Bürgi invented the “remontoir d’égalité”. The balance wheel could beat regularly with the help of an ad hoc mechanism taking the required energy from the main spring. Countless watchmakers designed their own complex and tedious mechanisms for clocks and table clocks. F.P.Journe has designed a contemporary take on it to bring amazing timekeeping performance to the Tourbillon Souverain Calibre 1403. A dead-beat seconds has been added to the system for an even more accurate display. Basically, the hand doesn’t move until the second has passed. So instead of sliding, the seconds hand jumps on the dial. 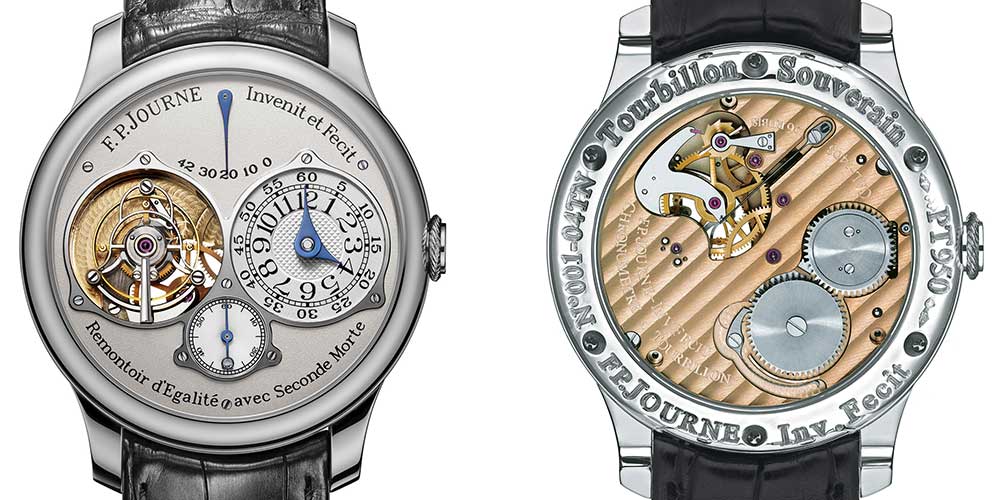 The manual-wind movement is made of rose gold. The dial’s display of the functions plays with the rules of geometry. The tourbillon at 9 visually echoes the hour and minute disc off-centre at 3. The 40-hour power reserve at 12 and small seconds at 6 create a perfectly symmetrical axis.

It has taken eight years to design the electromagnetic movement for F.P. Journe’s first ever ladies watch. The result is a lesson in design and technology! On the mother-of-pearl and luminescent dial there’s a mechanical motion detector at 5.30 which recognises when the watch is no longer being worn; the watch goes on standby after thirty minutes and automatically sets itself to the right time when it is back on the wrist. This unique technology is housed in the titanium Tortue case (34x35mm) with a rubber partition (available in 7 colours) and finished off with a diamond paved bezel. Large Arabic numerals and a slim minute track lie in the centre beneath blue-tone hands whilst the small seconds stands at 6 o’ clock on the dial. Price: 15’120 CHF

Despite popular (and usually incorrect) belief, you can combine intense sport and luxury watches. F.P. Journe is proving its point by bringing watch-enthusiast athletes a new model in its lineSport collection: the Octa Sport in grade 5 titanium. This lightweight and resistant piece in matt grey anthracite has a 42mm case and link bracelet. The dial and movement are both made of an aluminium alloy. The self-winding 1300.3 calibre inside the case provides a power reserve of approximately 120 hours (displayed at 10.30 on the dial) and brings to life the time (hours and minutes in the centre, small seconds at 6 o’ clock) and date functions (large date at 1 o’ clock) as well as the day/night indicator (display at 9 o’ clock). Luminescent hands and large Arabic numerals appear on the dial’s carbon surface. Price: 31,860 CHF (titanium bracelet) – 26,460 CHF (rubber strap)

Whether it’s the first or fourth time and no matter how brief, it’s always overwhelming to meet the singular watchmaker François-Paul Journe. We have nothing but admiration for this understated figure with thirty years of experience, several awards and world recognition. But what this enthusiast radiates above all is a unique watchmaking philosophy which goes into each piece that comes out of his Geneva workshops. 2014 pays tribute to this philosophy with the launch of the 10 Year Anniversary Tourbillon. François-Paul Journe’s watchmaking art is the beating heart of the 40mm platinum case: a rose gold manual wind tourbillon chronometer movement made in Geneva which brings to life the hours, minutes, seconds and 56-hour power reserve. The Roman and Arabic numerals with a white minute track on a dark silver display are showcased by a polished steel rim all on a silver grained dial. Price: 129’600CHF