Hamilton has launched a new version of one of its basic models equipped with an elegant case and available in two sizes suiting both men and women.

As the year draws to a close, the Boulton by Hamilton, a popular model from the 1940s, is making a comeback in the brand’s catalogue as part of the American Classic collection. The collection includes watches combining a style inspired by the company’s American roots along with Swiss movements. The previous models stood out, among other things, for the watch cases in highly individual shapes, half way between a rectangle and a tonneau (barrel) shape. For this new model, the case is made of steel and has the same curves as the original. It houses a slightly redesigned silvery white dial beneath a bevelled sapphire glass. Stylised black Roman numeral have replaced the Arabic figures on the original. The watch hands are blue. 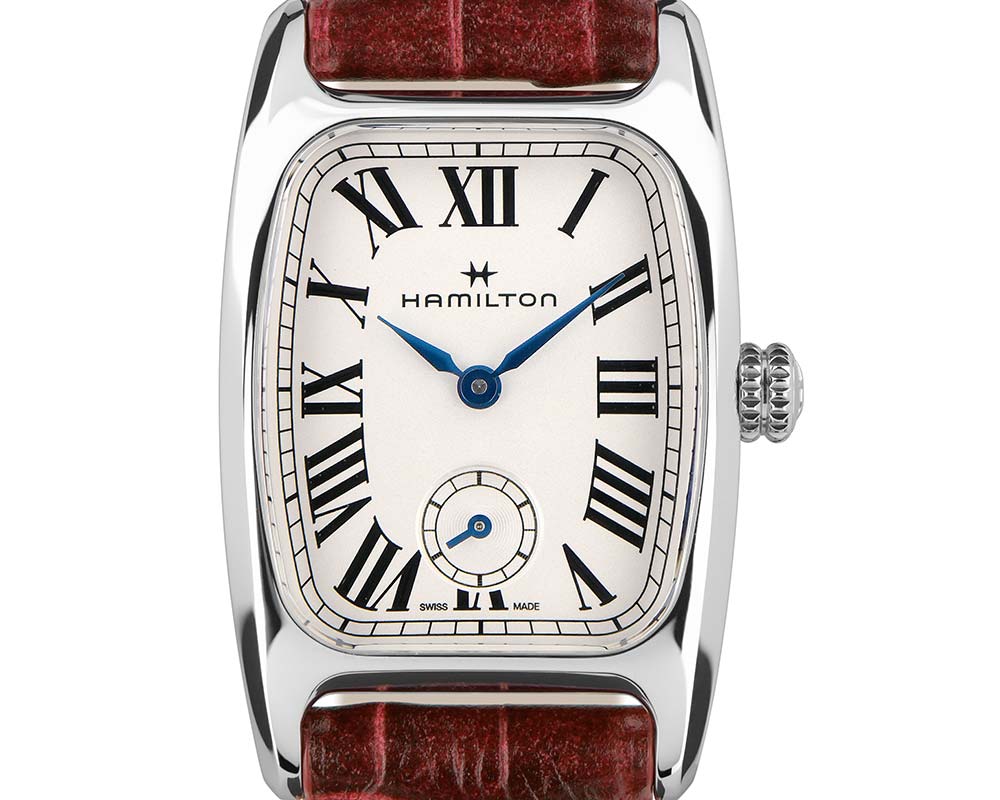 While the visual layout underlines the retro aspect of the watch, the small seconds sub-dial at 6 o’clock adds to its elegant look. Similarly, the choice of straps, rounded off by a tang buckle, reinforces the impression of timeless elegance. The calf leather straps are dressed in midnight blue, ruby red or mahogany brown. Thanks to the Easyclick system, it’s easy to change them to match your mood or style.

Unlike the 20th century models, the new watches are powered by a quartz movement.

The ever-up-to-the-minute military spirit continues to inspire the style codes of our watches. Rediscover it on the model which equipped generations of GIs and flaunt it on your wrist.

To make sure you stand out from the crowd, boast a camouflage design! Although soldiers wear clothes to conceal themselves in any zone of combat, the world of fashion has appropriated these well-known prints to provoke exactly the contrary. Watchmaking is no exception to this trend as showcased through the Khaki Field Camouflage models which Hamilton unveils this summer. This collection’s watches, which already stand out with their adventurous look and their rugged, rock-solid reliability underscored by their 42 mm-diameter stainless steel case, water-resistant to 100 metres, are perfectly attired to adapt to all environments of your everyday life. A myriad of combinations can be created with the dials proposed in khaki, clay-grey and black and the ardillon-buckle straps which come in khaki, camouflage green or sand camouflage textile. These timepieces can also be married with a stainless steel strap with folding clasp. 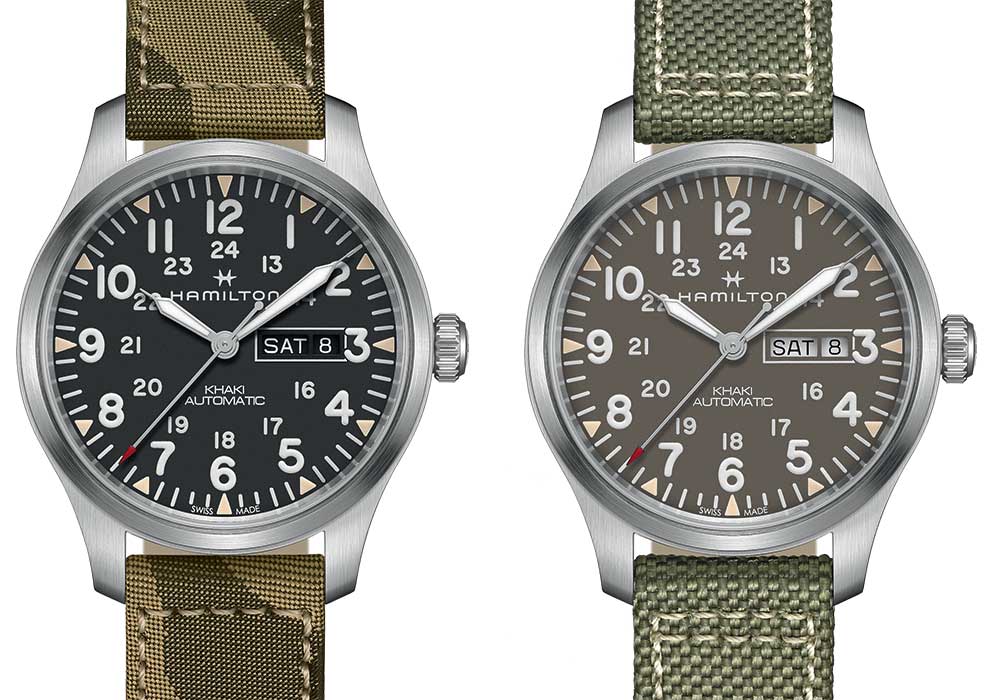 To ensure optimal time data legibility even during dusk-to-dawn celebrations, the large hour and minute hands are coated with white Super-LumiNova® and point to XL-size numerals. A double aperture at 3 o’clock displays the days and dates and complements this organization which is as sharp and shrewd as any commando.

These features are driven by the high performing H-30 calibre. This self-winding mechanical movement will enhance your style anytime, anywhere, thanks to its desirable 80-hour power reserve. The Khaki Field Camouflage will be your faithful wrist-companion.

The bond between the brand founded in 1892 and the American armed forces, which it officially supplied in the 1920s, is so strong that the watches coming out of the Bienne workshops are still imbued with the same military soul. Khaki is a brown/green colour and the name of a strong fabric; Field is where soldiers set forth. The combination of these two words has produced a sturdy timepiece. The 40mm steel case houses a self-winding H-10 calibre which brings all the functions to life and provides an 80-hour power reserve. The hours appear as white Arabic numerals on the khaki dial featuring a central 24-hour scale surrounded by a detailed minute track split into 5-minute sections. Two diamond-shape luminescent hands display the time whilst the seconds are tracked by a white-tipped hand. Price: 675 CHF

Some artists achieve immortality and live on in the memories of their fans. Among them is Elvis Presley, the King with a blues voice and swinging hips. The rock ‘n’ roll pioneer was also an actor who wore a Hamilton Ventura when he starred in Blue Hawaii (1961). January 8th 2015 would have been Elvis’ 80th birthday so to celebrate, the watch brand has unveiled a modern version of its classic timepiece. The triangular steel case is coated in black PVD (42.5×44.6mm) and houses a self-winding calibre which brings to life the time and date functions and the 80-hour power reserve. The minute track on the black dial is orange from 12 to 3 o’ clock then grey. Triangular luminescent hour and minute hands glide above with the orange central seconds. A date display with a white background lies at 3 o’ clock. Price: 1,425 CHF (self-winding)

Lightweight, pliable and inexpensive aluminium is much-used in certain sectors including transport and aeronautics. This silver-tone industrial metal is making more and more of an impact on the watchmaking sector as we can see with the Khaki Pilot Pioneer quartet. The 41mm aluminium case is available in 4 “military” colours: khaki green, commando black, navy blue and sand beige. Each has a matching dial and the same display: three polished or black lacquer hands in the centre track the hours, minutes and seconds in the form of indices and Arabic numerals surrounded by a 24 hour silver or black ring. A white date display lies at 3 o’ clock. The internal rotating bezel is set in motion by the pusher at 2 o’ clock. The time functions are brought to life by the self-winding H-10 movement which provides an 80-hour power reserve. Price: 1,050 CHF

We may well have been told how an automatic movement works but seeing it before our eyes is always a magical mechanical moment. Most modern watches have an open back to showcase the calibre inside but you need to take the watch off your wrist to see the show. Hamilton’s Jazzmaster Viewmatic has solved this problem with an openwork dial showcasing its skeleton movement. The movement in the 40mm steel case brings to life the hours, minutes and central seconds. The display in the middle of the dial is surrounded by two anthracite and grey rings bearing the brand name, model and minute track respectively. The hour indices overlap the rings and lie below three hands; the hour and minute hands and indices are all coated in LumiNova® for improved visibility in the dark. Price: 1,115 CHF

It was one of the biggest surprises at Baselworld 2014 so hat’s off to Hamilton, the most Swiss of American brands…or is it the other way round? We’re digressing. In terms of mechanism, this Khaki Takeoff Auto Chrono isn’t going to shake up the watchmaking world as it is fitted with an ETA self-winding chronograph which has been “customised” for the brand. But that’s not the most exciting thing about the watch. The best thing about this timepiece is the design which, to be blunt, is a knockout. It’s all about its bullhead case (crown and pushers at 12 o’ clock) and black PVD coating. The ingenious yet functional watch has multiple uses: the case clips onto a metallic base fitted onto the strap and is easily removed to be housed in a display or the cockpit on a plane or helicopter. Simply brilliant. Why didn’t anybody think of this before? It’s no wonder Air Zermatt’s pilots were so quick to get hold of the watch. The lucky devils! They’ve got a special version of it in their company colours. As for the rest of us aviation enthusiasts, you’ll have to be quick if you want to buy the Khaki Takeoff Auto Chrono: the series is limited to 1999 models. Prix: 2,995 CHF

The most American of Swiss brands is taking a trip back in time with its simply irresistible retro-chic Pan Europ model; just look at that tricolour striped fabric strap. Inspired by the original 1971 model, the 2014 version in a 42mm steel case is available in two colours: steel grey with a black or metallic blue rotating bezel and matching dial. Whichever colour you choose, both are surrounded by a white chapter ring featuring the indices and black minute track (red between 12 and 3 o’ clock). The central second hand adds another touch of red whilst the metal hour and minute hands are coated in Super LumiNova. A self-winding movement brings to life all the functions and the date (day and calendar) in a double display at 3 o’ clock. Price: 975 CHF