STICKING WITH THE BEAT

Fifteen years after it was first launched, the Tambour watch is still beating to the rhythm of time at Louis Vuitton with two new versions, dressed in black.

Louis Vuitton took its first steps in watchmaking with the Tambour model in 2002. Since then, and particularly through the acquisition of the Fabrique du Temps in 2011, the famous Parisian luxury brand has continued innovating and has broadened this collection of simple or sophisticated – but always attractive – models. What do they all have in common? A case with the same shape and the 12 letters of “Louis Vuitton” engraved around the circumference, like the 12 hours on the dial. The new Tambour All Black watches have kept this distinctive feature. Dressed in black, they combine a steel case with a black PVD coating and an elegant matt black dial. On the dial, the XXL-size anthracite V is a revised version of the Gaston-Louis Vuitton logo from 1901. The effect is to give the watches a strong sports and masculine feel. 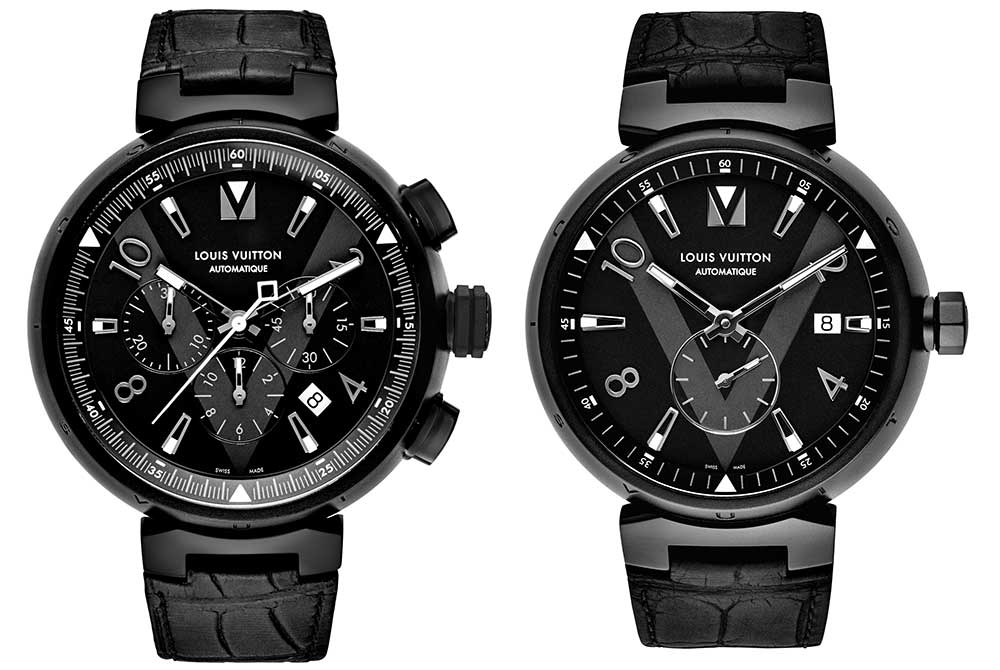 With these two timepieces, worn with an interchangeable coal black alligator strap, Louis Vuitton proclaims the current tendency: sport is the new chic!

THE CUBE ROUND DANCE

Seven years after inventing a new time display, the Parisian brand is renewing the experience with a titanium watch with a grey dial featuring twelve rotating cubes.

Why just show the time in a regular way when your name is Louis Vuitton and you have your own workshop (La Fabrique du Temps Louis Vuitton)? The Parisian brand, famous for its trunks and the LV monogram, has overturned the traditional codes with its new Escale Spin Time Blue model. The idea of a watch with spinning time was born with the Tambour Spin Time in 2010, but Louis Vuitton has revisited this system and included it in the Escale watch case. 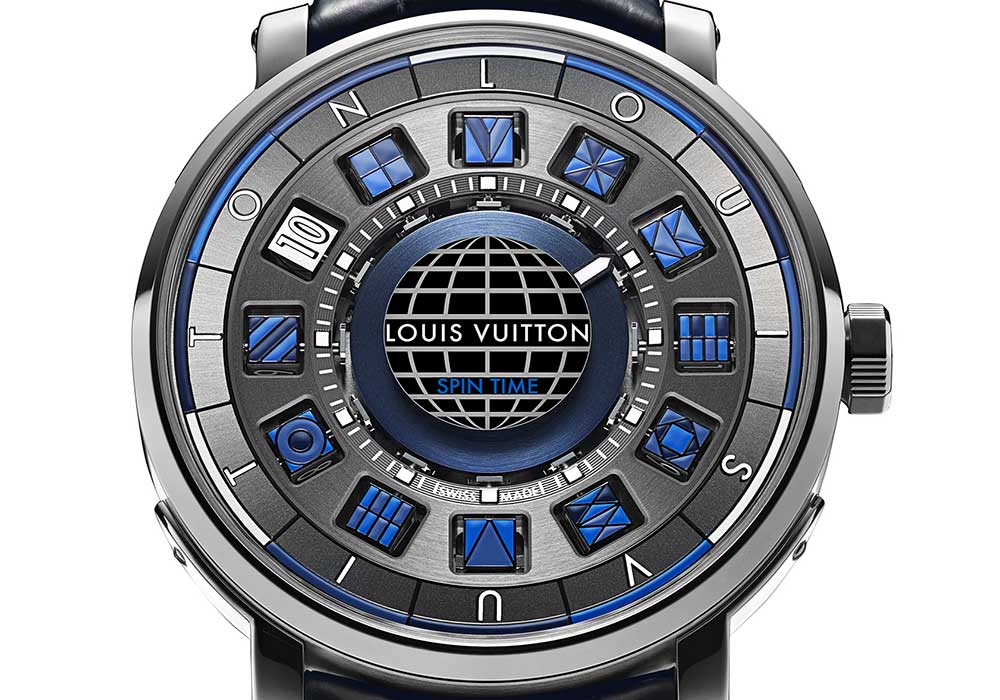 The Escale Spin Time Blue has a titanium case measuring 41mm in diameter and 11.2mm thick, and is adorned with a titanium crown, bezel and lugs. This silvery setting contains the LV77 calibre, an automatic mechanism made at La Fabrique du Temps Louis Vuitton, and drives the hour and minute functions, while providing a power reserve of 42 hours.

At the centre of the steel-grey watch face is a black and silver globe on a blue disc displaying the Parisian brand name. Under this stylised planet Earth is concealed a small luminescent hand displaying the minutes and a white minute track. The hours, meanwhile, are shown by 12 spinning cubes, each including four different faces, all made by transfer. Three tones of blue have been used for these very unusual hour markers.

The Escale Spin Time Blue has a navy blue alligator and calf-leather strap with a white gold buckle.

A capital V, the symbol of Parisian brand Louis Vuitton, lies in the heart of the new Voyager GMT dial. The silver, steel grey or rose gold V stands on a long bridge between 3 and 9 o’clock and its narrow tip tracks local time on a disc. A black and white or black and blue day/night indicator adds the finishing touch to the second time zone display.

The hours, minutes, central seconds (tracked by openwork luminescent hands) and GMT function are brought to life by a self-winding movement that fuels the 42-hour power reserve. The movement is designed in Switzerland and lies in a 41.5mm curvy square case in steel or rose gold.

The watch comes in three dial colours: silver or anthracite on the street smart steel models or navy on the rose gold case. 8 domed rectangular markers dot the dial with a V at 12.

The Parisian brand has been an expert in the art of travel for over 160 years. Louis Vuitton’s famous trunks first appeared in 1854 and were sold in the shop near Place Vendôme. A love of travel and adventure oozes from the brand’s contemporary timepieces including the colourful Escale Time Zone. The dial is divided into several concentric rings and features a black disc with pale stripes with a triangular hour hand and rectangular minute hand. The hands track a monochrome ring bearing the 24-hour scale which can be adjusted using the crown. The dial has been hand-engraved with initials of the cities, strips and patterns of colour reminiscent of the personal inscriptions on the trunks; they depict 24 time zones or divisions as determined by the International Meridian Conference in 1884. Price: 6,650 CHF

In 1896, 42 years after the brand was founded, Georges Vuitton designed the famous monogram bearing his father Louis’ initials. It has since become world famous as the brand’s signature. The V in LV which features on this summer’s Speedy 30 bag also appears in the ready-to-wear collection by creative director Nicolas Ghesquière to form a chevron pattern which you can see on the openwork knit dresses. The watch take on the pattern has a dial zigzagged with 222 diamonds and a hypnotic red and black miniature painting. The dazzling dial features two leaf-shape silver hands to track the hours and minutes which are brought to life by a quartz movement in the gleaming white gold case glittering with 46 diamonds. Two black or red lizard and diamond buckle straps wrap the timepiece around your wrist. Price upon request

Since trunk maker Louis Vuitton first started in the 1830s, travel has always been integral to the brand. Journeys were long, packing was labour intensive and trunks were well-filled in the 19th century. The Parisian brand’s signature trunks still exist today alongside suitcases and large travel bags such as the Keepall. Travel light and travel smart, just like the Tambour which puts a second time zone and chronograph on a single dial. A self-winding LV158 calibre nestles inside the 44mm steel case. The dial gleams with different shades of grey divided into concentric circles. From the chapter ring to the centre there’s a minute track, a 24-hour graduated ring beneath a red-tipped hand (GMT) then an hour rim overlapped by the small seconds counter (at 3) and the chronograph minute counter (at 9). Price: 7,800 CHF