CELEBRATING ITS 20TH WITH A TRIP

The Chopard factory in Fleurier is celebrating its 20th anniversary with a steel model for stylish globetrotters.

1996 saw visionary co-president Karl-Friedrich Scheufele open Chopard’s new factory in Fleurier in the Jura municipality of Val-de-Travers. Its foundation brought a new watch collection in tribute to the past using the founder’s initials, Louis-Ulysse Chopard. L.U.C is the epitome of watchmaking as seen by Karl-Friedrich Scheufele: clean lines and fantastic functions. For its 20th anniversary the collection was given a new complication that’s popular among travellers: L.U.C GMT One.

When you think of a second time zone you always think it’s a complication that’s hard to set but that’s not at all true of the L.U.C GMT One. The dial displays are easy to read and two crowns on the 42mm steel case make setting it a breeze: date and local time at 2 and home time at 4. 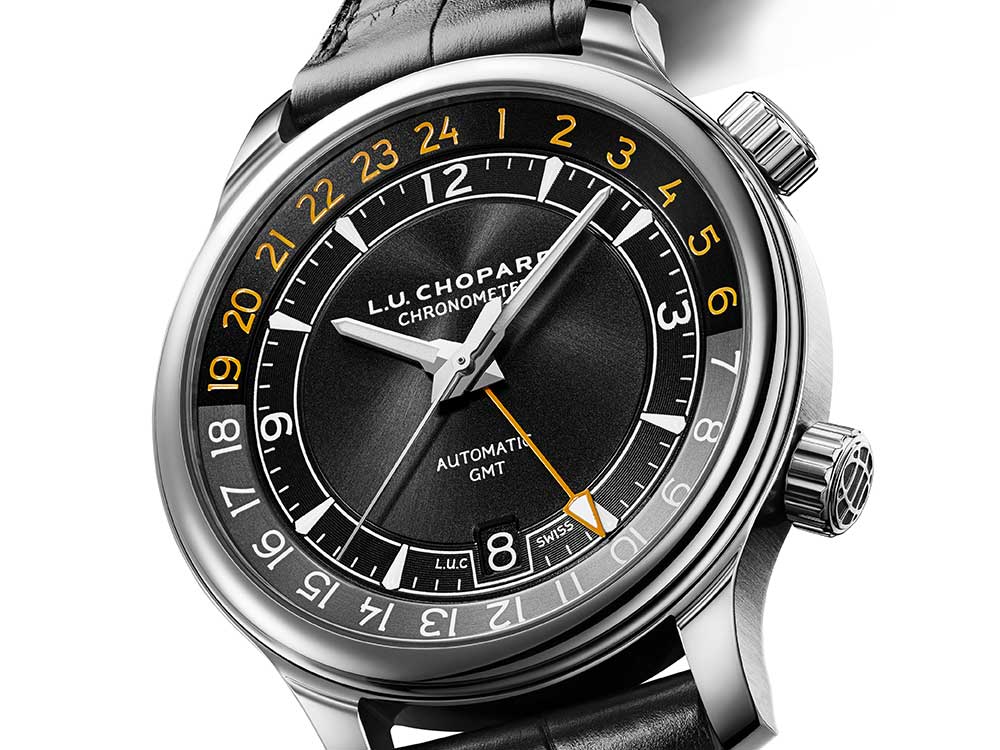 The black sunburst dial is surrounded by a black ring bearing cone-shaped markers and Arabic numerals coated in white Super-LumiNova. Four hands appear in the centre: dauphine-shape local hour and minute hands, baton-shape orange central seconds and a luminescent tip for home time. Home time appears on a wide two-tone sunken chapter ring similar to the 24-hour indicator: a slate slab displays the time in white between 6.30am and 6.30pm and a black one features “night time” (6.30pm-6.30am) with orange figures. A date display at 6 completes the picture.

The L.U.C GMT One is fuelled by the new L.U.C 01-10-L calibre made by Chopard and certified by the COSC. The powerful self-winding movement provides a 60-hour power reserve which is handy for globetrotters who spend hours flying.