A FUSION OF SWISS EXPERTISE

Masters in the art of melding materials, Hublot is now going further in this direction and merging three different worlds into one. Or rather two: a chronograph and a three-hand watch.

Each new piece made by Hublot comes as a surprise, since the Nyon-based watchmakers can generally be found where you least expect them. And on this occasion, it was on the heights of Zermatt, the chic Valais ski resort in Switzerland, facing the impressive Matterhorn, that Hublot introduced two new watches in the Big Bang collection. Named the Big Bang Sugar Skull – sounding something like the name of a rock group – they are both similar and different, but each represents a blend of three typically Swiss worlds: watchmaking, skiing and embroidery – a trio sharing the same three values of passion, patience and performance. 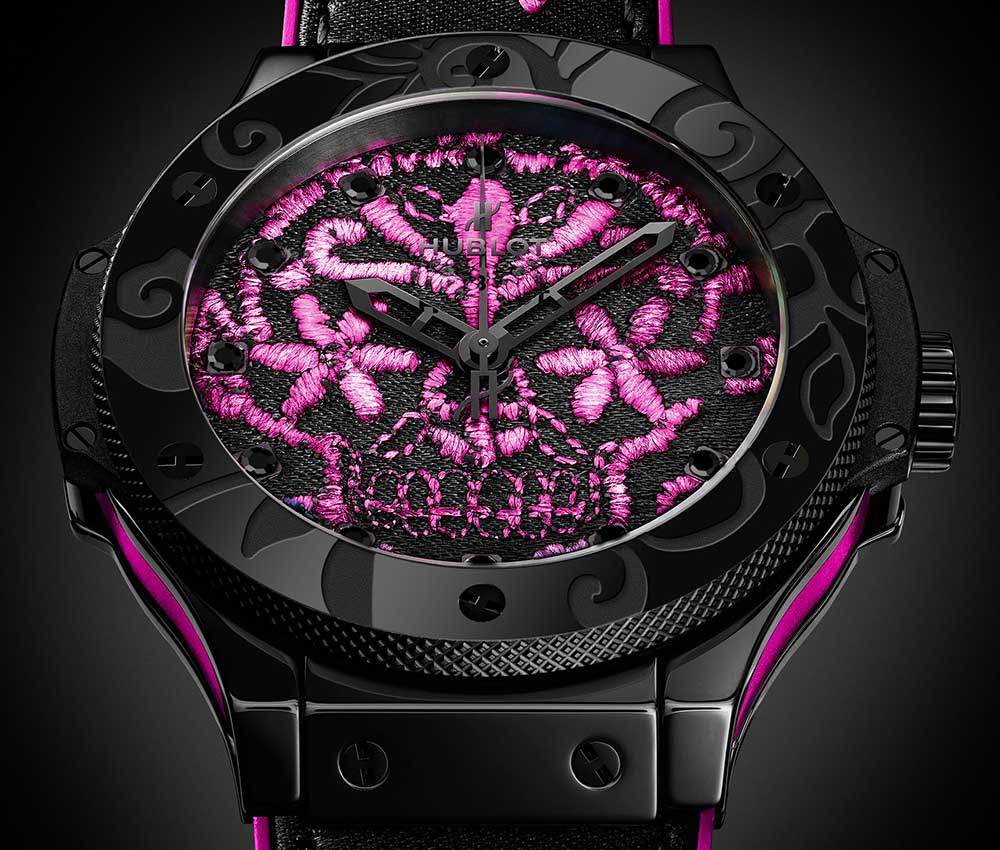 The second watch presented by Hublot, the Big Bang Sugar Skull Blue Cobalt, is a black chronograph tinted in electric blue. The dial also shows a polished skull adorned with climbing plants. But unlike the previous model, the black disc reveals the self-winding movement, the HUB4214 calibre, which drives the hour functions (the hours and minutes at the centre of the dial and the seconds at 9 o’clock), the calendar function (the date at 4.30) and the chronograph (seconds at the centre and the minute counter at 3 o’clock). The whole mechanism is housed in a solid case measuring 44mm in diameter and 14.70mm thick, made of black micro-beaded ceramics.

Both the Big Bang Sugar Skull watches have been made in 50 pieces, and have been designed in collaboration with AK, the ski brand founded by Aldo Kuonen in 1996, and later taken over by his children Francesca and Marco. AK is famous for its sturdy skis made in limited quantities, and manufactured in layers of wood, rubber, steel, fibre glass and carbon. A blend of materials that is similar to the fusion that Hublot has been carrying out for years on its timepieces. Each Big Bang Sugar Skull comes with a pair of black AK skis, decorated with the watchmaker’s logo and the famous flowered calavera.