BRONZE AND CHAMPAGNE: A SPARKLING MARRIAGE

With this limited edition, the Hamburg-based company pays a triple homage: to its 110th anniversary, the 158th anniversary of Minerva and the military watches of the 1930s.

The history of the Minerva workshop is without doubt one of the finest stories in contemporary watchmaking. Founded in 1858 in Villeret in Bernese Jura, the workshop, specialised in timekeeping, was only renamed Minerva in 1929, before becoming part of the Richemont group in 2006 and being allocated to Montblanc in 2007. The brand with the white star, which began to make watches in 1997, was inspired by Minerva’s famous 19/9CH calibre with the monopusher chronograph feature, created in the 1920s, and by the design of the military watches made at the Villeret plant in the 1930s, to produce the 1858 Chronograph Tachymeter Limited Edition model. And to highlight the vintage spirit of this special timepiece, available in 100 pieces, Montblanc has adorned it with bronze armour. 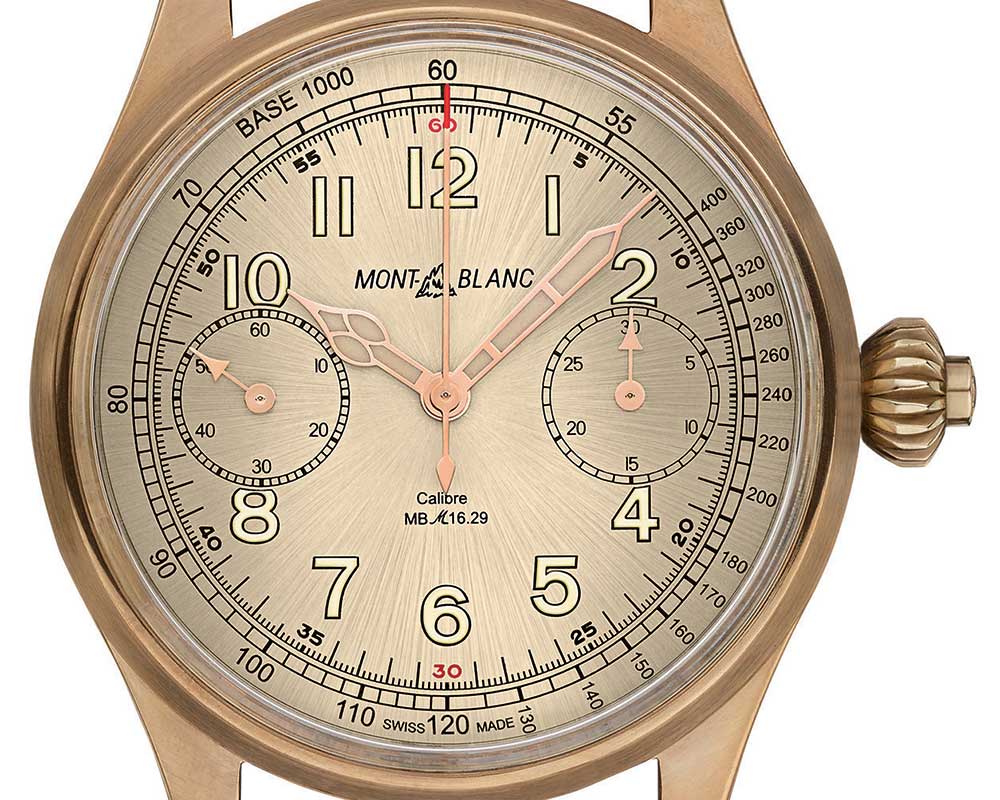 In fact, for the first time in the Hamburg firm’s history, bronze – an alloy of copper (60 to 90%), pewter and other metals (aluminium, lead, etc.) – with its golden-brown reflections has made its appearance to dress the 44mm-diameter case. Resulting from a special alloy, its patina has been developed, controlled and unified over time. To limit the risk of skin allergies, the case back of the 1858 Chronograph Tachymeter Limited Edition is sealed with a bronze-tinted titanium ring to reveal the sublime works powering the watch. The manual wind MB M.1629 calibre drives the hour and chronograph functions while providing 50 hours of power reserve.

Another detail giving this watch a retro look is the dial. With a champagne colour, golden tints and a sunbeam finish, it hosts at its centre two large copper cathedral-type hands coated in sand-coloured Super-LumiNova®. The hours and minutes are embodied in beige, luminescent Arabic figures, while a precise minute track is traced in black. A “chemin de fer” tachymeter scale is placed towards the chapter ring. Two counters, at 9 and 3 o’clock, show the second and minute timers respectively, while in the centre the seconds are shown with a red-tipped second hand.

The 1858 Chronograph Tachymeter Limited Edition comes with a hazelnut-coloured alligator strap with ecru white stitching, designed in the Florentine leather workshops of Montblanc.