The reissuing of a 1965 piece presented in 2015 continues to expand, and is becoming a collection of Oris watches in its own right

Just as fashion often moves in cycles, so watch-making likes to go back in time and take up old models from their archives to make them into what they call vintage. Vintage has already been talked about for several years, and what with real vintage, vintage inspiration, neo-vintage, retro-vintage, old-school vintage, and so on, it all gets a bit confusing… In 2015, Oris reissued their first dive watch that originally dated from 1965, but it was not a case of making a “fake antique”, but rather retaining the essential from the original style while giving the model a contemporary motor. In view of the successful Divers Sixty-Five presented last year, the company decided to make a collection of them, which currently includes dials in six different colours: black and yellow, blue and yellow, navy blue, British racing green and – new this Autumn – silver grey. 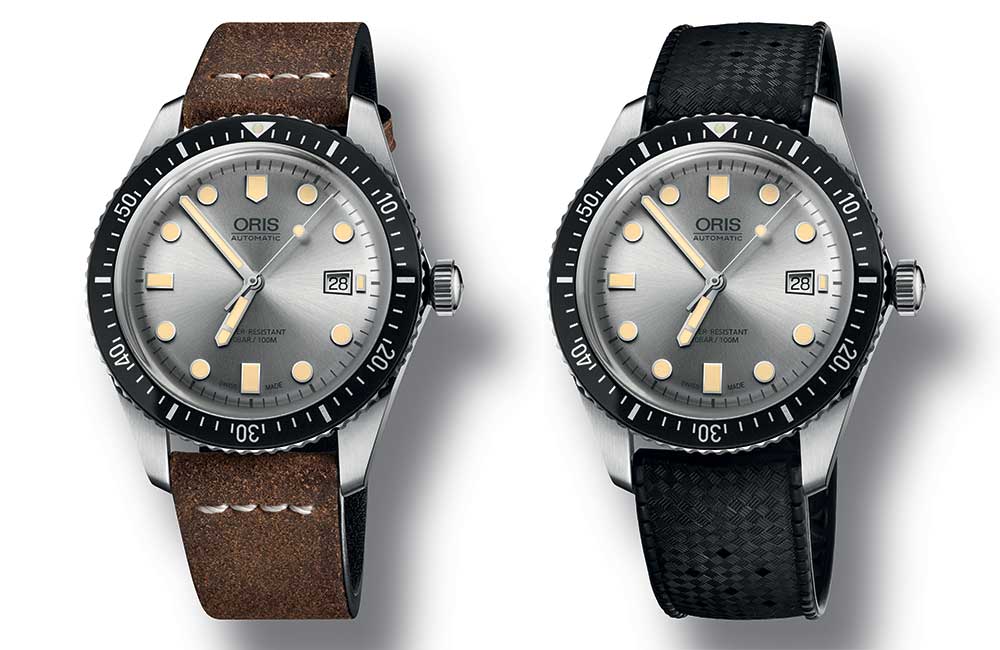 The diameter of the steel case has been adapted to present-day tastes and now measures 42mm. Its waterproofing remains the same, and the Divers Sixty-Five can withstand being immersed in water up to 100m deep. In addition, the screwdown case back is solid, and decorated with the 1965 version of the Oris crest, which is slightly different from the current logo. Like its predecessor, the Divers Sixty-Five is topped with a rotating bezel with a black aluminium ring on which the minute scale is inscribed, with silver numerals and markers and a luminescent indicator in the form of a yellow pea.

On the domed, silver dial with its sunray finishing, the minute track extends unobtrusively towards the chapter ring. The hour rim is composed of vanilla-yellow markers – different, geometric shapes – while the Oris shield appears in the 12 o’clock position. In the centre, two baton-shaped hands in nickel coated with Super-LumiNova® display the hours and minutes, while a seconds hand marked with a yellow pea shows the seconds. The date appears in a trapezoid-shaped display, rimmed with black, in the 3 o’clock position.

The different functions of this Divers Sixty-Five are powered by a self-winding movement, the Oris 733 calibre, mounted on a Sellita SW200-1 base, which gives a 38-hour power reserve.

Three straps are available with this new version of the Divers Sixty-Five with a silver dial: old Havana-brown leather to complete the vintage look of the watch, black rubber stamped with a chevron motif to give a sporty look, or a steel bracelet with three rows of links.