To celebrate its 280th anniversary, the watchmaker-magician from La Chaux-de-Fonds has brought together all the skills to be found in its workshops to create a unique piece with a precious and delicate illustration of a family of parrots.

The art of enchantment has undeniably been the main talent of Jaquet Droz for the past 280 years. The brand with headquarters in La Chaux-de-Fonds in Switzerland rose to fame thanks to the genius of its founder Pierre Jaquet-Droz (1721-1790) and particularly to his work on automata in the 1730s and 1740s – above all, the famous trio of the Writer, the Draughtsman and the Musician in 1774. Above and beyond the technical skills involved in each item produced by the company, the driving force behind Jaquet Droz is something simple and sincere: emotion. From the small workshop opened by Pierre Jaquet-Droz in 1738 to the firm we know today, the aim has been a wish to surprise, to enchant, to speak directly to the heart, like in the masterpiece made for the 280th anniversary, the Parrot Repeater Pocket Watch. 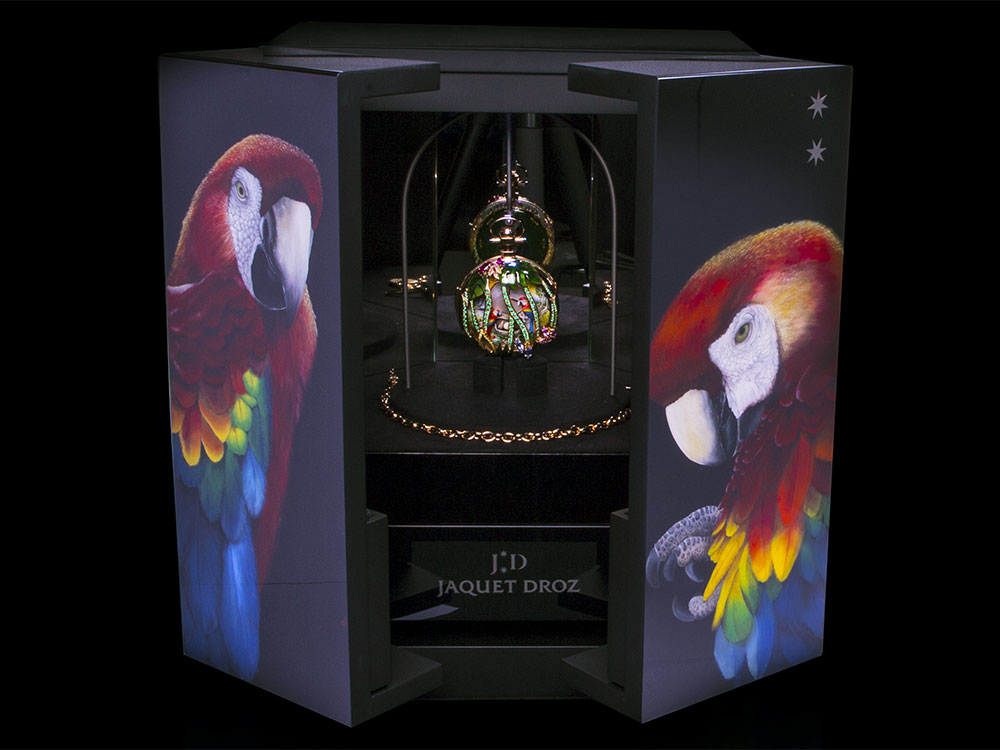 The 56mm-wide red-gold case made up of two covers has been sculpted, painted, covered in “Grand Feu” enamel and coated in a rainbow of precious stones (yellow diamonds, rubies, emeralds and pink, yellow and blue sapphires). It houses the calibre RMA88, a hand-wound mechanical movement driving the hours and minutes on the off-centred mother-of-pearl dial and providing 48 hours of power reserve. The double minute repeater that rings on the hour, quarter of an hour and each minute, and the automata bringing life to the family of parrots, is activated using a pull-out piece placed at 9 o’clock on the side of the case.