The Brassus factory presents the last watchmaking jewel of the “diamond” trilogy, the first one of which was born in 2015. It is a great, glittering, glamorous way to start the year, and to pay homage to the wild landscapes of their native area.

Two years ago, in 2015, Audemars Piguet began a new story in three chapters, with the creation that was part-watch and part-jewellery, and a fascinating design: Diamond Punk, a piece covered in diamonds, as its name suggests. The following year, in 2016, the Brassus factory continued this precious adventure with Diamond Fury, again covered in precious stones, and in 2017, they are concluding this trilogy with a spectacular “secret” cuff watch called Diamond Outrage. 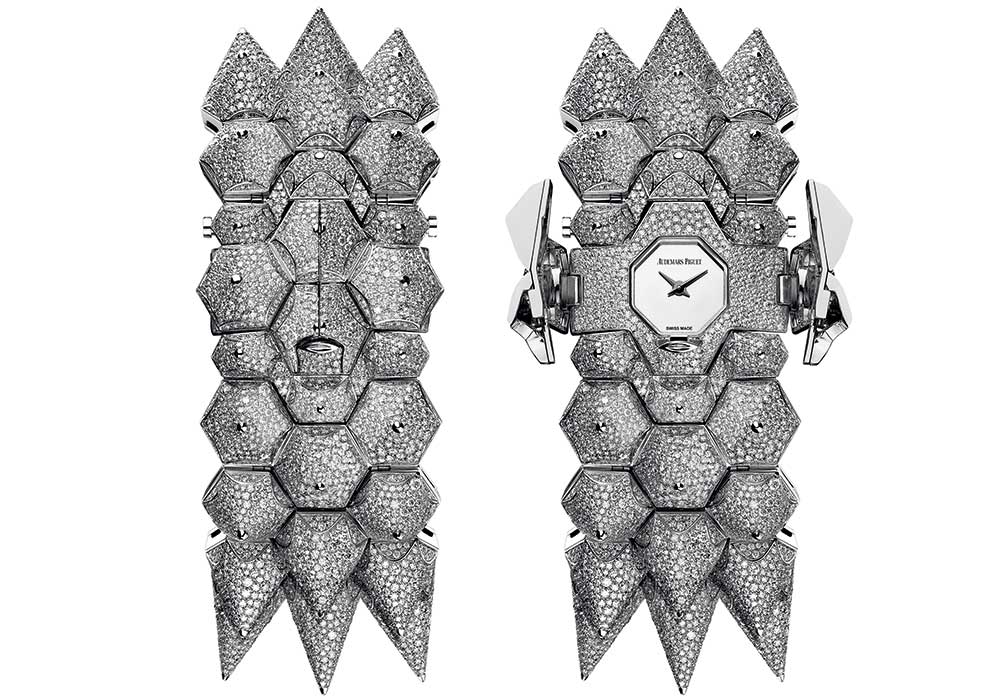 To design Diamond Outrage, Audemars Piguet drew on their immediate surroundings: their native village of Brassus, in the heart of the Joux Valley in the Swiss Jura massif. The wild power of the landscape in the region known as the “Vaud Siberia”, and its pine forests with their tops covered with winter snow standing on the hillsides, obviously served as inspiration for the creation of a watch completely out of the ordinary, a unique piece that has more than 10,000 precious stones spread over the surface of its case.

Diamond Outrage is made up of a white gold case attached to a bracelet that is also made of white gold, both of which are completely covered with precious stones. The wild spirit of the Joux Valley is translated into a multitude of cones of different heights, ranging from 29 to 40mm. These “peaks”, like jewelled stalactites, are covered with 9,923 brilliant-cut diamonds (50.06 carats) placed using the snow-setting technique, and 354 baguette-cut diamonds (15.85 carats), embedded invisibly. Beneath this cloak of precious stones hides a mirror-polished dial where two little dauphine-shaped hour and minute hands glide, operated by the 2701 quartz movement.

There is a bluish-white version of the Diamond Outrage model which offers a case bristling with cones covered with 11,043 brilliant-cut sapphires (65.47 carats).