THE MOON ON A MOTHER-OF-PEARL AND DIAMOND BED

Harry Winston, “the diamond king“, strikes again! This time, he has created a miniature version of the queen of the night with its iridescent reflections, to bring a thousand sparkling lights to the most elegant wrists.

Since time immemorial, the moon and its vast silver disc has fascinated mankind. Untameable, it wanders across black-blue starry skies, modestly displaying its different moods. Sometimes impressive and full, sometimes discreetly waxing, the queen of the night goes through multiple phases, and each lunation – that is, the period between two new cycles – lasts about 29.5 days. For the greater pleasure of the most romantic among us, whose loved ones want to give us the moon as a gift, Harry Winston has captured the essence of the Earth’s only natural satellite and placed it in a timepiece, the Midnight Date Moon Phase Automatic. 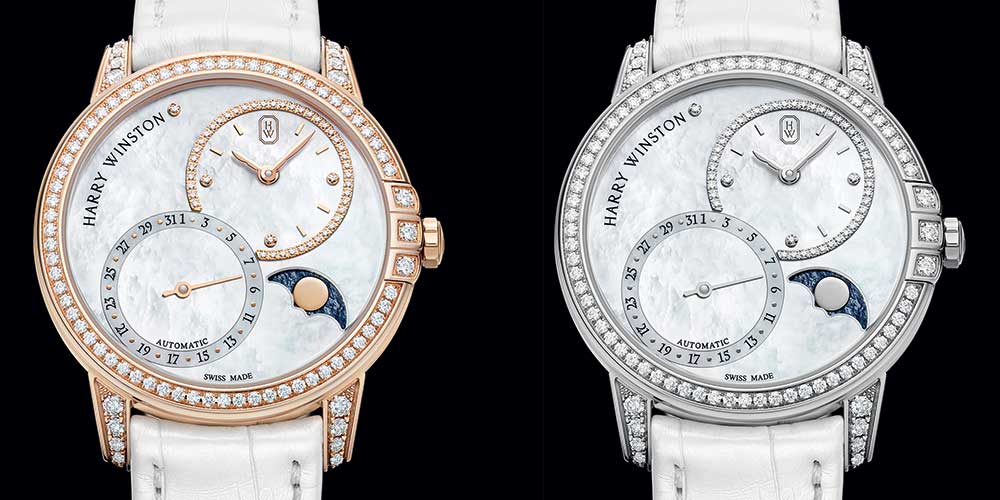 The Midnight Date Moon Phase Automatic model has a 36mm case and is available in two versions, one in pink gold, and the other in white gold, and adorns the wrist with the help of a white alligator strap with an ardillon buckle set with precious stones. The bezel and the lugs extending from it are studded with 83 brilliant-cut diamonds. They are matched by a trio of gems placed on the famous triple arch at 3 o’clock, evoking the entrance-way of the Harry Winston boutique in New York.

With its sapphire crystal, the case back reveals the HW3205 calibre, a self-winding mechanism providing 68 hours of power reserve. The calibre drives the functions and the hour, minute, second and moon phase displays.

The dial on the Midnight Date Moon Phase Automatic model consists of a white mother-of-pearl disc, on top of which two interlaced circles are set to show the double bow of a precious 8. The first circle, highlighted by a ring set with 43 brilliant-cut diamonds, shows the hours and minutes with hands moving across an hour rim with rectangular indexes and three gemstones (at 3, 6 and 9 o’clock). The second circle is a date counter with a hand and a ring, and with figures to show the odd numbers and silver or golden dots for the even numbers. But the star of the dial is at 4 o’clock in a bevelled display of a crescent moon: the queen of the night, in all its splendour, embodied in a pink gold or white gold disc against a galvanic blue mother-of-pearl background. Last but not least, a diamond rounds off the Harry Winston logo, which stretches round the chapter ring in the upper part of the dial.