THE KING OF MADE-TO-MEASURE

The watchmaker from Nyon, in the canton of Vaud, unveils its third joint project since 2014 with the Italia Independent brand, founded by Lapo Elkan, dressing its Classic Fusion chronograph with precious fabrics made in Italy.

Since the great speciality of Hublot is the art of fusion, it is not surprising to see some of its watch creations spiced with absolutely original touches, especially in such a “calibrated” field – if you’ll excuse the pun – as watchmaking. After stained glass and embroidery, to mention just two of Hublot’s slightly zany creations, the watchmakers from Nyon have called in Italia Independent to dress the dial of its Classic Fusion watch.

This limited-edition collection of six watches named Classic Fusion Italia Independent is the third joint partnership between the watchmakers and the firm founded in 2007 by the Italian Lapo Elkann, the king of made-to-measure. The two previous creations from the partnership between the two brands since 2014 adorned a more rock’n’roll model, the Big Bang Unico, and now it is the turn of the Classic Fusion family to benefit from the limitless creativity of Lapo Elkann.

As the well-dressed Italian businessman, aged just 39, is famous for his elegance and unique way of matching his car with his clothes, it was quite natural for him to call in the Italian tailor, Rubinacci, whose clothes he himself wears, to complete this partnership with Hublot. Among the 60 000 m² of precious fabrics kept in the dressmaking workshops of the sortoria, Lapo Elkann and Italia Independent have chosen six tartan and check fabrics with light wool materials and often bright colours. 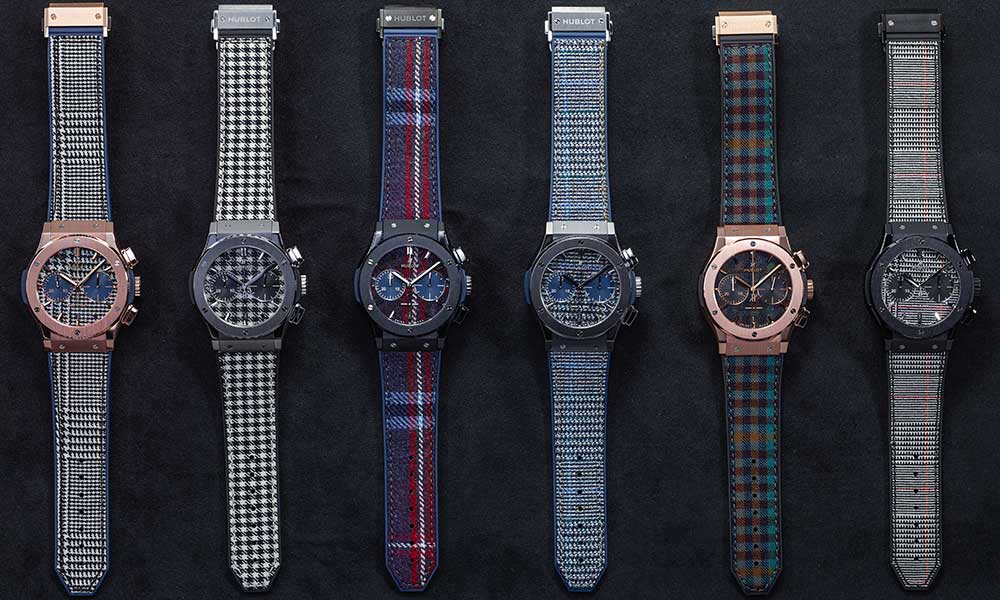 Each tartan or Prince-of-Wales check fabric now adorns the dial of a new Classic Fusion Italia Independent watch. This is a painstaking and perilous exercise, since a watch dial has a relatively small disc and textiles have a tendency to slacken over time.

This textile decor is adorned with an hour rim made up of silver or gold applied indices, depending on the model. Hours and minutes are displayed in the centre with two stick-type hands matching the hour markers, while the seconds tick away in one of the two blue-black or blue counters at 3 o’clock. The chronograph function, meanwhile, includes a central second hand equipped with a counterweight featuring the watchmaker’s logo, while the minutes are shown in a counter at 9 o’clock. The date is discreet and is coloured white against a black background inside a window at 6 o’clock.

The solid case of the chronograph is 45mm in diameter and 13 mm thick, and is available in three different materials, highlighted by reinforcements on the sides made of black or blue composite resin – titanium, black ceramics or King Gold, the famous pink gold developed by Hublot. The case contains the calibre HUB1143, an automatic mechanical movement, beating at a frequency of 28 000 vibrations an hour (4Hz) and providing 42 hours of power reserve.

Each strap is, of course, made of the same fabric as the dial and reinforced with coloured rubber.