Following the models depicting autumn and winter, Jaquet Droz unveils two new handcrafted timepieces that exalt the beauty of spring and herald the arrival of summer.

When you leave Paris, London, or any other major European city, to come and live in Switzerland, the first thing that hits you is the change of seasons. It is much more noticeable and nature reflects each of these changes with orange hues cloaking the trees in September and the pink and lilac-tinted evening skies in summer. When you hike in the mountains or walk along the banks of a lake, you see bright and colourful flora and fauna. This blooming nature resounding to birdsong that we enjoy today, went hand in hand with Pierre Jaquet-Droz, the founder of the eponymously-named watchmaker, back in the 18th century. Nature was more than just a companion to the watchmaker, it was a muse and an inexhaustible source of inspiration. The Jaquet Droz brand pays tribute to this love of nature with two stunningly beautiful timepieces: Petite Heure Minute Seasons. 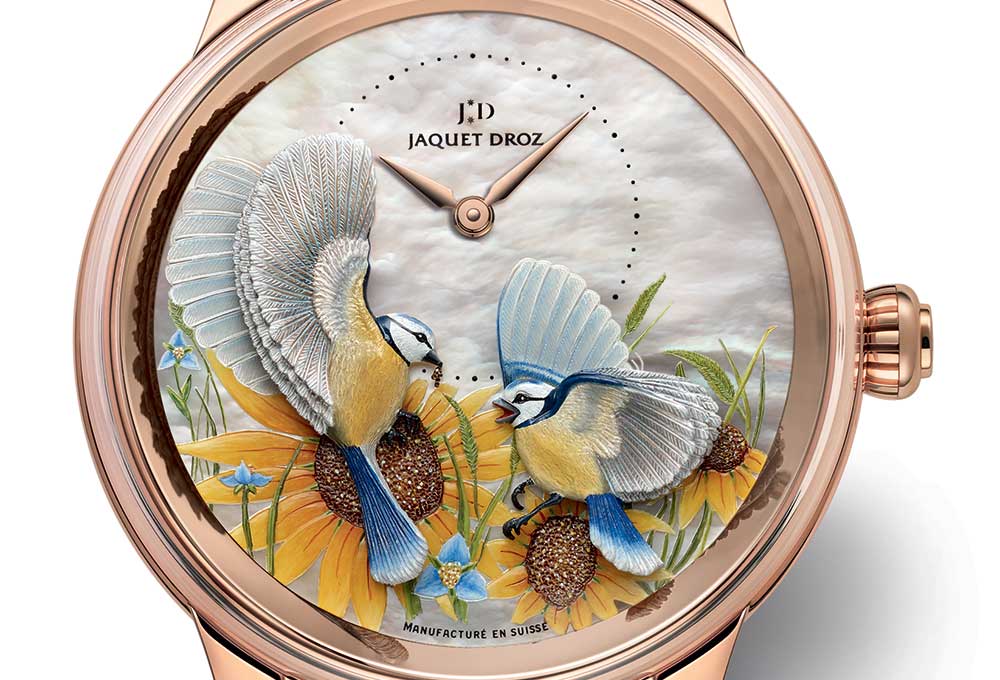 These two watches are literally feats of magic and complement an existing duo that depict the two cold seasons of autumn and winter. This time, spring and summer take pride of place and to create them, Jaquet Droz has used all its craftsmanship and artistic expertise in sculpting and engraving, miniature painting on mother of pearl, stone setting and, of course, mechanical prowess. There are just 88 examples of each of these works of art, with an individual serial number engraved on the back of the case.

The Petite Heure Minutes Seasons model dedicated to spring (my favourite), is a 41mm diameter piece in white gold. Its lugs and chapter ring are highlighted in a double row set with 272 brilliant-cut white diamonds. The dial is opalescent mother of pearl dial, painted with a branch of plum blossom. Each pink corolla has green leaf buds and the meticulous nature of the work is strikingly realistic. At the bottom of the dial, the plum blossom branch forms a perch for a couple of blue tits with their wings spread. These bird appliques in pink gold have been hand-sculpted, hand-engraved and hand-painted. A domed sapphire glass display protects this painting and gives it depth by emphasising the relief offered by the plump bodies of the two birds. The hours and minutes are offset towards midday and feature two spear-shaped hands in blue stainless steel.

The summer version of this timepiece, made by Jaquet Droz, has warm, golden, chocolate hues with a bright dial, quite different to the model described above. The blue tits look the same and are in the same place, but they appear to be hopping about in a field of sunflowers with their golden petals opened up to the sun. Two spear-shaped hour and minute hands in pink gold adorn the case.

Each timepiece features a JD 2653.Si calibre self-winding mechanical movement with a silicon balance spring and double barrel, giving it a power reserve of 68 hours.