Last week, at the Neuchâtel Observatory, the watchmaker from Saint-Imier unveiled a series of watches powered by a quartz movement, symbolising the major strides made in this technology.

Between chronometry – “The art or science of accurately measuring time” (OED) – and Longines, the love story has lasted for decades. It was in 1954, in fact, that the clockmaker was given a certification for the precision of a quartz clock by the Neuchâtel Observatory, the first in a series to be awarded in the years that followed. A precursor in the quartz field, the watchmakers from Saint-Imier again proved that this technology still has a great future at the beginning of April when they launched a new watch collection called Conquest V.H.P.

V.H.P stands for Very High Precision. We might even say “Ultra-Precision”, with two quartz movements specially developed by ETA for Longines and that will not gain or lose more than 5 seconds a year. These powerful mechanisms are equipped with a long-life battery – with an E.O.L. indication to let the wearer know when the battery’s life is over – and GPD (gear position detection) technology, which resets the watch hands in the event of an impact or exposure to a magnetic field. 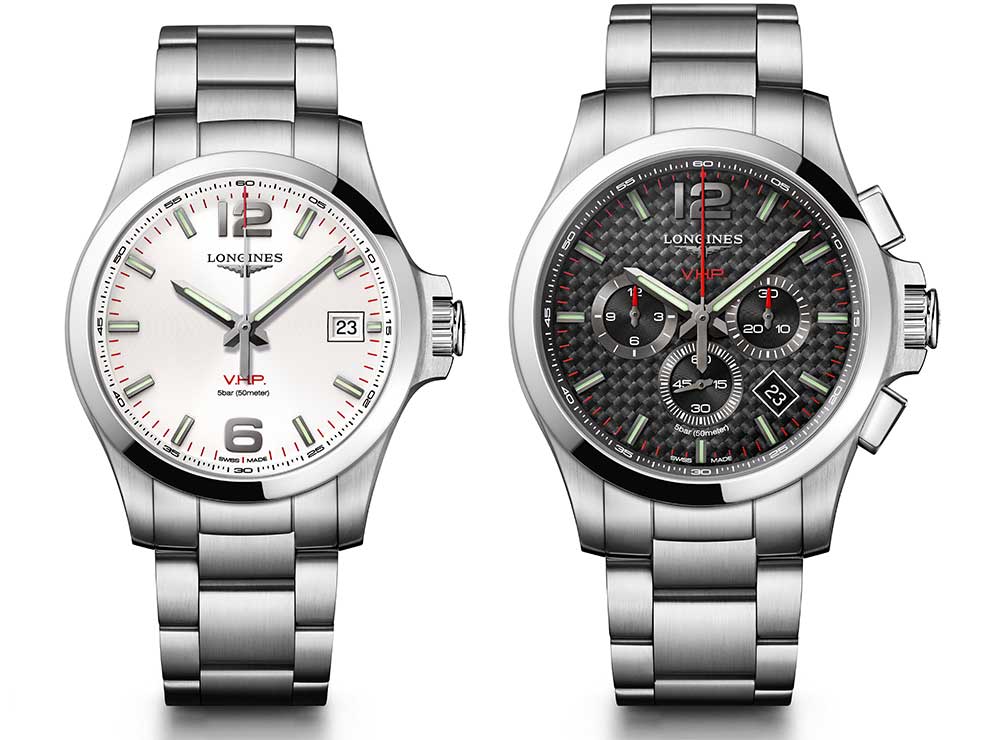 This new Conquest V.H.P collection is available in two steel models, a chronograph and a three-hand watch with the date, and they in turn are available in different diameters (42 or 44mm for the first, 41 and 43mm for the second) and several dial colours (blue, silver, black and a carbon pattern).

On the chronograph version, driven by the L.289.2 movement, the hour markers are made up of luminescent applied indices and a large Arabic number 12. The two central hands are stick-shaped and display the hours and minutes, while the seconds appear in a counter at 6 o’clock. In the centre, a red-coated second hand counts the chronograph seconds around a scale on the chapter ring. As for the minutes and hours, they are counted off in two blue subdials placed at 3 and 9 o’clock respectively. A window open at 4.30 displays the date.

The “simpler” version of the Conquest V.H.P has a very similar basic set up: the same hour markers, but including the Arabic number 6 (instead of the second counter), the same second scale displayed on the chapter ring and the same shape for the hour and minute hands. The date, however, is shown at 3 o’clock and not at 4.30.